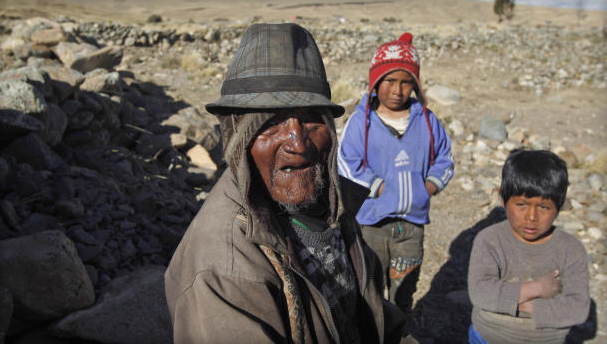 Bolivia  recently and officially honored one of its citizens as the oldest person still living and ever documented who turned 123 in July 2013.

The “Living Heritage of Humanity” award will be presented to indigenous farmer Carmelo Flores Laura whose birth date of July 16, 1890 has been officially confirmed by Bolivia’s Civil Registry Office as legitimate using his baptismal certificate. Birth certificates issued by the Bolivian government did not exist until 1940.

Flores Laura walks without a cane, does not wear glasses, and has never been seriously ill.  He credits the traditional Andean diet as key to his robust health and amazing accomplishment as the oldest person living.

Quinoa grains, riverside mushrooms, mutton and coca leaves form the mainstay of his diet along with pristine spring water flowing down from the snow capped Andes mountains. Coca leaves are a mild stimulant that stave off hunger. Mr. Flores Laura says he has chewed them all his life.

Mr. Flores Laura also enjoys pork but eats it rarely as he finds it hard to procure and no doubt to chew as he no longer has any teeth.

“Potatoes with quinoa are delicious,” he says. He does not eat noodles or rice – only barley and quinoa as his preferred grain based foods. Chuno is a traditional Andean food prepared with dehydrated and chilled potatoes.

He also walks a lot with his animals as he is a longtime herder of cattle and sheep. He used to grow potatoes, beans and oca, an Andean tuber, tilling the ground with ox-driven plows still used today by those in his village. In his youth, he hunted and ate fox and occasionally consumed alcohol.

Mr. Flores Laura lives in a dirt floor, straw roofed hut about 80 kilometers from La Paz, the de facto capital of Bolivia which is the furthest he has ever traveled. His village sits at 13,100 feet high! He speaks only his native Amyara language and not a word of Spanish.

The Guinness World Records currently lists the oldest person living as verified by original proof of birth as Misao Okawa, a 115-year-old Japanese woman. Guinness spokeswoman Jamie Panas stated that the organization was not aware of a claim being filed for the Bolivian, although it seems this may change in the coming weeks given the Bolivian government’s authentication of Mr. Flores Laura’s birth records.

Quinoa, Mushrooms and Coca Have Kept Me Alive for 123 Years