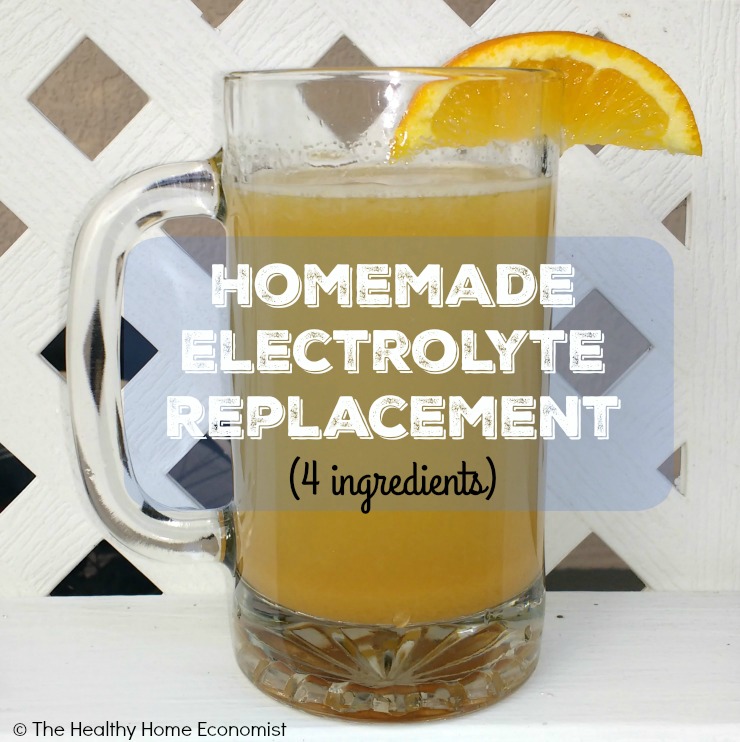 A basic skill any health-conscious parent needs to know today is how to make an electrolyte replacement when needed. I’ve written before about Switchel, which is a traditional thirst quencher and dehydration prevention drink. But, some people don’t care too much for the flavor of the drink which has water and small amounts of apple cider vinegar as the base.

I can relate as one of my children doesn’t care much at all for the sour taste of ACV even when extremely dilute in a beverage. As a result, I thought I would share how I make a homemade electrolyte replacement that appeals to that set of tastebuds too.

Commercial Electrolyte Replacements are Full of JUNK (and carcinogens)

Commercial electrolyte replacements are such nasty products! They are loaded up with chemicals, additives, and synthetics that should be avoided at all costs.

Check out the ingredients of Pedialyte, one of the most popular drinks for adults and children. It is recommended for preventing dehydration and given the thumbs up by many conventional doctors:

What’s even more shocking about these commercial electrolyte replacement drinks beyond the toxic ingredients is that they don’t have much in the way of beneficial electrolytes in them!

I mean, seriously, look at the ingredients above. There are minerals such as potassium, sodium, and zinc electrolytes. That’s it other than additives and artificial sweeteners.

Thanks but no thanks. All that junk, some of it carcinogenic, for a few measly electrolytes is not worth it. A parent can do much better than that with just a few whole ingredients and some filtered water at home!

In raising three children for 18 years, I’ve never purchased a single bottle of Pedialyte and don’t ever intend to. That stuff is nasty and should be pulled off the market in my view. It is not fit for consumption by anyone let alone children.

Sports drinks like Gatorade and energy drinks should never be given to children either. Not only are they loaded with junky additives and GMOs, but they have been found to erode tooth enamel and contribute to obesity issues just the same as soft drinks.

Years ago, one of my children had a coach who insisted that players drink Gatorade during soccer games. My very young son, who knew more than the coach on the matter, would just politely drink his water instead. He would consistently refuse the bottles of Gatorade being very aggressively pushed on him. I was so proud, but needless to say, that misinformed coach wasn’t too happy about it!

Fortunately, by the time my youngest was playing soccer, she had a coach who told the girls to drink water and never sports drinks. I was happy to see that at last, some coaches were starting to appear who actually read the research instead of getting sucked in by sports marketing hype.

Don’t you just cringe when you see a little kid at a sports event toting around a monster Powerade bottle? Do these parents have any idea how much GMO sugar and chemicals are in this stuff?

It’s much better to just give these kids plain bottled water to drink during events or a bottle filled with a homemade electrolyte replacement with real, healthy ingredients.

Below is my recipe for a simple electrolyte drink that is tasty as well as effective. It is excellent for rehydrating after a hot sporting event, hydrating a day or two before a sports event, and/or recovering from the dehydration caused by a tummy bug.

Another yummy drink that replaces electrolytes quickly is homemade orangina. 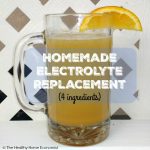 Easy recipe for homemade electrolyte replacement to drink after working out or dehydration from a stomach bug. Healthy sub for unhealthy sports drinks!

Use spring water or natural mineral water for this drink. Do not use club soda or reverse osmosis (RO) water. RO water is devoid of minerals and club soda is commonly made with RO or tap water.

I prefer Himalayan pink salt for an electrolyte replacement because it is land sourced. This type of sea salt is a lower risk for microplastic contamination and has over 80 minerals. Other sea salts like Real Salt contain about 60.

The azomite powder (volcanic rock dust) is listed as an optional ingredient to add even more electrolytes. It has not been specifically approved by the FDA for human consumption. If you feel more comfortable relying on the sea salt alone for the electrolytes in this beverage, that is fine. Here is more information on the safety of azomite according to the Weston Price Foundation:

It [azomite] is safe for human consumption. I recommend it because it is a natural, inexpensive mineral supplement. Tests have never been done on humans and won’t be because the FDA won’t allow it. There have only been studies with animals and it is a good mineral supplement for animals.

It does contain aluminum, but it is also rich in silica, which counteracts the aluminum. People have been eating clay and dirt as a tradition for thousands of years and all clay contains aluminum and silica (1).

How to Make & Use Solé Water (and why its beneficial!)

How to Separate Whey from Plain Store Yogurt (+ VIDEO)