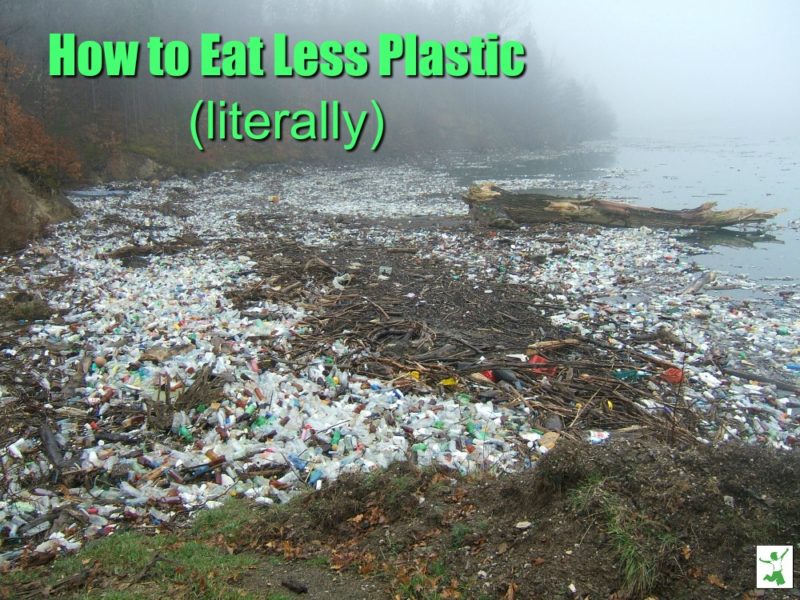 When we think of eating plastic, what usually comes to mind are sea turtles mistaking plastic bags for jellyfish or large sharks with stomachs full of ocean trash.

The harsh truth is that the level of plastic pollution in the world is now so pervasive that tiny pieces of microplastic are turning up everywhere in nature with humans all across the globe…including you and me…eating plenty of it too!

A Credit Card per Week of Microplastics

According to research conducted at the University of Newcastle in Australia, the average human is now potentially eating approximately 5 grams (a credit card’s worth) of microplastics every week. This equates to about 2000 tiny pieces that are 5 mm or smaller in size… imperceptible in most cases. (1)

Another study published in June 2019 estimates that the average American ingests at least 74,000 microplastic particles every year just by eating, drinking, and breathing. (2)

There is so much plastic everywhere that we inhale tens of thousands of tiny plastic fragments or fibers every year. (3)

So, the question really isn’t how to avoid eating microplastics. It is already in our food and water supply!

We are ALL eating it folks.

“It’s in all of us and we can’t escape consuming plastics”, says Marco Lambertini, Director General of the Worldwide Fund for Nature.

The real question, then, is how to eat as little as possible, because as Pete Myers, Ph.D., founder and chief scientist of the nonprofit Environmental Health Sciences and an adjunct professor of chemistry at Carnegie Mellon University, bluntly says,

There cannot be no effect. (4)

How to Avoid Eating, Drinking and Breathing Microplastics

Research into the effect of microplastics on human health is very new.

However, the small number of studies to date are ominous.

There is evidence in animals that microplastics have the ability to get into the brain, bypassing the hardy membrane that is supposed to protect it from foreign matter that gets into the bloodstream. (5)

Mothers may pass microplastics onto a developing fetus via the placenta according to as yet unpublished research presented at the Rutgers Center for Urban Environmental Sustainability. (6)

Then there are the hormone-disrupting problems that emerge from the chemicals…bisphenol A (BPA) and phthalates…in the microplastic particles themselves.

The bottom line is not to wait for evidence to emerge as front-page news that microplastic consumption is a huge problem.

It is best to be pro-active and start developing strategies now for avoiding them.

Here are my top 6 suggestions to consider.

Testing of various foods reveals that sea salt is one of the most microplastic contaminated foods on the planet.

This is terribly sad as consumption of pure sea salt with all its beneficial trace minerals is a boon to health!

However, sea salts derived from the oceans are now regularly found to contain hefty doses of microplastics.

Greenpeace estimates that the average person consumes over 2000 microplastic particles per year from salt alone.

Celtic sea salt is my favorite, but I don’t buy it anymore. This type of sea salt produced by evaporation of seawater has the highest level of plastic contamination. (7)

Given that plastics, particularly tiny pre-production pellets known as nurdles now pollute even the most remote beaches, this is not so surprising. (8)

While avoiding microplastic contamination in salt is likely impossible at this point, you can definitely minimize exposure by using land-based sea salt, mined as far away from waterways as possible.

I personally prefer North American based sea salts (like this one) given that the amount of plastic pollution in Asia is far greater at the present time. Hopefully, the situation there will improve in the coming years as developed countries stop shipping their plastic trash there and start using ecologically sound alternatives instead. Recycling plastic isn’t the answer. Weaning ourselves off plastic dependency is the answer. (9)

Research shows that water bottled in plastic has roughly double the number of microplastics as tap water. (10)

Think your bottled water is special? Probably not. Testing indicates that 93% of the bottled waters from around the world are contaminated. (11)

Filter that tap water with a quality water filtration system, and the amount of plastic ingested goes to virtually zero.

And no, a cheap pitcher filter that simply improves the taste of tap water is not going to do the job.

If you are relying on water from plastic bottles for hydration, it is time to make the switch to reusable stainless steel or glass water bottles filled from a filtered kitchen tap and ditch the plastic for good.

Skip Beverages Made with Unfiltered Water

Beer is potentially one of the most microplastic contaminated beverages. Researchers from the University of Minnesota detected microscopic fibers and particles in every sample of 12 brands of beer made with water from the Great Lakes. (12)

While definitely a logical leap, it is not so far fetched to assume that any bottled or canned beverage made with water that isn’t properly filtered is going to be contaminated.

The best alternative? Make your own homemade beverages with filtered water from your tap.

Second best? Consume beverages from brands that use filtered water.

Premium tea packaged in mesh tea bags is one of the biggest sources for microplastic ingestion. Frequently, these brands are organic, which makes the choice of packaging in plastic even more shocking.

Paper tea bags or buying tea in bulk is a much better way to enjoy your tea!

I haven’t found any data on microplastics in produce. However, it would seem safe to assume that the levels would be far lower than processed foods.

Avoid all items that come in cans, tetra packs, and cartons as these packages are lined with plastic that almost certainly leaches into the food.

Avoid takeout and drive-through fast food as much as possible too, as the paper used to wrap the food or line the styrofoam/pizza box containers are commonly treated with plasticizing PFAS chemicals that are linked to cancer.

It amazes me that some people actually still heat plastic-wrapped food in a microwave! Warnings against the practice have been going around for many years.

Use common sense. Don’t heat or otherwise microwave food that is in contact with plastic – ever.

The American Academy of Pediatrics also recommends not putting plastic in your dishwasher. Wash in lukewarm water with mild dish soap only. (13)

The most dangerous kinds of plastic are those with recycling codes “3,” “6,” and “7”. These numbers indicate the presence of phthalates, styrene, and bisphenols.

The safest type of plastic, if there is such a thing, are those labeled as “biobased” or “greenware,” that do not contain bisphenols. But, they absolutely do contain other petrochemicals, so don’t be lured into a false sense of security with them.

What strategies are you following in your home?

#1 Item to Stock Up on NOW (why is no one talking about this?)