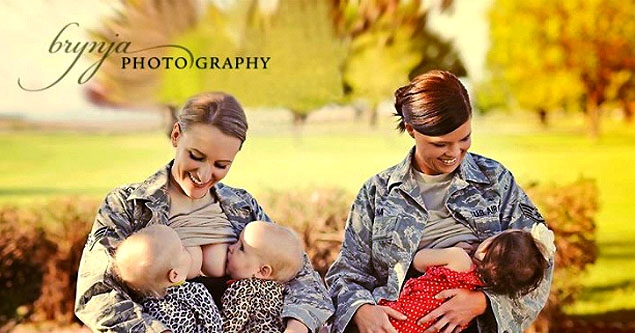 It is the ultimate expression of femininity and being a woman.  It is a magnificent, selfless act of love that nourishes one’s newborn with perfect physical nourishment and strong emotional bonds that will last a lifetime.

You can imagine my surprise when I learned about a couple of military Moms who caught some serious flack when tasteful, professional photos of themselves breastfeeding in uniform on an Air Force base began circulating online.

Washington Air National Guard spokesman Capt. Keith Kosik said that a formal military response to the photos which have gone viral since being posted at BreastfeedinginCombatBoots.com was necessary as they were a violation of regulations against using the uniform to promote a civilian cause.

I beg your pardon, Captain, but breastfeeding is not a civilian “cause”.   It is the simple act of feeding your baby, something that has been performed by Mothers far longer than armies have roamed the earth in fact!

Would pictures of women feeding their babies with bottles while in uniform have gotten a “formal response” from the military if these photos had been posted online?

What’s really surprising is that some breastfeeding Moms were also critical of the photos with one commentor on BreastfeedinginBoots.com posting the following:

“I would never nurse in uniform. I took my child to the bathroom or a private office when her nanny brought her to me …. Not because I was ashamed of nursing, nor of being a mother. All the guys knew I pumped. The military is not a civilian job. We go to combat and we make life or death decisions, and not just for ourselves but for those we lead. The same reason I would never nurse in uniform is the same reason I do not chew gum, or walk and talk on my cell phone, or even run into the store in my utility uniform. … We are warfighting professionals. Women before us have worked too hard to earn and retain the respect of their male peers. I don’t want my Marines to look at me any other way than as a Marine. When I am asking them to fly into combat with me and do a dangerous mission, I do not want them to have the mental image of a babe at my breast. I want them to only see me as a Marine. Let’s be a realistic folks. We give up many freedoms being in the military…Breastfeeding in front of my fellow Marines was one of them.”

With all due respect, but would you like to eat in the bathroom?

Nursing is not akin to going to the bathroom and therefore should not be relegated to this type of atmosphere where airborne germs and other potential threats to a nursing baby may abound.

We clearly have a long way to go in this country when it comes to understanding the role of Mom as both protector and nurturer.

A Mom nursing in uniform is a proud display of both in action and the military would be well advised to support this activity rather than reprimanding it.

What do you think?  Should a Mom be able to breastfeed anywhere at any time even when on duty keeping our country safe?

Sources: Military Mom Proud of Breastfeeding in Uniform Despite Criticism

Breastfeeding Moms in Uniform Photos Were out of Line: Military