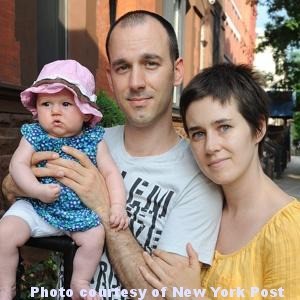 When ignorance about breastfeeding coincides with an irrational fear of terrorists, what do you get?

A very nasty scene at a ritzy New York Country Club, that’s what!

This is exactly what Belgian diplomat Tom Neijens and his wife Roseline Remans discovered when they stopped by the Metropolis Country Club in White Plains, New York on June 8, 2013 and inquired about having lunch.

Club employees permitted the family to dine on the terrace despite the fact that they weren’t members, whereupon Remans began to discreetly breastfeed her daughter Luka at the table.

Neijens, first secretary of the Belgium Mission to the UN, told the New York Post that a female employee of the club quickly interrupted Roseline’s perfectly legal and proper feeding of her baby with this sharp rebuke:

“Please leave immediately, you are disturbing the members!”

When Neijens protested and said it would only take a few minutes, the female staffer insisted that Remans finish in the restroom.

Understandably incredulous at the blatant ignorance on display at such a high end establishment, Mr. Neijens inquired why a baby would be asked to have lunch in the restroom when adults are not.

Mr. Neijens described the chaotic scene as something straight out of a Western movie with the officer walking around like John Wayne with “one hand on his gun, one hand on his Taser.”

The officer warned the couple that they were trespassing despite the fact that country club staff had given them specific permission to dine.  He also said that some fearful members thought Mr. Neijens’ black backpack indicated they were terrorists.

Most laughable if not actually true, is what the officer came out with next when a tearful Ms. Remans asked why terrorists would breastfeed at a ritzy club:

“In Sri Lanka, babies are used by terrorists.”

Well, you learn something new every day, don’t you?

Attention all breastfeeding mothers. Your milk engorged breasts are actually considered weapons of mass destruction by law enforcement authorities. That liquid is NOT food for your baby. It is actually highly explosive material that could detonate at any time, sparking a chain of events identified by the media as bona fide terrorist activity.

He dismissed his over the top behavior by explaining that the club had received terrorist threats in the past.

Despite the fact that they were doing nothing illegal or improper and possessed proper identification, the couple was still escorted off the premises via the back door.

“I am deeply worried about your staff if they cannot distinguish between a European couple looking for a quiet place to breast-feed a baby and suicide terrorists carrying a backpack.”

Lt. B.J. Ryan, a spokesman for the Greenburgh Police Department, labeled the incident as a simple “cultural misunderstanding.”

Ahem. On behalf of breastfeeding mothers everywhere, I beg to differ.

Breasts are not “cultural” and there is no “misunderstanding” their true purpose. They are the universal instrument for optimal feeding of babies.

Couple “treated like terrorists” over breastfeeding and backpack at ritzy restaurant

What You Need to Know for a Successful VBAC