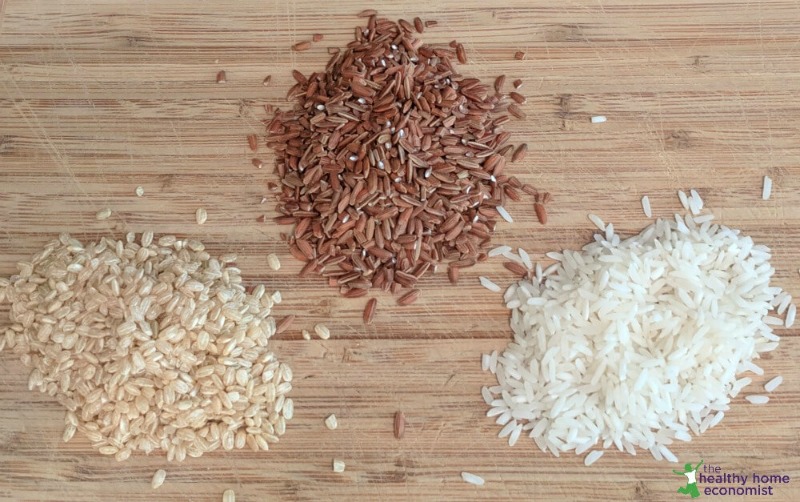 Red rice is a whole grain that is becoming more widely available across the world. Its popularity is on the increase as well.

While many people (me included!) assume at first glance that it is hybridized, the truth is that red rice has heirloom origins from more than a millennia ago.

Anthropologists believe that red rice was first cultivated by humans during the Tang Dynasty which began around 800 AD. Doctors during this period utilized it to facilitate the healing of health issues related to the blood. Improvement of digestion is another common medicinal use of red rice in Traditional Chinese Medicine (TCM).

In Asian cuisine, red rice served as a natural food coloring. In some parts of China, it was a dietary staple, favored over both polished and brown rice. (1)

Interestingly, red rice is not native to China. The primary species, Oryza punctata and Oryza longistaminata, are grasses from tropical Africa, including the island of Madagascar.

Like heirloom wild rice, it grows in shallow waters of various kinds and thrives best in either clay or sandy soils. Due to its reputation as a noxious weed in non-native areas, it is sometimes referred to as weedy rice.

So, how did a wild annual grass end up being cultivated for the first time in China, thousands of miles away? The answer to this is likely the Silk Road. This ancient network of trade routes allowed for the flow of goods between East and West. It dominated the cultural interaction between these regions from the Han dynasty (207 BCE) to the early 1700s.

Red Rice vs Brown or White

When you first taste it, red rice has a decidedly nutty flavor. In my opinion, the flavor is even more pronounced than brown rice.

Hence, if you are a brown rice lover, you will definitely want to try it!

If you prefer white rice, however, you may find the texture and flavor of red rice off-putting. Because it is unpolished, the earthy taste and al dente feel on your tongue may prove undesirable, even when thoroughly cooked.

Red rice is not to be confused with red yeast rice.

While red rice is simply a variety of whole grain rice, red yeast rice is a form of fermented white rice (koji).

It is the fermentation process that gives red yeast rice its distinctly reddish-purple color. This unique hue occurs from cultivating the mold Monascus purpureus on polished rice. As this colorful species of yeast grows, it gradually causes the color of the white rice to change.

While those with mold or yeast allergies may wish to steer clear of red yeast rice, thoroughly cooked red rice should pose no concerns.

Red rice is much higher in fiber than both short and long grain white rice. This is because the hull is intact. This means that the rice grains remain unpolished.

Fiber content is about the same per serving when compared to brown rice, however.

In fact, the nutritional benefits of red rice are strikingly similar to brown rice in almost every way.

The nutritional benefit unique to red rice that is not found in most other varieties is an ample supply of anthocyanins.

This substance is a flavonoid with powerful antioxidant effects that fight free radicals. It also exhibits anti-inflammatory, anti-viral and anti-carcinogenic effects.

Health Benefits in the Scientific Literature

A survey of the scientific literature to date reveals that most research involves a study of red yeast rice.

Fermented red rice is quite different from plain red varieties as described above. Thus, it would be misleading to attribute any health benefits of koji to consumption of unfermented dishes containing Oryza punctata and Oryza longistaminata.

However, the Journal of Agicultural and Food Chemistry did publish a study recently that examined the health benefits of pigmented rice containing anthocyanins, which red rice contains in particular abundance in the bran layer.

Most notably, the highest enzyme inhibition and glucose uptake were observed in red rice bran. (3)

In short, if you are diabetic or pre-diabetic, it might make sense to stick with red rice as much as possible in lieu of brown or white. Of course, discuss with your practitioner first before making any decisions!

Should You Soak Red Rice?

It is desirable to take the time to soak red rice prior to cooking. This is true even with organic red rice brands. Package instructions that say to simply mix with water, bring to a boil, and cook for about 30 minutes until tender are best ignored.

This is due to its cultivation in water. Depending on location, soil characteristics and air pollution levels, rice crops can take up large amounts of arsenic.

Soaking rice before cooking reduces arsenic levels by a very large percentage according to scientific research.

Another reason to soak rice before cooking is to reduce levels of anti-nutrients in the rice hull.

In sum, a thorough overnight soak will render your home-cooked rice dishes eminently more digestible. As a bonus, you may notice that you don’t eat as much because your body will feel full faster.

Another option on the market is sprouted red rice. I buy this brand.

While germinated rice grains are more nutritious than ungerminated and lower in anti-nutrients like phytic acid, you will most likely still need to soak before cooking.

This is due to the arsenic issues with rice crops as described above.

The one exception to this is if you are very confident of your rice source. If the company you buy from regularly tests its products for arsenic (like this brand), then you can make the call to cook sprouted rice without soaking first.