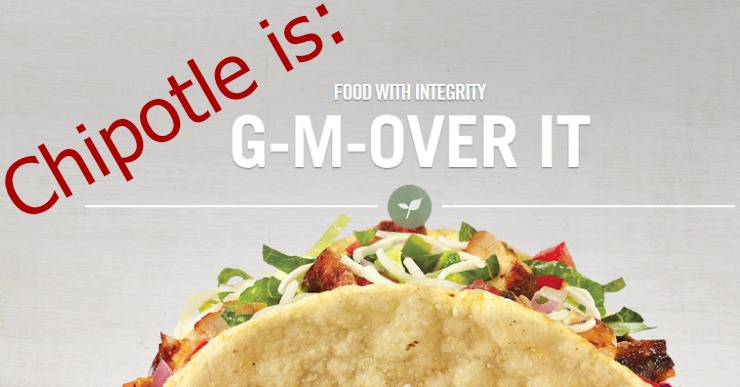 Never before in history has humanity been so in need of those who challenge conventional thinking, tear down barriers and take a sledgehammer to preconceived ideas. This is especially true in the economic sector concerned with food production and distribution.

While a growing number of individuals and small companies are willing to step outside the box to help create a new food culture, large corporations have by and large dug in their heels in favor of the toxic status quo. Shareholder profits and excessive executive salaries continue to be the overwhelming focus rather than creation of quality products that won’t harm the consumer in the short or long term.

A well known exception to this is the Chipotle chain of restaurants, where founder, Chairman, and co-CEO Steve Ells continues to push the envelope in the direction of changing the face of fast food in America for the better. Only one year ago, I wrote this post about the genetically modified ingredients on the Chipotle menu, despite the fact that much progress had been made with many local, pastured options available.

Now, Ells has done what no other large restaurant chain has yet been able to accomplish in America: go GMO free with all of its supply chains for prepared foods. The only exceptions are the selection of beverages still manufactured using genetically modified corn and GMO animal feed used by some of the chicken and pork farmers.

Here’s what the Chipotle website said of the announcement:

While some studies have shown GMOs to be safe, most of this research was funded by companies that sell GMO seeds and did not evaluate long-term effects.  Evidence suggests that GMOs engineered to produce pesticides or withstand powerful chemical herbicides damage beneficial insect populations and create herbicide resistant super-weeds.

While health advocates and foodies across North America emitted a collective shout of joy at the Chipotle news, one reader hit the nail on the head when I posted about it on the Healthy Home Economist Facebook page.

Monsanto will probably sue them.

Bingo. While it seems impossible that the GMO titan could do anything about Chipotle’s free market decision to abandon all supply lines that include genetically modified crops and foods, the pessimism is not so far fetched.

Improbably, Monsanto has for years been suing and winning court cases against organic farmers who have had their livelihoods destroyed by GMO cross pollination contamination through no fault of their own. Even the United States Supreme Court upheld the biotech giant’s claims on genetically-engineered seed patents and the company’s ability to sue farmers whose fields are inadvertently contaminated with Monsanto materials (1).

Monsanto arrogance extends to a contempt for the rule of law as well with attempts to stop state legislation to require labeling of genetically modified ingredients. Vermont and Hawaii are most prominently in the crosshairs as of this writing.

The Vermont lawsuit by the Grocery Manufacturers Association (GMA) of which Monsanto is a member asserted: “Act 120 imposes burdensome new speech requirements — and restrictions — that will affect, by Vermont’s count, eight out of every ten foods at the grocery store.”

Most shockingly, however, the gargantuan food lobby asserted that the new GMO labeling law violated its right to free speech (2)

In Monsatan speak, this is translated as the right to evade, deceive and lie.

In Hawaii, Monsanto and Dow are suing to stop implementation of a voter backed initiative in Maui to ban the cultivation of GMOs. Monsanto Vice President John Purcell said the law is a violation of state and federal laws that allow for the safe and legal cultivation of GMO products (3).

Monsanto and its biotech allies have even pulled out the stops to put a halt to the approximately two and a half dozen other state initiatives to require GMO labeling by pushing for a law at the Federal level that would outlaw local GMO food labeling laws while permitting “voluntary” labeling of genetically modified ingredients (although voluntary labeling is already allowed by the Food and Drug Administration) (4).

With both organic farmers and state governments in its crosshairs, what’s to stop Monsanto from suing another corporation?

I, for one, think it is highly probable if not likely.

While such a lawsuit would certainly be outrageous, Monsanto has long ago set a precedent for such presumptuous litigious behavior.

Chipotle’s GMO free announcement is a very decisive nail in the coffin for GMOs in North America with or without labeling. One thing is for sure, however: Monsanto is not about to go quietly. Astroturfed news stories about the “safety” of GMOs and how they are going to “feed the world”, Chipotle smear campaigns, takedown pieces about how Steve Ells is a “science denier”, and potential lawsuits are the likely result of the restaurant chain’s “no GMOs” line in the sand.

So sit back and watch the drama unfold. Just be sure to do it from the comfort of your local Chipotle while enjoying a GMO free burrito.

Roundup and Glyphosate: Quick Death for Weeds, Slow and Painful Death for You