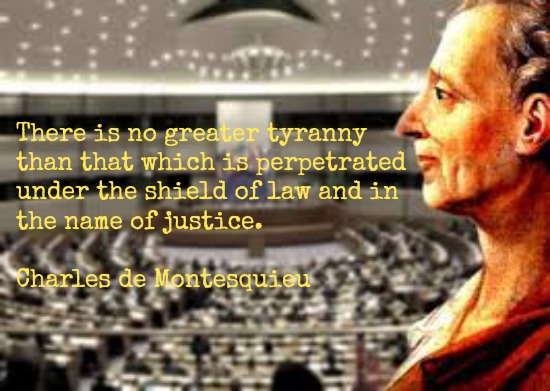 You know things have gotten really bad and tyranny is basically at your doorstep when the legislature of a government that’s gotten far too big for its britches starts passing “laws” favoring a small group of corporations and the patented products they produce without any debate or even a vote.

Sound hard to believe and completely unconstitutional at least in the United States?

It happened recently when The Monsanto Protection Act was first passed in March 2013.  Quietly and without debate, it was added to a bill (called the Continuing Resolution) which continued to pay the government’s bills through September 30, 2013.

Politico reporter David Rogers explained in his expose “Big Agriculture Flexes its Muscle,” that this rider favoring Monsanto was never voted on. Rogers, a seasoned political reporter, describes how the Monsanto Protection Act became law “with little or no floor debate and in a period of turmoil.”

According to the Organic Consumers Association, “the backroom deal that made the Monsanto Protection Act law generated a public backlash. It was the subject of a Daily Show episode. And it helped spawn a worldwide March against Monsanto, reported on by the New York Times.”

On September 30, 2013, the Monsanto Protection Act should sunset for good.

However, on September 20, 2013, the U.S. House of Representatives passed its version of the Continuing Resolution (H.J.RES.59), a bill to keep the government running through December 15, 2013. The bill already promises to force a showdown with the Senate because it includes a provision to defund Obamacare.

People, if you’ve never picked up the phone to call your Senator before, today is the day to do it!

**Please call your Senators right away and ask them to pass a clean version of the Continuing Resolution, one that doesn’t extend the Monsanto Protection Act.

The phone number for the Capitol Switchboard is (202) 224-3121.  Call and ask to be connected with your Senator (give the operator your state). Alternatively, you can find the individual senators’ phone numbers here.

“I’m calling to ask the Senator to oppose the Farmers Assurance Provision, sometimes referred to as the Monsanto Protection Act, and to vote no on any bill, including the Continuing Resolution, which includes the provision.”

If you want to go into more detail, you can add:

“New GMOs aren’t regulated enough as it is. Even the American Medical Association complains that the Food and Drug Administration doesn’t safety test new GMOs for human health risks before allowing them on the market for human consumption. The AMA last year recommended that GMOs undergo mandatory premarket safety testing.

“The U.S. Department of Agriculture does conduct a mandatory review of new GMOs, but not for human health risks.

“The USDA is notorious for ignoring the impact new GMOs will have on organic and non-GMO farmers who experience serious economic losses when their crops are contaminated.

“In recent years, the courts have had to step in and stop the planting of new GMOs. The courts did this by requiring that the USDA complete a thorough Environmental Impact Statement before approving a controversial crop. The Monsanto Protection Act strips the court of its constitutional power to review executive branch decisions, which means the courts can no longer intervene in order to protect the public. Now, the USDA can rubber-stamp new GMOs and, even if serious harm could result, the court can’t stop them from being planted.

“I hope the Senator will work to stop the Monsanto Protection Act from being extended past September 30 and vote against any bill that includes it.”

Thank you for your help in righting the terrible wrong that was committed against the American people last March.  Let’s kill the Monsanto Protection Act for good.

UPDATE:  Well done friends!  It looks like we have a victory to celebrate.  According to the Food Revolution Network:

“Yesterday, the Senate stripped the “Monsanto Protection Act” from its version of the continuing resolution to keep the government funded.

This controversial piece of legislation, which is still in effect until the end of this month, allows biotechnology companies to sell genetically modified seeds even if a court blocks them.

It was snuck into a government funding bill six months ago, and the House voted to extend it last week. But the Senate, led by Senator Jeff Merkley and others, decided that protecting Monsanto at all costs was not necessary in order to keep the government running.

No one really knows what’s going to happen when the House and Senate try to reconcile their very different government funding bills. But any way you slice it, this is a big victory for those who love real food.”

And now in 2019, with Monsanto (now owned by Bayer), getting taken to court by thousands of plaintiffs with the latest being awarded $2 billion in damages, being stripped of its legal protections is having a severe effect.

Why It’s Time to Go Primal With Your Personal Care

Seeds of Change Garden is Underway!

How to “Split a Cow” and Save Big with Beef Shares