7 Benefits of Breast Ultrasound Instead of Mammogram

The benefits of yearly breast ultrasound instead of a mammogram and why some GYN doctors keep this life-saving information from their patients. 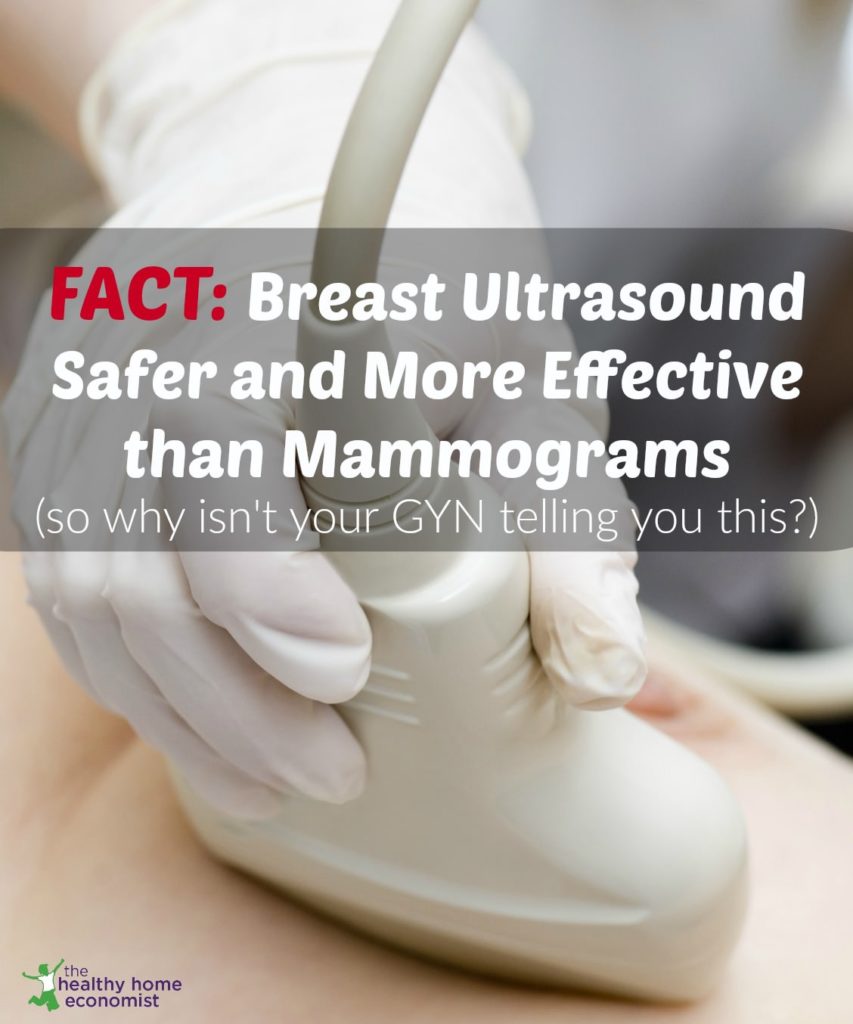 It’s hard to imagine a more backward, outdated, and damaging approach to detecting breast cancer than the annual mammogram. Place breasts between two plates, compress them hard (to the point of pain for some women), and douse with more radiation than 1000 chest x-rays combined (1 rad). All this … on an annual basis!

If you don’t have breast cancer already when you walk in the door, the chances are very real of developing it from repeated, annual exposure to this insanely high level of ionizing radiation! Worse, the vigorous breast compression actually encourages the spread of an existing malignancy.

According to  Dr. Samuel Epstein MD, one of the world’s top cancer experts:

“The premenopausal breast is highly sensitive to radiation, each 1 rad exposure [per mammogram] increasing breast cancer risk by about 1 percent, with a cumulative 10 percent increased risk for each breast over a decade’s screening.” (1)

Dr. Charles B. Simone MD, a former clinical associate in immunology and pharmacology at the National Cancer Institute, says:

Mammograms increase the risk for developing breast cancer and raise the risk of spreading or metastasizing an existing growth. (2)

The pure lunacy of mammogram screening is why I’ve never had one and never will, even though at my age, I am “supposed” to already have had more than ten!

So what does a well-researched woman who understands the dangers of mammograms do instead?

Thermography Not a Perfect Choice

Many women who have turned away from dangerous mammography are getting breast thermography instead. While this is a safe screening test, it is unfortunately not the perfect substitute for mammograms in all situations.

For example, if a suspicious area is noted during thermography screening, a woman still is forced to go get a mammogram to check it out further. This happened to me a number of years ago (story here).

The hospital radiologist who conducted my breast ultrasound discovered that the lump was just a clogged duct. But … she bullied me the entire time for skipping the mammogram even though there was absolutely no downside in doing so! In fact, skipping the mammogram and getting only a breast ultrasound on a yearly basis is the smartest way to go! It is also far less expensive than thermography.

It was astonishing to me the gigantic hoops I had to jump through and the doctor bullying I had to endure to get a safe breast ultrasound instead of a carcinogenic mammogram. The questions that swirled around in my head were:

Why are doctors and labs so aggressively blocking breast ultrasound as an alternative to mammogram as a first line diagnosis option?

Why are women forced to get a dangerous annual mammogram BEFORE they are permitted to get a safe breast ultrasound, which is far more effective at detecting breast cancer anyway particularly for the 50% of women with dense breasts?

You know the sad answer. Ultimately, it is a money thing. Mammograms make gynecologists and labs far more money than breast ultrasound alone. The fix is in when it comes to gynecologists, labs and mammogram madness.

Mammogram Monopoly is Starting to Crumble

The mammogram monopoly is starting to crash, however! Now any woman can choose to skip out on a dangerous annual mammogram and get a safe breast ultrasound instead.

Bonus: a breast ultrasound is far more effective at detecting breast cancer. So, the huge problems of false positives, misdiagnosis and overtreatment decline substantially too!

Best of all, you can NOW get a breast ultrasound without a prescription, which means you don’t have to beg your doctor to write you a script for one instead of a mammogram. Given my experience in the years since my Dad retired from medicine, you can do all the begging and cite all the research you want. THEY WON’T DO IT.

Mammograms are big business! If you want to avoid them, you are going to have to go a completely different route.

Here’s what I did. I discovered the company Herscan from a recommendation from an alternative physician. This company is FINALLY providing this long overdue service of breast ultrasound only without a prerequisite screening mammogram.

7 Benefits of Breast Ultrasound over Mammogram

Here are the 7 benefits of getting a breast ultrasound from Herscan and TOTALLY SKIPPING your annual mammogram – FOREVER.

It’s time to break the back of the mammogram mafia in the United States. Women IN DROVES need to start opting out of these dangerous annual exams and take their power back by getting annual breast ultrasound instead.

Thank you to Herscan for this tremendously important, lifesaving service to all women! You can book your appointment today by clicking here.