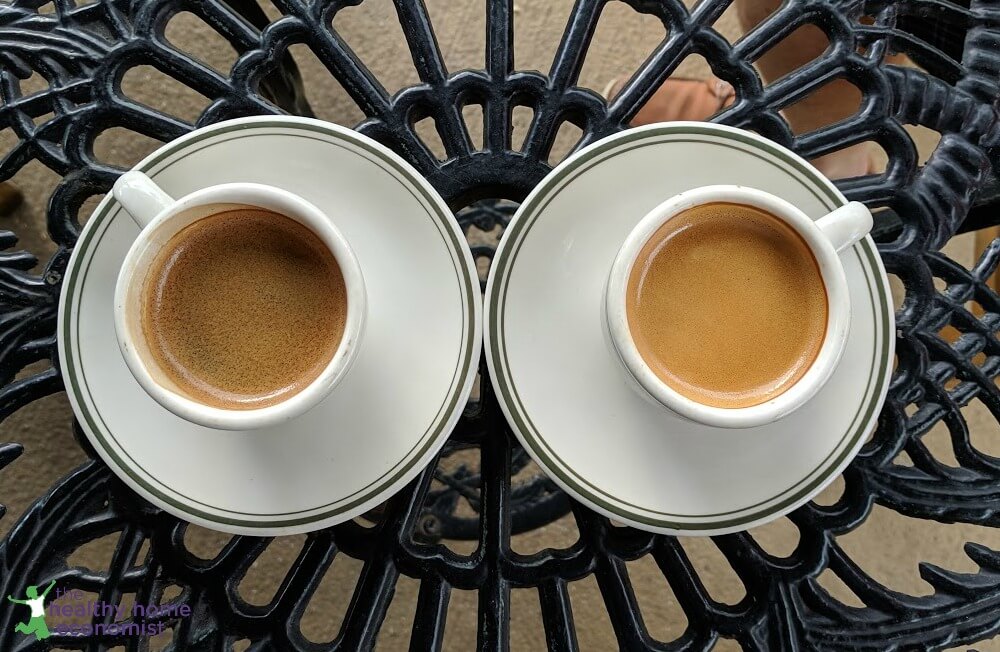 In our stressed out/sleep deprived culture, daily caffeine consumption can be a risky practice. The potential for developing an addictive habit is very real.

Visual symptoms such as deep lines/creases in the cheeks, balding lower legs, or lines in the fingertips may eventually appear. Fatigue and sensitivity to bright sunlight are other common adrenal fatigue symptoms from caffeine overconsumption.

Lifestyle guru Tony Robbins is reportedly so against caffeine – ever – that he dives into a cold swimming pool every morning to wake up – an interesting counterpoint to the bulletproof coffee narrative.

It seems to me that neither of these extremes is a desirable way to live. An occasional cup of coffee or shot of espresso is not such a terrible thing that it needs to be banished from your life forever providing there is no history of a tendency toward addictive behavior. (1)

When enjoyed in moderation, it can be a nice treat much like the odd dessert to celebrate a special occasion.

I myself do not drink coffee, but do enjoy a shot of espresso from time to time when out for a celebratory event.

If you are an occasional coffee or espresso fan too, have you ever wondered which is the best choice – blonde (light) or dark roasts?

Here’s what I found out. Is the one you prefer the best choice?

Visually speaking, light roast coffee beans are easily distinguishable from dark roast. See the picture below where the blonde roast on the left is significantly lighter in color. 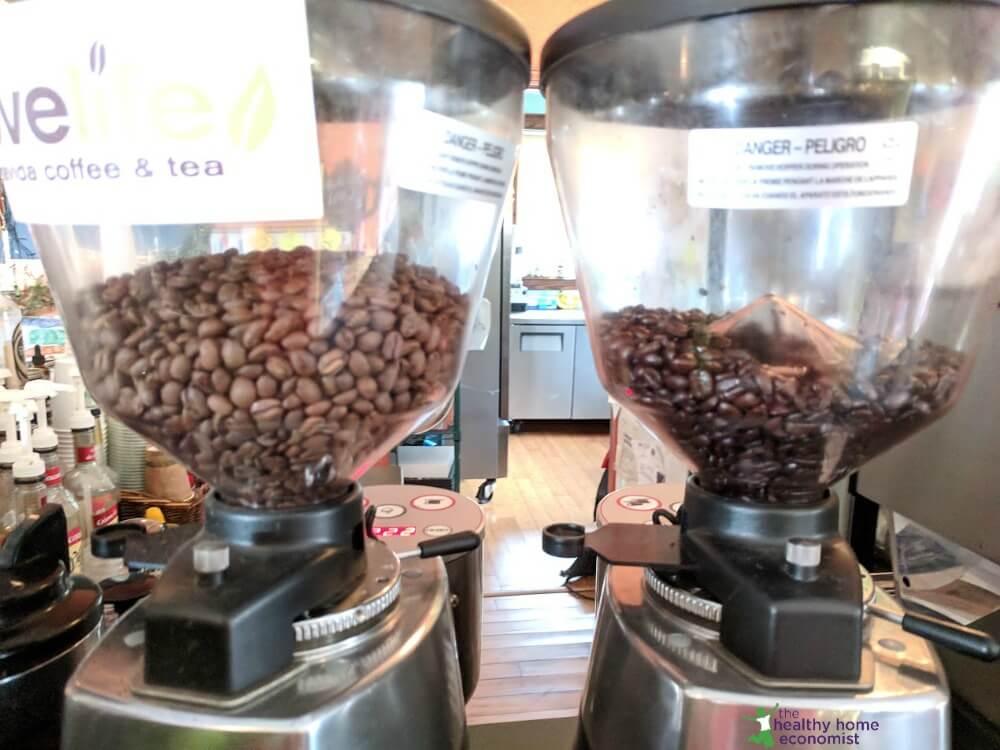 Some people believe that dark roast coffee contains more caffeine because it is stronger tasting. Others believe light roast contains more because the longer roasting process for dark beans eliminates more of the caffeine.

The truth is that caffeine if affected very little by the roasting process, which rarely exceeds 470 °F/ 243 °C. Any significant variation would require a roasting temperature above 600 °F/ 315 °C. As a result, a coffee bean’s caffeine content remains relatively static no matter what the roast level. (2)

What does change during roasting is the size of the beans. See in the picture above how the light roast beans are different in size from the dark roast beans. This is because the dark roasting process eliminates 90% of the water in a coffee bean. This variation in size causes the caffeine content to fluctuate depending on whether you measure the beans by volume or by weight.

Thus, do not choose a dark roast over a light roast (or vice versa) strictly based on caffeine content. The amount between the two will vary a bit, but not by a lot.

If you sipped the two cups of espresso in the picture above, you would notice a stark difference in taste.

Light roast espresso is quite sour with a strong lingering aftertaste. If you enjoy eating unripe bananas, you probably find it appealing.

Dark roast espresso is much richer tasting and distinctly more bitter with little to no sourness.

The first time I (unknowingly) tried a light roast espresso, it was so sour I thought it had gone bad! Finding the taste completely repelling, I actually tossed it after a few sips.

Ultimately, there is no better or best when it comes to the taste of light roast vs dark roast espresso or coffee. Choose the one that suits you taste buds.

One of the most notable differences between light and dark roast coffee is the amount of acrylamide each contains.

What is acrylamide? It is a carcinogenic substance that is created when starch is roasted, fried or otherwise  heated.

While the risks are certainly low if you consume coffee or espresso only occasionally, it is still important to note the differences in the amount of acrylamide between blonde and dark roasts.

While acrylamide is created during the coffee bean roasting process, it peaks quite early and then begins to decline. As a result, light roast coffee beans surprisingly contain significantly more acrylamide than dark roast beans. This is the case despite the longer roasting time. (4)

A significant negative correlation was observed between acrylamide levels and the intensity of colour in roasted coffee …. (5)

Coffee is recognized by scientists as a principal dietary source of acrylamide where, in many countries, it is consumed daily and in significant amounts. (5)  In those cases, it is best to choose dark roasts to reduce acrylamide exposure.

If you only consume it once in awhile, the occasional light roast is likely not a big deal if that is what you genuinely prefer.

If you enjoy both, choose the dark roast!

The biggest health benefit of coffee is arguably due to the high levels of antioxidants.

But which has more antioxidants, light or dark roast?

Scientists have examined this very question and the answer is once again surprising. Dark roast is better than light roast!

While it seems logical that light roast coffee beans would have more antioxidants since they aren’t roasted for as long, this did not prove to be the case in the research.

According to research published by the Journal of Agricultural and Food Chemistry, dark roast coffee may be easier on your stomach. This is due to a the chemical N-methylpyridinium, which is produced during the roasting process. The longer the coffee beans are roasted, the more N-methylpyridinium they contain. (7)

N-methylpyridinium appears to prevent stomach cells from acid overproduction. Thus, if you tend to experience stomach irritation or acid reflux from drinking coffee, a darker roast is likely the better choice.

So Which is Better? Blonde or Dark Roast Coffee?

In sum, while the caffeine content of various roasts is not significantly different, dark roasts do seem to be the better choice overall.

Dark roast coffee and espressos win the day by offering much less acrylamide per serving along with a heftier dose of antioxidants. Combine these two pluses with less risk for stomach irritation and you have a dark roast slam dunk.

Many thanks to Jessica of Jet City Espresso Cafe in Seminole Heights, Florida for sharing with me her decades worth of knowledge on this subject! If you want a good espresso that is organic and fairtrade, check out this locally owned business!

(2) Which has more caffeine: dark or light roast coffee?

(4) Acrylamide in Coffee: Should You Be Concerned?

(5) Studies of acrylamide level in coffee and coffee substitutes