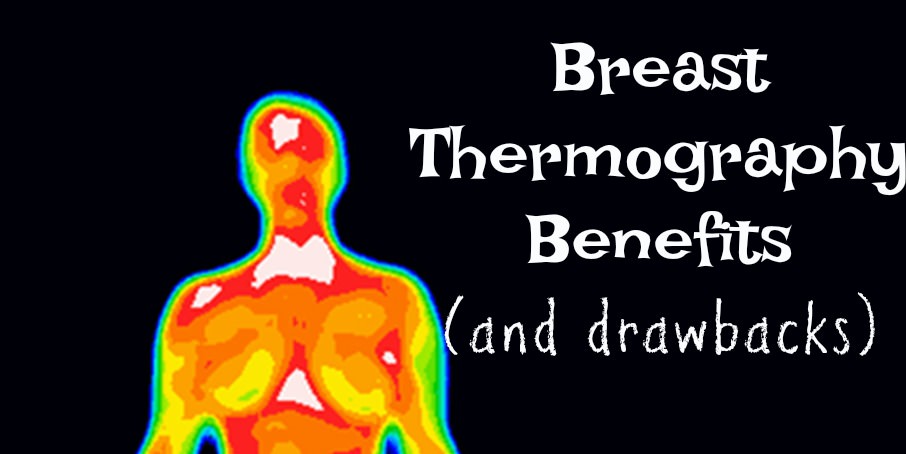 Thermography is gaining ground as a valid alternative to mammograms given that more women are seeking non-radiation alternatives for identification of breast anomalies amid a very x-ray happy medical community that seems unconcerned with long term exposure risk. But, are the benefits of thermography for real?

I myself have never had a mammogram. I’ve followed in the footsteps of my wise 86 year old mother who once said, “Why look for breast cancer with a test that can actually cause breast cancer?”

If only our conventional medical community made decisions using this much common sense!

By some estimates, up to 20% of all breast cancers diagnosed in the United States annually are actually caused by the cumulative radiation effects of mammograms. This data point makes the recommendation for annual or semi-annual mammograms after age 40 absolutely ludicrous!

If you don’t have breast cancer when you start screening with mammograms, you probably will years later after all that cumulative ionizing radiation exposure!

Another major problem with mammograms is the compression factor. This sometimes painful aspect of mammograms risks the spread of any breast cancer that may be present. This from Dr. Samuel Epstein MD, one of the world’s top cancer experts:

As early as 1928, physicians were warned to handle “cancerous breasts with care– for fear of accidentally disseminating cells” and spreading cancer. Nevertheless, mammography entails tight and often painful compression of the breast, particularly in premenopausal women. This may lead to distant and lethal spread of malignant cells by rupturing small blood vessels in or around small, as yet undetected breast cancers. (1)

So, what to do if you need to safely screen for breast cancer?

Thermography, or Medical Infrared Imaging, has been heralded by many in the alternative health community as a safe option to mammograms. Indeed, thermography is a very safe and effective breast screening technology. It very accurately identifies the vascular changes associated with breast cancer well in advance of when a mammogram would identify a problem. (2)

In addition, thermography is a much better choice than mammograms in these instances:

In these situations, there is much difficulty in reading mammograms accurately. When using thermography, however, breast differences do not cause any interpretation difficulties.

Here’s what Christiane Northrup MD, a fan of thermography, has to say:

“The most promising aspect of thermography is its ability to spot anomalies years before mammography.”

“Today, women are encouraged to get a mammogram, so they can find their breast cancer as early as possible. With thermography as your regular screening tool, it’s likely that you would have the opportunity to make adjustments to your diet, beliefs, and lifestyle to transform your cells before they became cancerous. Talk about true prevention.” (3)

Before you run to the phone and schedule your thermogram, however, there are a few more things you need to know.

Time for the reality check.

Thermography Pitfalls You Need to Know About

While thermography is definitely a helpful and nontoxic approach to detecting breast cancer at any stage, it is not the perfect alternative to mammograms as it is frequently portrayed.

First of all, thermography is rarely covered by medical insurance.  As a result, the typical fee of several hundred dollars for the initial screen with a required followup screen costing an additional one or two hundred dollars within 3-6 months is completely out of pocket for the vast majority of patients. A single thermogram each year after the initial 2 screenings is recommended – another expense.  For many women, this large personal expense is simply out of the question especially in the current economic environment.

Even in my home state of Florida where the law stipulates that all medical insurance providers provide policyholders with a free mammogram every 2 years for women aged 40-50 and an annual mammogram for women over 50 with no deductible or co-pay required, women still must pay out of pocket as no substitution of a thermogram for a mammogram is permitted.

Thermogram? You Might Be Forced to Have a Mammogram Anyway

A second very real problem with going the thermography route is that you frequently get forced into getting a mammogram anyway. All that money out of pocket and you still end up getting doused with radiation!

The reason is that thermography detects any breast anomalies not just cancer. An example is a benign cyst. So, women frequently end up at the gynecologist after having a thermogram which identified anything that looked remotely suspicious. This could be something as simple and common as a clogged milk duct.

Once at the gynecologist, women are shocked to learn that a mammogram is almost always required. Substituting a simple breast ultrasound as the first line diagnosis test to examine the anomaly is not allowed. You have to get a mammogram first even though mammograms are far less effective at identifying breast cancer!

It’s such a racket – I call it the Mammogram Mafia. Those mammograms are such a nice residual moneymaker for (some) GYNs. The situation is much like the kickbacks doctors receive for prescribing certain drugs. You didn’t actually think they would let you bypass it so easily did you?

A large out of pocket expense for a thermogram only to end up forced to have a mammogram is a source of extreme frustration for women trying to avoid mammograms in the first place.

Are Thermograms Helpful At All?

Given these very real pitfalls, does it make sense for women to use thermography at all?  In my opinion, yes, thermograms are an extremely beneficial test.

However, a woman needs to go down that road with her eyes completely open knowing that her battle to forgo mammograms is not necessarily over!

Be sure to have a discussion with your chosen thermographer before the appointment. This will ensure that he/she has a way for you to get only a breast ultrasound and not a mammogram if a suspicious area is detected.

In my local area, there are thermographers that can provide this service, and others that cannot. Be sure to ask!

Here’s what happened to me.  I got a routine thermogram which discovered a suspicious area which turned out to only be a clogged milk duct (my daughter was weaning at that time) but since we didn’t know what it was when the thermography was done, I was referred for a simple breast ultrasound.

I then discovered to my dismay that no one in town would give me just a breast ultrasound. Unless of course, I had a mammogram first!

Fortunately, coming from a medical family, I was able to circumvent the mammogram madness. I obtained a script for a breast ultrasound with no mammogram. Even then, the battle wasn’t yet over! When I went in for my breast ultrasound, I was read the riot act about forgoing the mammogram by the attending physician. This, after she admitted that a mammogram was not even an appropriate test for me as I have dense breast tissue!

She also denied that each mammogram (4 films per breast) exposes a woman to approximately 1 rad (radiation absorbed dose) of exposure. This is about 1000 times more than a chest x-ray. Amazing that she so vehemently denied this fact even though this information is clearly documented by the Institute of Medicine (4).

These people are so brainwashed! It’s really sad and downright dangerous for those who don’t research for themselves. Clueless, misinformed docs. They are everywhere my friends!

In summary, thermography is a fantastic diagnostic tool that is clearly superior to mammograms. But, be sure to have your ducks in a row about what you will do if anything suspicious is found before you pay all that money out of pocket!

The Dangers of Estrogenic Foods, Herbs, and Supplements to Breast Health

What Your Doctor Doesn’t Know About Diabetes and Statins