The Healthy Home Economist / Healthy Living / Is Your Egg Allergy a Soy Allergy in Disguise? 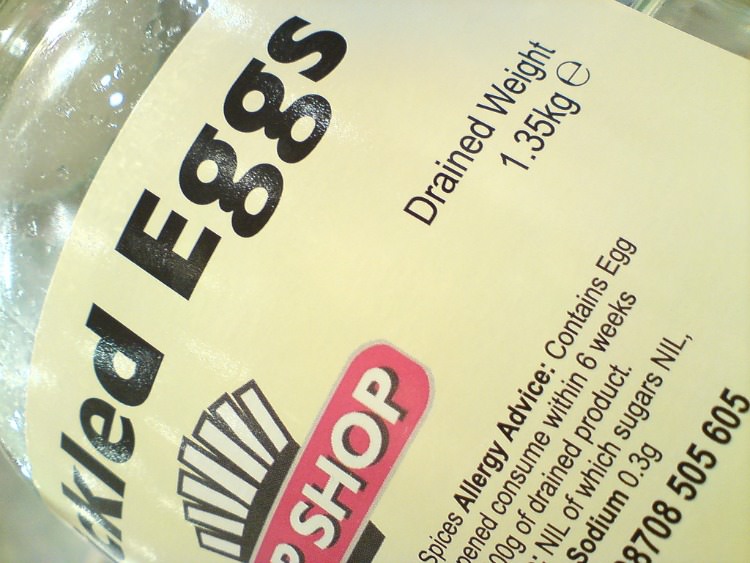 The incidence of pediatric food allergies, sometimes life-threatening, is rapidly on the rise. Since 1993, the number of children with food allergies, particularly to the “Big-8” increased over 18 percent. These foods are eggs, wheat, milk, tree nuts, peanuts, fish, shellfish, and soy. What’s more, the number of those seeking treatment for a food allergy-related condition at a hospital emergency room tripled!

These official numbers seem too low when observing the prevalence of food allergies in everyday situations.

In my daughter’s preschool class, for example, only she and one other child had no food allergies at all in a class of twelve! This means that over 80% of the class suffered from at least one food allergy serious enough to require the teacher to maintain a list to refer to during snacks and mealtimes.  In school lunchrooms, the discussion regularly touches on who is allergic to what foods with children sometimes challenged as untruthful if they insist they have no allergies at all.

Food allergies have become the norm rather than the exception for the Millennial Generation.

Egg allergies are one of the most difficult for parents to handle as this eliminates not only eggs but any product containing them.  This is tragic as eggs are Nature’s perfect food with important building blocks for a child’s growing body including choline, B12, arachidonic acid, and other critical brain-building fats.

Soft boiled egg yolk whether from chicken or duck eggs is the perfect first food for baby for this reason. Goose egg yolks are also an excellent option, though they are less commercially available.

Health Canada recommends it over cereal grains for this purpose due to the abundant anthropological evidence of its use by Aboriginal cultures.

Not only nutrient-dense, but eggs are also the most inexpensive form of complete protein and are typically one of the easiest nutrient-rich foods to obtain locally.  Eggs made up the bulk of my diet during graduate school as they were one of the few whole, unprocessed foods I could afford while living on a meager budget of $400/month.

What to do with an egg allergy?

The first thing to do is realize that your egg allergy may, in fact, be a soy allergy in disguise!

This conundrum can occur because the chicken feed used by both conventional and organic egg farms is loaded with soy.

Why soy and not some other form of protein? Well, soy is cheap for one and helps the chickens grow and mature faster for another. Soy helps keep eggs cheap and that’s why it is favored as a common ingredient in chicken feed.

Soy Fed to Chickens Ends Up in Their Eggs

According to Dr. Kaayla Daniel in her article Second-hand Soy from Animal Feeds, four studies to date indicate soy phytoestrogens, known as isoflavones, end up in the egg yolks of chickens fed soy-based feed with one study showing that they end up in the chicken liver, heart, kidney, and muscle meat too.

In the first study, researchers from the Food Research and Development Laboratories in Shizuoka, Japan fed laying hens a diet with a high concentration of soy phytoestrogens (isoflavones) and followed up by measuring isoflavone levels in their blood and egg yolks. Over a span of 18 days, the isoflavones peaked at 65.29 mcg/100 grams on day 12 and remained at this level for the remainder of the experiment.

A few years later, scientists published follow-up research to the study above, reporting that they had found the most active form of soy isoflavones known as equol in the egg yolk of soy feed eating chickens.

Research out of the University of Maryland and reported in the Journal of Agriculture and Food Chemistry found that eggs from quail fed with feed containing the soy isoflavone genistein had this substance in the egg yolk but not the egg white.

Finally, in 2009, an Ohio State University grad student completed his master’s thesis on the Quantification of Soy Isoflavones in Commercial Eggs and their Transfer from Poultry Feed into Eggs and Tissue.  His experiments involved 48 laying hens that were divided into groups and fed either soy-free feed, a regular feed containing 25 percent soybean meal or a special, high soy feed with 500 extra isoflavones per 100 grams. The experiments proved the rapid accumulation of soy isoflavones from chicken feed into eggs and tissues, with the chickens fed the high soy diet laying eggs that contained yolks with a whopping 1000 mcg of isoflavones per 100 grams!

The Good News if You Have a Soy Allergy

The eggs from chickens fed soy-based feed do indeed pose a threat to those with a soy allergy. It may also confusingly present as an egg allergy. However, there is some very good news to share.

Within 10 days of switching to a soy-free chicken feed, no trace of isoflavones remained in the eggs. This is the case even if the hens had grown up and fully matured eating soy-based feed!

Thus, if you think you are allergic to eggs, simply switching to soy-free eggs may solve the problem!

Whatever you do, don’t throw up your hands and turn to the common egg replacer called aquafaba chickpea water. This anti-nutrient laced pseudo-food is dangerous to health and contributes to leaky gut and the development of autoimmune disease.

As you search for soy-free eggs, know that all commercial and even organic eggs use soy-based chicken feed! In the 2009 study from Ohio State University grad student Vargas Galdos described above, eighteen brands of eggs were examined. Every single one whether commercial or organic, free-range or caged, contained soy isoflavones.  While variations from egg to egg were observed, the total isoflavone content per egg consistently ranged from 33mcg to 139mcg per 100g of egg yolk.

Eggs labeled as high omega-3 eggs were the only exception. These specialty eggs showed significantly lower soy isoflavone content. Why? Most likely because flaxseed or other omega-3 fatty acid source replaced some of the soy in the chicken feed.

What to do then?

The answer is to find a farmer that offers soy-free eggs. Alternatively, raise a few hens in your backyard and feed them soy-free feed.

If being a backyard farmer isn’t possible, take heart because soy-free eggs are increasingly becoming available from local farmers. They are in high demand by those with a soy allergy and other customers trying to avoid soy isoflavones for health reasons.

How Soy-Free Eggs are Made 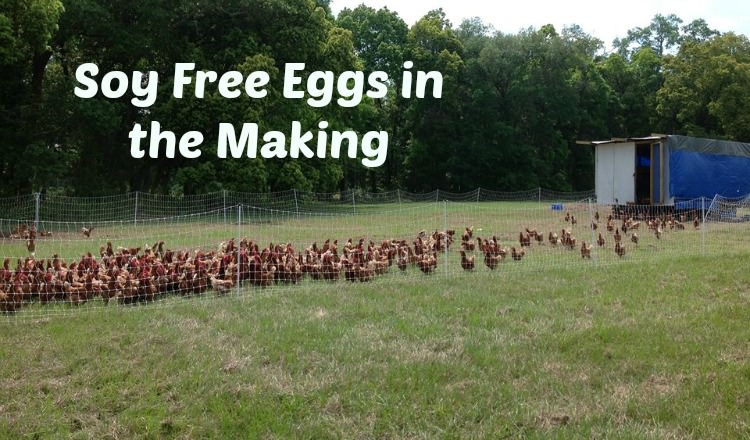 My friends Nathan and Christy Freeman, owners of Restoration Ridge Farm in Dade City, Florida offer soy-free, organic eggs to their customers and are getting rave reviews.  The following email is from a customer who realized her daughter’s egg allergy was really a soy allergy in disguise after trying soy-free eggs for the first time:

Just have to say how much we love your farm fresh, soy free eggs!

Our daughter has a facial skin condition which has been linked to soy intolerance and discovered that this condition also appeared when she consumed eggs.  Since most chicken feed seems to be soy-based, she had all but given up on the idea of having eggs in her diet again (both for baking and in cooking) because of this adverse reaction but after trying the eggs produced by your chickens, she has had absolutely no skin reaction at all !!  Best part…they are delicious too!

Is an allergy to eggs been your stumbling block to eating them in the past? If so, perhaps it’s time to give soy-free eggs a shot and see if you can enjoy Nature’s perfect food without symptoms.

170 Scientific Reasons to Lose the Soy in Your Diet
Baby First Foods
Why Soy Formula, Even Organic, is So Dangerous for Babies
Egg Beaters: Food for Fools
Why Organic Store Eggs are a Scam
Estrogenic Foods Like Soy Trigger Precancerous Breasts
Is Soy Lecithin Really So Unhealthy?