Healthy Home Economist / Archives / Whole Grains and Cereals / What is Triticale? Should You Be Eating It? 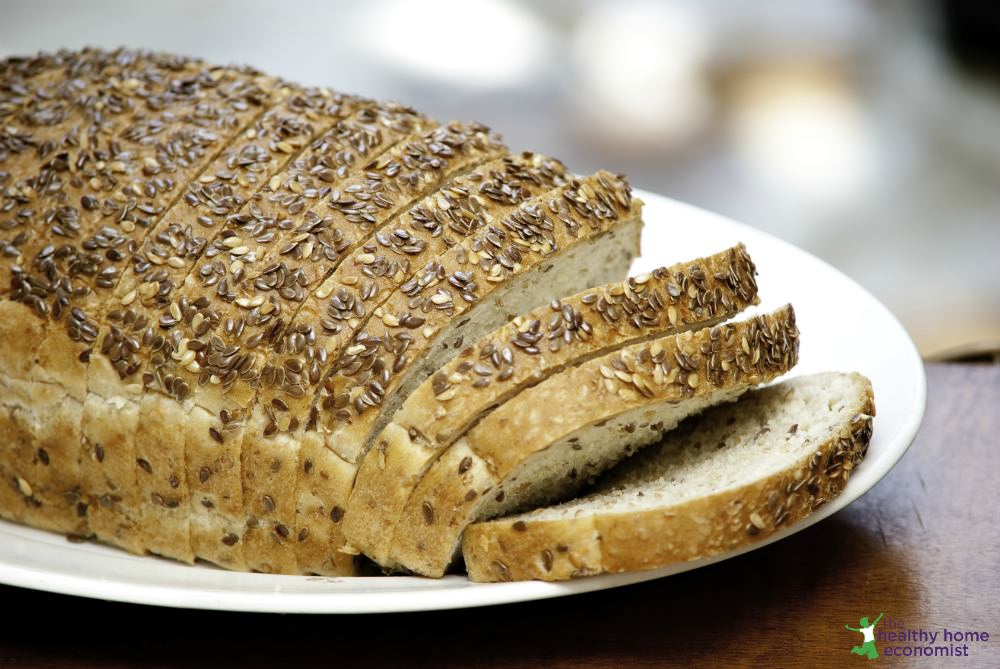 Wheat. One of the world’s oldest and most grown and consumed staple until recently. Not only does wheat come in many shapes and sizes, including older relatives like spelt, einkorn, and Kamut, it also comes in many modern cultivars and crosses – hard red, soft white, and a curious grain called triticale.

Triticale is an interesting member of the cereal grain family. Frequently misspelled as triticale, it is a cross between wheat (Latin triticum) and rye (Latin secale). Put them together and you get triti +cale = triticale!

The cross is done by using male wheat and female rye. Both are gluten-containing grains, though decidedly lower in this plant protein than radiation mutated modern wheat.

Why Cross Wheat and Rye?

The reasons for creating a wheat/rye hybrid are similar to why humans hybridize other plants. Hybrids tend to increase hardiness and/or improve yield.

Wheat has a number of drawbacks, such as poor disease resistance and preference for very particular soils. Rye does well in more varied soils and conditions and has excellent disease resistance. Yet, rye’s yields are far lower than wheat, so plant breeders considered the two grains to be a perfect match.

As we will see below, grains from certain plant families – especially rye, wheat, and barley – are closely related. Thus, they have swapped genetic info for generations to create many of the traditional grains we appreciate today!

What is Triticale Used For?

Triticale isn’t generally grown or used as a commercial crop for food production. Rather, it serves as a fodder crop for numerous animal species around the world. Feeding experiments in animals indicate that it is more digestible, which has increased its popularity.

Only recently did people start using it and considering it as a possible staple crop. Since many cultures around the world depend on cereal grains as a main source of calories, it may one day prove to be an important crop to feed large population groups.

You may have come across it in health food stores or on limited food labels. It is typically sold as rolled triticale for porridge making. Alternatively, the berries come in bags like any other grain for sprouting or grinding into flour to make bread, rolls, and other baked goods.

As a kid, I vividly remember my grandmother eating rye toast – the smell, texture, taste, and especially the sight were shocking to a child who grew up eating white bread with the crusts cut off! Was she eating dirt? Or mixing dirt into her bread???

But Grandma was on to something. Rye is more nutritious than wheat. Some studies point to health benefits specific to rye that wheat doesn’t offer. A single serving of rye contains many nutrients. A few notables include:

Why is wheat so much less nutritious than rye?

The problem stems primarily from the fact that wheat suffers from the huge problem of overbreeding. This situation has led to dramatic reductions in its nutrition profile, while modern cultivation techniques leave much to be desired. So, fixing wheat from both an agricultural and nutritional perspective seems like a step in the right direction, right?

Triticale has significantly less gluten than wheat. This includes heirloom wheat and the completely unhybridized einkorn.

In addition, it contains more of the essential amino acid lysine. Since it is primarily grown as animal fodder, the higher lysine content is especially beneficial.

Note that fodder differs from feed in farming terms. Fodder is made from plants grown for animals to eat green, whereas feed usually refers to grain or similar dry, harvested materials for animal consumption.

Lysine plays a limiting role in the growth of many animal species, and thus many feeds must add additional lysine to balance the ratio.

Triticale appears to have some of the benefits of both wheat and rye blended together. It has far more protein than rye flour, far more folate than rye or wheat, and significantly more manganese than either. (1)

Because all these grains come in many varieties, if you look up data on them, realize it will be all over the map! The notable nutrients in a serving of triticale include the following: (2)

Notice that many are still quite a bit lower than rye

Many healthy heritage grains enjoyed today have hybrid roots. spelt, Kamut, emmer, white Sonora, and red fife are some of the best known.

Did the cultivation of triticale come about in a similar way over the millennia? Here is a good summary from the Weston Price Foundation about the origins of heritage wheat.

Among the early grasses that produced nourishing food for people is the species of Triticum. Within this species, the einkorn, emmer and spelt groups all had a common ancestor about 10,000 years ago. Wild and cultivated einkorn are classified as diploid by plant geneticists; that is, their DNA contains two sets of chromosomes…A variant of wild einkorn probably mixed with another diploid wild grass, T. speltoides to produce a tetraploid cereal, T. dicoccoides, called wild emmer, with 4 sets of chromosomes.

With more inherited characteristics, cultivated emmer wheat eventually pushed out einkorn in popularity as it could thrive in more environments and under wider, warmer, climate variations….Cereal geneticists have two theories for the sites of the emergence of spelt, a hexaploid wheat variant with 6 sets of chromosomes, but they agree that either wild or cultivated emmer must have moved into a geographical area where T. tauschii (goatgrass) was an indigenous species (southern Russia, western Iran and northern Iraq).

Just as emmer wheat benefitted (sic) by the addition of genetic material in its adaptive advantage over einkorn, spelt (T. spelta) exhibited even more adaptability from the contribution of the characteristics of its wild grass parent. The spelt group of wheats are all hexaploid, although it is interesting to note that there are no known wild hexaploid forms of Triticum.

It seems that the wheat family easily and naturally picks up and trades genetic info with other related plants and species. However, this isn’t how we got triticale.

The early attempts in the late 1800s at crossing wheat and rye had a BIG problem – all the seeds were sterile. (3)

Undeterred, scientists started to try different approaches to forcing their genetic intermixing during the inappropriately named “Green Revolution” of the 1960s.

To improve the chances of fertile seeds, culture techniques developed using the chemical agent colchicine. This worked to double the chromosomes.

The result? Most commercial triticale is hexaploids, similar to spelt. But, and this point is key  – the use of colchicine to create fertile triticale seeds means that the process never would have happened naturally.

Colchicine is a naturally occurring chemical derived from the colchicum family, a genus of about 160 species of flowering perennial plants. It is sometimes used to treat gout and a few similar, painful medical conditions. It is also incredibly toxic. The United States classifies colchicine as an extremely hazardous substance!

Now, none of this chemical ends up in the final triticale seeds. It is used only in the lab to mess with the reproduction of the wheat and rye in order to create new strains that otherwise would never have existed.

I am personally more than a little leery of anything that can only come into existence via the use of highly toxic chemicals and other similar, unnatural processes!

Unlike wheat and rye, there isn’t much research on triticale. Human studies to date primarily focus on the protein content, which is retained at a high rate. Animal studies indicate a high degree of digestibility. (3)

It is hard to know if the benefits of wheat or rye, especially rye, carry over into its hybridized offspring. Genetics are funny like that.

Numerous studies show benefits for rye, such as prevention of gallstones, reduction of type II diabetes risk, and more. (4)

But that doesn’t mean triticale will have the same benefits. It could have similar, less, or even greater ones, but we won’t know until the research is in.

The important thing to remember about triticale is that it is a man-made cereal grain. It is not a product of Mother Nature. Nor did not come about via nontoxic, human-assisted hybridization in a traditional agricultural setting.

Triticale is a product of chemicalizing the plant reproductive process. While not considered a genetically engineered crop, triticale is certainly a precursor to the GMO crops of today.

Organic triticale berries are available online and in some specialty stores, but one has to wonder if this label has much meaning given this cereal grain’s history.

Given that the seeds themselves were spawned from forced hybridization with a toxic chemical, how can growing it organically mean much from that starting point?

As mentioned before, the chemicals used to hybridize triticale aren’t in the seeds themselves, but it does seem more than a bit absurd to grow such a crop organically in the first place.

If you are undeterred by the dubious history of triticale and wish to eat it in your home, you can substitute triticale for wheat and many other common bread grains. Just be ready to adjust your recipe, as grain swapping typically requires altering the proportions.

Quality evaluations of triticale grain for milling and baking show that it is inferior to bread-making with wheat and to durum wheat for pasta but generally considered superior to rye. (4)

Since it is higher in protein than wheat or rye, some prefer it for bread baking. Others use it as a rice substitute. Triticale porridge made by soaking the rolled berries overnight and cooking them up much like overnight oats is also a common method of consumption.

Have you tried triticale? How do you feel about this approach to genetically modifying foods using toxic chemicals to tamper with their reproduction?