Sourdough Starter Differences from Around the World

Comparison of the microbial diversity of 500 sourdough starter cultures from around the world and 4 different continents yield surprising results. 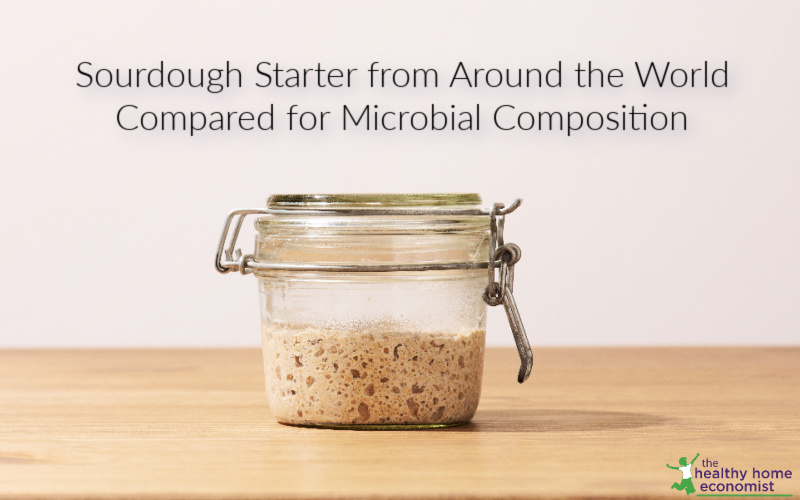 I have long suspected that the digestibility of authentically made sourdough bread likely varies depending on how the starter is made among other factors. This is one reason why making your own sourdough starter from scratch can result in dramatically different results in aroma, taste, and texture.

Now, an observational study of 500 sourdough starters from four different continents has shed light on the extent of microbial diversity in this ancestral fermented food across diverse cultural and geographic backgrounds.

Homemade sourdough bread is an ancient and historically important practice that experienced a cultural resurgence during the COVID-19 pandemic.

The actions of beneficial sourdough bacteria and yeasts including the production of organic acids and extracellular enzymes also impact bread flavor, texture, and shelf life.

To determine if this was true, researchers analyzed 500 samples of sourdough starter, primarily from home bakers across four continents. The starters were submitted for study from the United States, Europe, Australia, New Zealand, and Thailand. (1, 3)

The researchers immediately noticed that location mattered little to the microbial diversity of sourdough starter.

Elizabeth Landis, co-lead author of the study and a PhD student at Tufts University said:

This is the first map of what the microbial diversity of sourdoughs looks like at this scale, spanning multiple continents. And we found that where the baker lives was not an important factor in the microbiology of sourdough starters. (2)

In fact, the study challenged much of the conventional wisdom about sourdough! There is no one factor that is responsible for most of the variation.

What researchers found instead is that numerous variables have a small effect, which compounds into big differences overall. Examples include how old the sourdough starter is, how often it’s fed, and where people store it in their homes.

Age of the Starter

Sourdough bakers can either begin their starters from scratch using fresh flour and water or purchase an established starter from a business or individual.

Researchers found that lactic acid bacteria species tended to vary based on the age of the culture.

For example, Lactobacillus brevis was associated with newly made starter. However, commercially obtained starter contained Lactobacillus sanfranciscensis in abundance.

Nearly one-third of the sourdough starters examined contained acetic acid bacteria. These microbes are what give kombucha and vinegar their characteristically tangy flavor.

This finding is surprising as previous studies on sourdough have almost exclusively focused on yeasts and lactic acid bacteria.

The presence of acetic acid bacteria in sourdough starter strongly affected the aroma and taste of the bread. It also slows the rise of the loaf in the oven during baking.

Over 70 Different Types of Beneficial Yeasts

The average sourdough starter contained only one species of yeast. Most commonly, this was Saccharomyces cerevisiae, or baker’s yeast.

Overall, however, 70 different types of beneficial yeasts across all 500 sourdough samples were identified.

It would be interesting to know if the commercially produced starters tended to contain only the baker’s yeast strain. My hunch is that de novo starters made in the open air of a home environment would tend to have much more variety!

Ultimately, it seems that studying the complexity of sourdough microbiomes from around the world may prove to be an excellent model for understanding the interactions between microbes in general.

While the role that microbial species and their synergistic interactions play in shaping sourdough characteristics is important, perhaps its biggest contribution may be helping us to better understand more complex ecosystems. This would include the cooperation and competition between microbes that occur in the human gut that dramatically affects health and speed of aging…for better or for worse.

(1) The Diversity and Function of Sourdough Starter Microbiomes