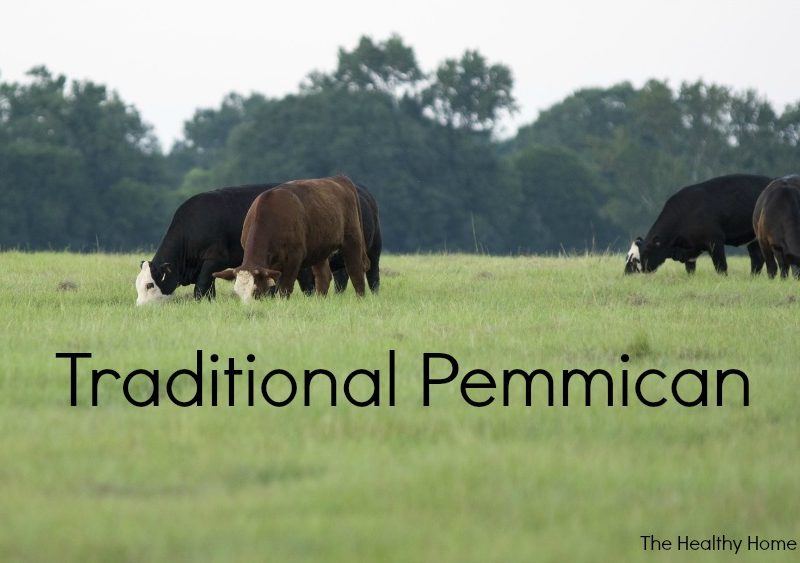 Imagine it is five hundred years ago and you find yourself traveling across the northern plains during the winter. Temperatures are well below freezing. The wind is strong. Water is scarce, food even scarcer. What would you eat? Where would you find it? Would it be nourishing enough to sustain you? Native Americans understood and had an answer to this problem, and the answer was pemmican.

Pemmican is the ultimate survival food. As it turns out, it is delicious and healthful for modern-day eating as well.

Thoroughly dried lean meat forms the basis for this traditional food, which is then ground into a powder or chopped into small, fine pieces. It appears the meat used in pemmican was originally not powdered, but instead pounded down to fibers. This seems to result in a more shelf-stable and digestible product. However, for practical reasons, the powder does just fine for average long term storage (a few years or more depending on the amount of salt and storage conditions).

Beef or bison are the favorite types of meat for modern versions. However, Native Americans made traditional pemmican from a range of lean cuts of bison, elk, moose, and deer and perhaps on occasion, even bear.

The meat is then mixed with traditionally rendered tallow. The addition of a nourishing fat was considered so essential, that the name pemmican is actually derived from the Cree word pimi, which means fat or grease.

Once blended in the appropriate protein/fat ratio, pemmican looks a bit like duck or chicken pate. It can be consumed in this form or shaped into cubes or sausage-like strips for grab and go convenience.

Pemmican is often confused with jerky, but they are actually quite different foods both texturally and nutritionally speaking.

Jerky is made with just the lean muscle meat, dried in thin chunks. Sometimes jerky is tenderized before drying.

Before the drying process, it is usually marinated in a mixture of herbs and spices to impart flavor. Drying is achieved either by sun, smoke or mechanical dehydration. If the marinade does not include any sugar, jerky ends up being pure protein as a final product.

Pemmican, however, contains fat too which is what allows this unique provision to be considered a complete food. One cannot live on jerky alone, but a person can subsist for weeks without any loss of health on pemmican! More on this below.

How Nourishing is Traditional Pemmican?

Anthropologist and explorer Vihljamur Stefansson observed that the Inuit would spend weeks away from camp with nothing more than pemmican to eat and snow to drink. Despite this extremely limited diet, they would return in sterling condition.

While living with the native peoples, Stefansson himself adopted a pemmican habit enjoying the same health-preserving results. European settlers quickly embraced the practice as well, trading with the Native Americans to obtain this valuable, lightweight, and nutrient-dense food while learning to make it themselves.

So important was pemmican for survival that at one point it was the cause for war. In 1814, governor Miles Macdonell started the Pemmican War with the Métis when he passed the short-lived Pemmican Proclamation. This edict forbade the export of pemmican from the Red River Colony.

Without pemmican, many early feats of exploration would have been impossible until much later. Robert Peary had this to say about his famous expeditions to the North Pole, where pemmican played a crucial role in the nourishment of both man and dog:

Too much cannot be said of the importance of pemmican to a polar expedition. It is an absolute sine qua non. Without it a sledge-party cannot compact its supplies within a limit of weight to make a serious polar journey successful.

A Pemmican Variety for Every Occasion!

Variants of pemmican abound, with the Native Americans even reserving special ceremonial and wedding recipes for this traditional food.

Sometimes, in addition to the meat and fat, enthusiasts add in other foods as well. Common choices include dried and crushed berries, nuts and even honey.

Modern folk have an almost limitless array of items to add to their pemmican. Native Americans could have only dreamed of such a variety! If you plan to consume your pemmican sooner rather than later, such additions are not a problem. If your primary purpose for making pemmican is long term, storage, however, the more additional items you add, the less shelf-stable your final product may be.

Properly made pemmican made with just meat and fat if stored properly lasts many years, even decades. Native Americans made special leather sacks packed with pemmican and sometimes stored these in special places along commonly traveled routes. So, if you are looking for affordable nutrient-dense storage foods, pemmican may be the solution you are looking for!

While pemmican often comes in the shape and size of a standard store-bought snack bar (like a CLIFF or Lara bar), it has a very different taste and texture. Ultimately, the type of meat and fat used strongly determines both of these characteristics.

For me, I liken pemmican to the Elven Lembas Bread from the Lord of the Rings trilogy. The more you eat pemmican, the better it tastes and the more nourishing it becomes.

The best and most nutritious pemmican starts with a lean cut of grassfed or wild animal, such as a shoulder roast.

Since the meat will be dehydrated, you will need to start with 4-5 pounds of lean meat to finish with about 1 pound of pemmican. To get some idea of how dense pemmican is, a taureau or bag weighing about 90 lb/41 kg required an entire buffalo! Keep in mind that the average buffalo weighs 1400 lbs/635 kg! 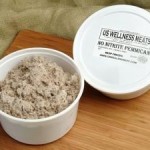 Traditional recipe for making pemmican, humankind's first Power Bar courtesy of the Native Americans who perfected the method many centuries ago.

Use no more than 2 cups total of optional ingredients.

Remember, the more extras (nuts, seeds, or berries) you add, the less shelf stable the pemmican becomes. It also becomes less pemmican and more snack bar. Modern types of pemmican with additional ingredients beyond just the meat and fat are best kept in the freezer for this reason. If you wish your pemmican to be shelf stable and last for years, go with meat and fat only.

Once finished, the mixture can be made into bars, slabs or balls for storage. It is good to label your storage bag or container with the date the pemmican was made, and some people will also record each batch’s ingredients for future reference and improvements. The picture below shows pemmican in small, cigar-shaped bars. 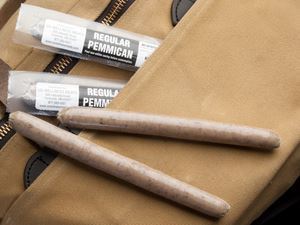 It is best to store pemmican in a cool, dark, and most importantly DRY place, inside an airtight container or a container that will not attract moisture.

If you have the ability to vacuum pack it, even better!

More people wish to enjoy pemmican than actually wish to make it. If this is you, fortunately, there are a number of companies and farms that now offer it.

My recommendation for a trusted pemmican source if you wish to ship it to your door is US Wellness Meats.

If you choose another pemmican manufacturer, be very careful. Many businesses are cashing in on catchy food buzzwords and selling food called pemmican that is anything but traditional!

Check out this scammy “Pemmican” protein bar from Bear Valley.

Notice anything missing from this pemmican bar? Yep, you got it! There is no meat and no nutrient-dense animal fat. How do companies get away with this?

The bottom line…if you choose to buy instead of make pemmican, be very sure about your supplier!

Stock vs Broth – Are You Confused?

Mussels and Sausage in White Wine, Garlic and Parsley