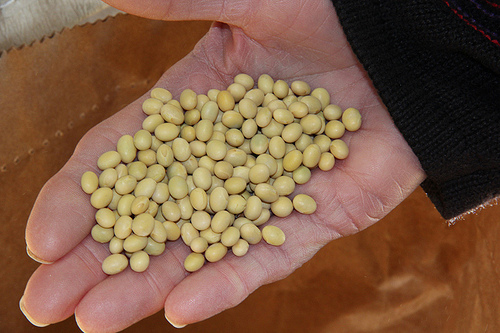 So you got the memo that soy unbalances hormones.

If you think that is the extent of the damage the lowly soybean can wreak on your health, you may be surprised to learn that soybeans are also notoriously hard to digest with GMO soybeans – widely used in processed foods –  the absolute worst.

The best known and most important of the protease inhibitors is trypsin. GMO soybeans including edamame have more of them than organic or conventional beans, and to make matters worse, those protease inhibitors are stubbornly resistant to deactivation by cooking or other processing methods.

Soybeans are not the only foods that contain protease inhibitors. All beans contain them, as do grains, nuts, seeds, vegetables of the nightshade family, egg whites, and other foods. However, the protease inhibitors in those foods rarely contribute to health problems because few of those foods are eaten excessively and cooking deactivates most of them.

In contrast, there are more protease inhibitors in soybeans than in any other commonly eaten food. While protease inhibitors are not a problem for people who enjoy the occasional soy dish, the quantities add up quickly when people consume soy foods or drink soy milk daily in the mistaken belief that it is a “healthy” meat and dairy substitute.

For decades, USDA and other researchers put their efforts into finding safe and inexpensive ways to deactivate the protease inhibitors found in soy. Boiling, roasting and modern processing methods help, but cannot destroy all of these troublesome components. The only way to come close is through the old-fashioned fermentation methods used to make miso paste, tempeh and natto, the most nutritious form of soy. Modern industrial processing techniques involving heat, pressure and chemical treatments have been reported to kill off as much as 80 to 90 percent, but that’s a promise, not a guarantee.

Protease inhibitors are an especially bad problem in GMO soybeans. With more than ninety percent of commercial soybean crops now genetically modified — up from around fifty percent in 2007 — there are very real health risks. Monsanto, of course, claims these beans are substantially equivalent to the conventional soybean, hence safe.

In fact, tests have shown significantly higher concentrations of protease inhibitors in the toasted GMO soybean compared to conventional soybeans. Furthermore, those found in the GMO strain proved stubbornly resistant to deactivation by the heat treatment known as “toasting.”

When the results first came in, Monsanto took the bad news to mean that the GM beans had not been properly cooked and asked for retreatment of the sample. Further heating, however, widened the difference even more. The logical conclusion would be that a substantial difference exists between the GMO and conventional soybeans, and that the GMO soybean is more likely to cause digestive distress and growth problems in humans and animals.

Monsanto, however, concluded that the second toasting was still not enough and toasted twice more until they got the result they wanted, namely that ALL proteins were denatured and inactivated. At this point, most of the soybean’s protein value was also
destroyed, but it gave Monsanto the “proof” it needed to conclude that where protease inhibitors were concerned, GM and normal soybeans were equivalent.

Protease Inhibitors Do a Number on the Pancreas

Why be concerned about protease inhibitors? They are the reason soybeans are notoriously hard to digest, and why soybean consumption stresses the pancreas. Because the protease inhibitors in soy inhibit the protease enzyme we need to digest protein, the pancreas has to work overtime to produce more. If this happens only occasionally, the pancreas quickly recovers. But if soy is consumed day after day, week after week, year after year, there will be no rest for the weary pancreas. The result is an increase of both the number of pancreatic cells (hyperplasia) and the size of those cells (hypertrophy).

The extent of soy-caused pancreatic hypertrophy and hyperplasia varies widely from species to species in the animal kingdom. In some soy-fed animals, the pancreas swells quickly, in others more slowly, and in some not at all. However, all animals — including the human animal — will suffer from the loss of the ability to secrete sufficient enzymes if regularly consuming protease inhibitors. That means digestive distress for nearly everyone and growth problems for the young.

With pancreatic stress and cell proliferation, cancer becomes a distinct possibility. Pancreatic cancer currently ranks as the fourth leading cause of cancer deaths of men and women in the United States, and is predicted to move into second place by 2020. Back in the 1970s and 1980s, researchers studying damage to the pancreas caused by protease inhibitors noted that pancreatic cancer had then moved up to fifth place, and suggested a soybean-protease inhibitor connection. Since then the rise has been even more alarming.

The fact that it has occurred along with increased human consumption of soybeans — and over the past decade GMO soybeans — is probably not coincidental. Association, of course, does not prove cause and effect, but looking at the rise of pancreatic cancer alongside the evidence of so many animal studies is suggestive and sobering.

Irvin Liener, PhD, professor emeritus at the University of Minnesota and the world’s leading expert on anti-nutrients and toxins in plant foods, sums it up well, “Soybean trypsin inhibitors do in fact pose a potential risk to humans when soy protein is incorporated into the diet.”

For a full discussion and references, read Chapter 16: Protease Inhibitors, Tryping on Soy in The Whole Soy Story: The Dark Side of America’s Favorite Health Food

How to Freeze and Thaw Sourdough Bread