Yet Another Reason to Cook That Broccoli 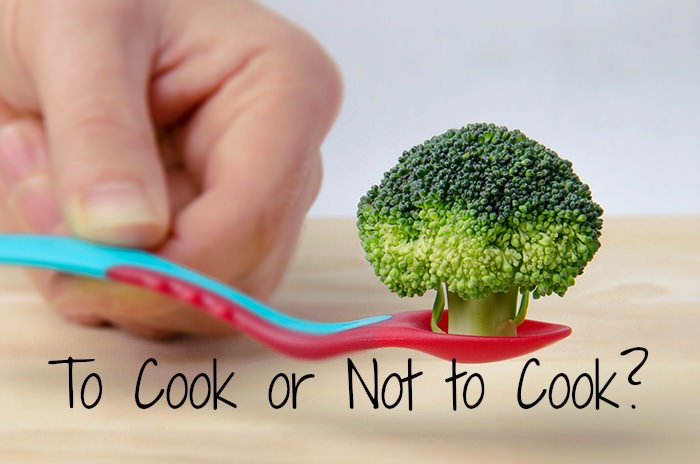 If I stop by the raw juice bar at my local health food store late in the day, I always request a thorough clean-out of the commercial-sized juicer before my favorite organic raw juice blend of carrots, celery, beets, cucumber, and half an apple is prepared.

This is because the juicing that has been occurring all day long prior to my arrival is typically very heavy on the raw cruciferous vegetables. These primarily include broccoli and kale from making green smoothies. Some people add a scoop of maca powder to the smoothie too, a less commonly known crucifer. In fact, so many people come in ordering green smoothie drinks containing raw broccoli that there is a huge bin of bare broccoli stalks sitting on the back counter!

The juicer clean-out assures that no leftover raw broccoli juice or pulp gets in my juice. If it does, I get a terrible stomach ache and usually a temporary bout of nausea.

The truth is, raw cruciferous veggies like broccoli, cauliflower, cabbage, and kale are not at all easy to digest for a lot of people even those with strong digestion. The reason is the high fiber content of this particular class of vegetables. This fiber, called cellulose, makes these vegetables hard to handle in raw form.

When a food is difficult to digest, this also makes it problematic for the body to fully extract the nutrition. This is why nutritional pioneer Dr. Weston A. Price always suggested lightly cooking vegetables in butter before consuming them and recommended the practice in a letter to his beloved nieces and nephews early in the last century.

The cooking serves to soften and break down the plant fiber, and the healthy fats in the butter improve nutrient absorption. Research out of Iowa State and Purdue University has confirmed the wisdom of Dr. Price’s recommendation, as the nutrition from vegetables, has indeed been found to be more readily absorbed in the presence of fat.  So much for the supposed wisdom of low-fat salad dressing!

Now, research is confirming the traditional wisdom of cooking your crucifers too.

While it is well known that eating cruciferous vegetables reduces the risk of cancers of the digestive tract, this protective effect was thought to be best obtained when these vegetables were consumed raw.

Sulfur-rich phytochemicals found in cruciferous veggies called glucosinolates have a strong anti-tumor effect but are only effective when they are converted to isothiocyanates (ITC).  It was previously thought that cruciferous veggies had to be eaten raw for this to take place.  This is because the glucosinolate-ITC conversion process requires the presence of the enzyme myrosinase which is destroyed during cooking.

Broccoli Benefits Not Diminished by Cooking

Now, an interesting study by The Fred Hutchinson Cancer Research Center has demonstrated that beneficial gut bacteria can do the work for us. Although the enzyme myrosinase is destroyed by heat, consumption of cooked cruciferous vegetables actually stimulates the appropriate beneficial microbes that are able to convert glucosinolates into ITC.

Once again, beneficial gut bacteria are found not only to protect our health and boost our immune system but also to nourish us at a most basic level

Another benefit of cooking cruciferous vegetables like broccoli is that it reduces the goitrogenic chemicals in these plants that block the production of thyroid hormone.  In the article The Dark Side of Crucifers: Goitrogens, Chris Masterjohn Ph.D. has this to say:

Most forms of cooking reduce but do not eliminate the goitrogenic effect. Microwaving cabbage reduces the goitrogen bioavailability to one-half; steaming broccoli reduces it to one-third; and boiling watercress reduces it to one-tenth. Boiling not only leaches goitrogens into the cooking water, but also brings the vegetable to a higher temperature, causing a greater thermal destruction of the goitrogens within it. Boiling cabbage for just five minutes results in a 35 percent loss of goitrogen activity; thereafter, each additional five minutes results in another five to ten percent loss. By thirty minutes of boiling, 87 percent of the goitrogens are eliminated.

Hence, anyone with a known or suspected thyroid issue should seriously consider cooking that broccoli and other cruciferous veggies or avoiding them temporarily until thyroid problems improve.

But What About Salads?

While an occasional arugula salad, a handful of broccoli florets or a cup of coleslaw is not going to do any harm to most folks, it would be wise to exercise caution and not make a habit of consuming large amounts of raw cruciferous vegetables especially in the presence of thyroid issues.

Another consideration is for those suffering from acid reflux. A very small amount of raw cabbage a few minutes before a meal can be extremely helpful in reducing reflux issues as suggested by Dr. Natasha Campbell-McBride MD. Cabbage stimulates hydrochloric acid (HCL) production to permit digestion to proceed normally without the creation of a secondary wave of acid from the putrefying contents of the stomach erupting back into the throat. My husband actually uses this home remedy with amazing success particularly when we are traveling and the quality of the food is not as good as what we eat at home.

Of course, if you wish to preserve all the enzymes and still break down the cellulose in cruciferous vegetables without cooking, you can try your hand at fermenting them.  Traditionally made sauerkraut, for example, not only breaks down and softens the cellulose but also adds additional enzymes and probiotics to the mix.

Note, however, that fermentation does not reduce goitrogens in crucifers. Since fermented crucifers such as sauerkraut are typically eaten as a condiment and, hence, in small amounts, consumption is usually fine if the diet is rich in iodine and there is no thyroid condition present.

Once again, science is bearing out the wisdom of traditional food preparation practices!

5 Healthfoods that Can Tax Your Digestive System
The Dark Side of Crucifers: Goitrogens

3 Simple Ways to Eat Super Healthy on a Tight Budget