Healthy Home Economist / Healthy Living / Are Tiger Nuts a “Superfood”? Are They Safe to Eat?

Are Tiger Nuts a “Superfood”? Are They Safe to Eat? 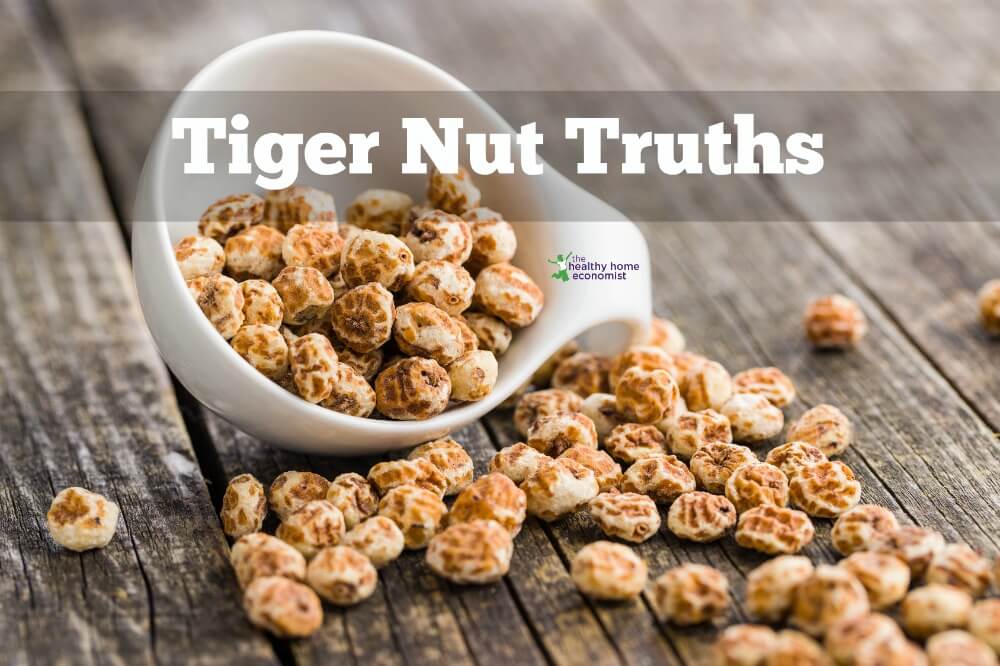 For almost 3000 years, much of the world ate (and many parts still eat) a wild plant that is now a domesticated food – the tiger nut.

One of the earliest records of this tuberous plant came from Theophrastus, a botanist living on the Greek island of Lesbos. Around 300 BC, he wrote in Historia Plantarum that residents of the area collected tiger nut tubers and cooked them until they became very sweet. They would then eat them as dessert.

While called a tiger nut, these small hard “earth almonds” actually aren’t a nut at all, but an edible tuber. You can see in the picture above how the unique coloration and the almond-like size resulted in these common names!

Many places, especially non-native regions, view this tuber as a weed and a nuisance one at that. More on that below!

The consumption of tiger nuts was widespread in the ancient world – from India to China, from Southern Europe to central Africa.

Archeologists have found traces of tiger nut consumption from almost 10,000 years ago! In Egypt, it ranks as one if not the oldest recorded cultivated plant. Egypt seemed to take a special liking to this food.

Dried, the tubers resemble shriveled, mummified knuckles. That’s somewhat fitting, because the earliest records of tiger nuts date back to ancient Egypt, where they were valuable and loved enough to be entombed and discovered with buried Egyptians from the 4th millennium B.C. to the 5th century A.D. In the tomb of Vizier Rekh-Mi-Re’, a high-ranking ancient Egyptian official buried in the 15th century B.C., a wall painting shows workers shoveling heaps of the stuff while a scribe counts the amount. (1)

The plant has since moved well beyond its original native ranges. Today, it is reviled by many farmers and in some parts of the world viewed as one of the worst agricultural weeds.

Tiger nuts get their reputation as a weed because of their reproductive qualities.

Plants can reproduce in many ways – by seeds, by rhizome, by cloning, and more. Some plants do more than one of these… some do them all. Such is the tiger nut!

Since it reproduces in so many ways, especially through cloning (think potatoes) and rhizomes (think sweet potatoes), it will multiply rapidly in disturbed soils. Its seed production reproduction is also prolific.

(Tiger nut)can produce up to 2420 seeds per plant. The plant foliage is very tough and fibrous and is often mistaken for a grass. The roots are an extensive and complex system of fine, fibrous roots and scaly rhizomes with small, hard, spherical tubers and basal bulbs attached. The tubers are 0.3 – 1.9 cm (1/8 to 3/4 inches) in diameter and the colors vary between yellow, brown, and black. One plant can produce several hundred to several thousand tubers during a single growing season. (2)

Thousands of seeds and thousands of tubers? You can see how quickly tiger nut can spread if given the opportunity. (3)

Their unique appearance after harvesting is what gives them their name. They are washed and then sun-dried for up to three months. During this time, they shrink, the skin wrinkles, and in some ways, they’re appearance reminds me of peanuts or other nuts.

Because of its prevalence in Middle Eastern and certain Asian areas, most of the research on tiger nuts have originated in these parts of the world. This makes some of it hard to read.

Yet, there is extensive work showing numerous possible benefits.

Tiger nuts are somewhere between a tuber and a nut on the nutritional spectrum. This is another reason they are associated with nuts.

They contain modest amounts of a number of nutrients – potassium, phosphorous, iron, zinc, and the like. However, the level of all of these is at or below 10% of the RDA.

I would not consider them nutrient-dense food.

Otherwise, the only noteworthy nutrient in the nuts is a high vitamin E content. This explains why tiger nut oil is popular in the cosmetic industry.

Fiber and Starch Most Prevalent Nutrients

Tiger nuts do have a lot of two things – fiber and starch.

Chufas are, in fact, extremely starchy – containing more than either potatoes or sweet potatoes.

The most beneficial type of starch, known as “resistant starch”, is quite high as well.  Thus, they are often considered a good prebiotic. In other words, a food that helps feed the beneficial microbes that live in our digestive tract.

A single serving is almost half of the daily recommendation for fiber! So for those with digestive issues or who are sensitive to high fiber, harder to digest foods, tiger nuts may be a no go.

Chufa nuts also contain a fair amount of oil – anywhere from 20 to almost 40%. That is one oily tuber!

What kind of oil is it?

The tiger nut has a fatty acid profile similar to unrefined avocado oil or olives – with about 18% saturated fat and 82% unsaturated.

Since tiger nuts aren’t part of the nut family, people with nut allergies do not need to avoid them.

Thus, they aren’t high in anti-nutrients and do not require soaking or any special preparation before eating.

On occasion, people are sensitive to them, though such an allergy appears rare.

For those on GAPS, SCD or similar gut-healing diets, the tiger nut is not allowed due to its high amount of starch. Consuming this hard to digest carbohydrate could trigger a relapse of autoimmune symptoms for those individuals.

Starchy foods are also avoided by those following a ketogenic diet.

The good news is that tiger nuts are both gluten-free and grain-free and thus acceptable to those who eat Paleo.

Tiger nuts do have a few things going for them in current research. First, there may be possible benefits for diabetics due to some additional compounds beyond starch and fiber. The study wasn’t actually done with tiger nuts, however. The research utilized another plant with very similar composition and properties. (4)

Another study points to possible reproductive benefits, especially in men. (5)

Chufa nuts show good anti-bacterial properties in lab tests, which may indicate promise for dealing with standard and antibiotic-resistant infections. (6)

Overall, the research on tiger nuts is quite thin as of this writing. Thus, the health claims associated with their consumption require additional study.

If you are in a milder, warmer climate, tiger nuts are very easy to grow. Just realize that they are also very hard to stop growing!

The plant’s root system is very hard to remove intact – even small pieces left behind can quickly regenerate into a new plant.

The same is true of any missed tubers. Also, the plants are quite hardy, resistant to drought and a host of other adverse conditions. If you want to try growing one, I suggest doing it in a container or planter instead of in the ground, and make sure that it doesn’t go to seed!

How to Eat Tiger Nuts

There are many, many ways to consume tiger nuts, traditional and otherwise. The overall taste by itself is rather unimpressive, as is the texture.

Traditionally, tiger nuts were married to local raw honey or dates. This is unsurprising given that the research shows benefits to diabetics and blood sugar regulation!

You can try it as an addition to a grain-free granola or trail mix.

If you have a food processor, you can combine tiger nuts with dates and make a date/nut paste that is a snack unto itself. Another option is to lightly toast the chufa nuts with sea salt and add some honey after roasting.

If you want to try a drink made from tiger nuts, Organic Gemini offers an excellent line of tiger nut products. Some people like to add tiger nut flour to smoothies for a boost of resistant starch.

Instead of buying pre-made tiger nut flour for this purpose, it is best to grind raw tiger nuts fresh at home (this inexpensive coffee grinder works very well and is a snap to clean). This is due to the high percentage of oil in tiger nuts which has the potential for rancidity.

Are Tiger Nuts a Superfood?

Given that tiger nuts are not overly nutrient-dense, easily become invasive and overpowering to other native plants, are somewhat low yielding per acre, and aren’t that tasty, the hubbub over them seems a bit much to me.

They are certainly in no way deserving of superfood status!

That said, you may enjoy this traditional food with the confusing name from time to time. The best use is as a whole food supplement of resistant starch similar to potato starch or banana flour.

Just don’t make it a staple in the diet due to its low nutrient density and high fiber which could prove irritating to the gut of sensitive individuals.