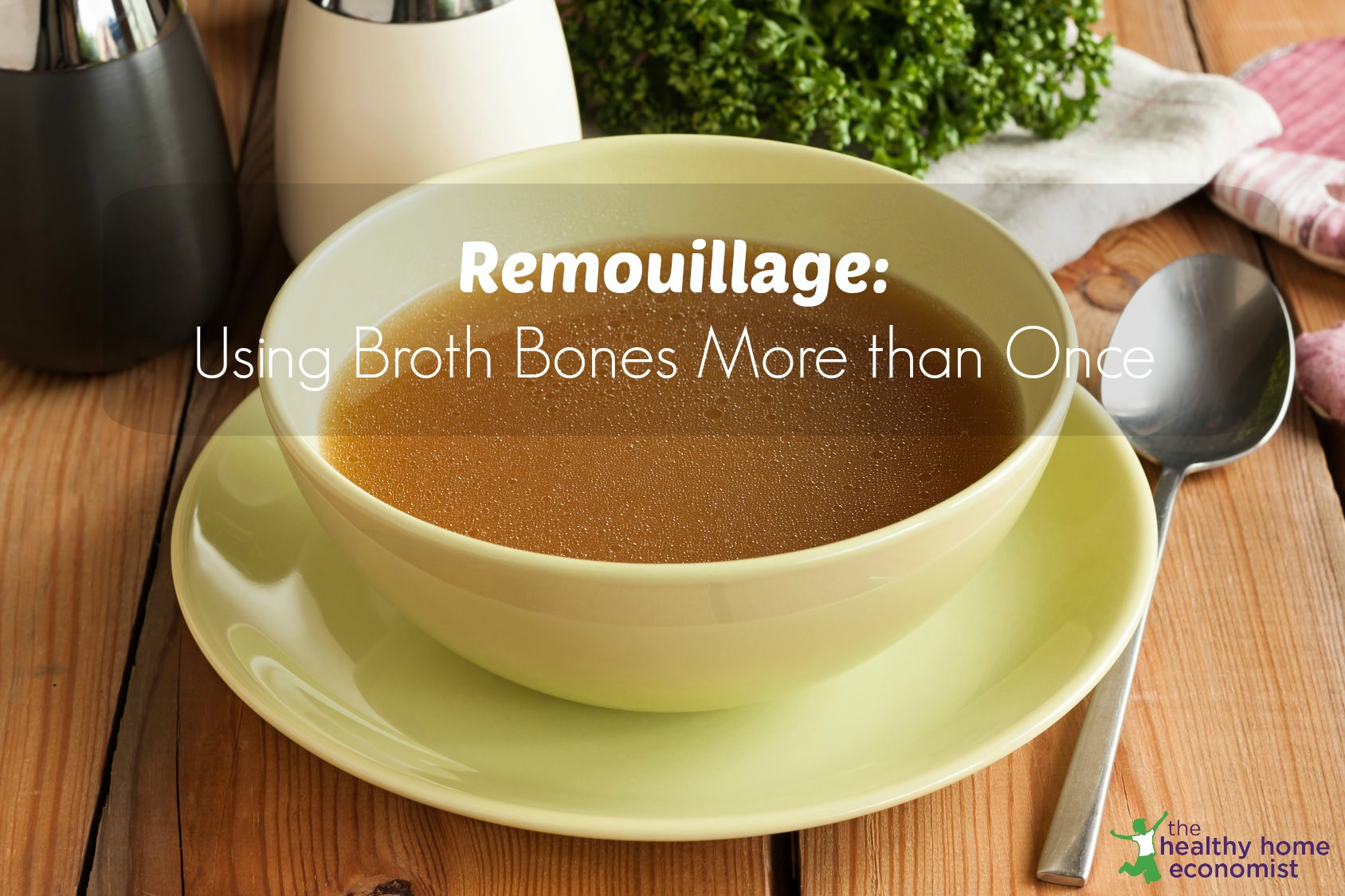 The Culinary Arts Dictionary defines the French word remouillage as a weak stock made by resimmering bones that have been used to make bone broth once already.

Indeed, this is exactly what remouillage is:  a rewetting or remoistening of soup bones that have already served their purpose with a previous batch of bone broth or stock (not to be confused with meat stock).

Despite the fact that my Father’s side of the family is French and I’ve been an avid stock maker for nearly 2 decades, I’d never actually practiced the art of remouillage until a few years ago.  It’s not that I hadn’t heard about it before.

Folks have mentioned  to me in the past that they reused soup bones (not using the actual term remouillage), but I’ll admit that this approach seemed at first to be an example of frugality run amok. If you’ve simmered bones once, how could resimmering them possibly achieve anything close to the delectable flavor and superior nutrition imparted to soups, sauces, and gravies made with the first batch of bone broth?

As it turns out, there is always something new to learn with Traditional Cooking, and I am ecstatic that I have finally implemented this age old aspect of French cuisine into my culinary routine on a regular basis.

Better late than never I suppose!

The second batch of stock made from the same soup bones is definitely weaker than the first even when adding fresh carrots, celery, onions, and a bay leaf or two (it’s not advisable to reuse the vegetables from the first batch of stock), but you can easily compensate for this by simply boiling the remouillage down until the flavor and color is roughly comparable with the first batch.

The final result yields less stock – about half in my brief experience with the technique, but the upside is that you will have more thoroughly made use of your investment in quality soup bones!

What Type of Bones Work for Remouillage?

What types of bones work best when making remouillage? So far, I’ve used all types of poultry (including chicken feet) and beef bones. All have worked very well and produced excellent results.

I am not in favor of using fish heads for stock more than once, however. The heads pretty much disintegrates after the first batch, and fish heads are so cheap to buy anyway. I pay $1.50/lb for top quality snapper heads.

Making Stock With the Same Bones More than Twice

Some cooks claim to use hard bones like beef or buffalo for making stock not once, not twice, but three or more times!  An article by Amanda Rose on The Nourishing Gourmet claims that high gelatin bones called “beef feet” can produce up to 12 batches of gelatinous stock!

How many times should you make remouillage considering that each batch will have less flavor than the previous one?

The choice is totally up to you.  Certainly, when the bones disintegrate is a good sign to stop (as with the fish heads which last only once), but if you have beef bones that are still hard and obviously have some minerals left in them after the first couple of batches, then go ahead and make another batch and see what happens.

You aren’t losing anything by trying another batch, and if the stock turns out too weak tasting, simply boil it down until it is flavorful enough to use as a base for your soups, sauces, and gravies. Another option is to use the very weak remouillage to cook rice in instead of plain filtered water.

Are you already a fan of remouillage?  If so, please share your tips with all of us in the comments section.

Gum Additives in Food. Which Ones to Avoid?