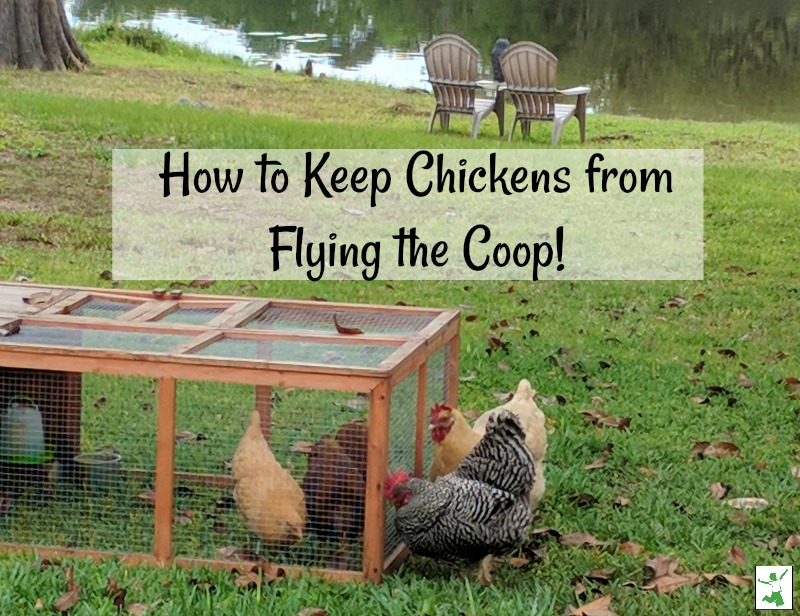 If you keep backyard chickens for eggs, it’s very important to keep them within the fixed or moveable coop area that you have set up for them. This keeps them safe from predators and prevents neighbors from getting annoyed!

What do you do if you have a resourceful chicken who figures out how to fly the coop?

If you have one or more chickens that are getting loose too often, the quick and easy solution is to trim the feathers of one wing.

Clipping a chicken’s wing is a completely painless process much like trimming our hair or clipping the nails of a dog.

Why Only One Wing?

The reason you only clip one wing is to unbalance the chicken’s flight.

If you trim both wings, a chicken with strong wings might still be able to get enough lift by flapping hard enough to continue to get loose on a regular basis.

How Many Feathers to Trim?

Only the ten longest “flight” feathers on one wing need to be trimmed to hamper a chicken’s ability to fly. Some people suggest trimming the left wing, but it really doesn’t matter in my experience.

Others suggest to trim outward, away from the chicken’s body, but I haven’t found this makes much difference either.

The important thing is to simply trim the ten longest flight feathers at about the halfway point.

Be sure to use a very sharp pair of shears to do the job!

The video below demonstrates the quick and easy process.

The process of clipping a chicken’s wing only needs to be done about once per year after she molts and grows new feathers.

For young chickens, you would need to do it at about six months of age but before their first molt.

As mentioned above, clipping the flight feathers is completely painless.

It keeps the chicken safe and keeps your neighbors happy because a loose chicken is bound to start digging up whatever landscaping is close by!

Does a Clipped Wing Look Unsightly?

Once you clip one of your hen’s wings, it won’t show at all when she is walking or running around.

The flight feathers are tucked under the rest of the wing near the body, so the trimmed feathers don’t even show.

You won’t even be able to tell which hens have trimmed wings and which ones don’t!

Do You Need to Clip All Your Chickens Wings?

Some authorities suggest that you clip one wing of all your chickens every year after they grow new feathers.

I don’t do this. I only clip the wing of chickens that are flying the coop.

Otherwise, why bother to do it if they aren’t getting loose?

Video: How to Clip a Chicken’s Wing

The one minute video below shows you how simple it is to clip a chicken’s wing to keep her safe all year long.

It works for roosters too!

Do you have one or more backyard chickens that keep getting loose? I hope this easy solution that solved the problem for me works for you too!