You are here: Home / Natural Remedies / How to Make Raw Apple Cider Vinegar
Jump to Recipe

How and why to to make apple cider vinegar that is raw, enzyme and probiotic-rich for all your detoxification, cooking, and medicinal needs. This recipe uses raw honey, which makes the final result even more healthful and potent. 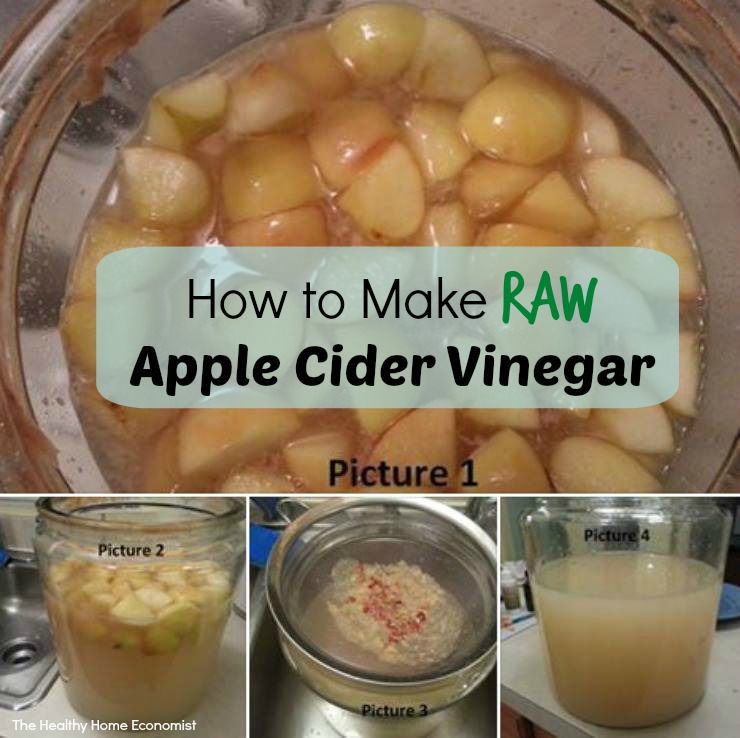 It’s apple season in many parts of North America which will continue through the Fall. Time to take advantage of the seasonal bounty and make some raw apple cider vinegar! If you don’t have locally grown apples available in your community, a bag of organic apples from the health food store or veggie co-op will work just fine.

Unpasteurized, or raw apple cider vinegar is expensive, so making your own is very thrifty. A typical quart of organic, raw apple cider vinegar will run you $5 or more at most health food stores. You can make a whole gallon, four times that amount, yourself for about the same price or even less if you use apple scraps that you were going to throw out or use for composting anyway.

A mixture of apples produces the best tasting and most healthful raw apple cider vinegar. Making it is very similar to kombucha. If you’ve made this or other fermented beverages before, you will find the process simple.

If homebrewing is new to you, try these approximate ratios for your first batch or two and then change it up from there to your own personal liking:

In my neck of the woods, bitter-tasting apples are hard to find. If this is your predicament as well, simply increase the proportion of sweet apples to 60% and the sharp-tasting apples to 40%. While the flavor of this mixture won’t be as complex as with the inclusion of some bitter apples, it will still taste fine.

If all you have is a single apple tree in the backyard, however, feel free to use just that one variety to make your raw apple cider vinegar!

The well known Master Tonic, a natural flu anti-viral, uses raw apple cider vinegar as the fermenting medium. It’s also an essential ingredient in all types of bone broth made at home.

The recipe below outlines step by step instructions on how to make apple cider vinegar that is potent enough to use for all your medicinal, detoxification, cleaning and cooking needs. It is no doubt the most beneficial vinegar to have in your home followed by traditional balsamic vinegar.

Please always store any type of vinegar in glass containers. Storing in plastic risks leeching contaminants into your cider vinegar.

Your homemade apple cider vinegar can be used not only in the kitchen and for cleaning. Try it in a vinegar bath (2 cups per tubful) to greatly aid detoxification. It works much better than a skin-damaging bleach bath for relieving eczema symptoms too.

To ease acid reflux symptoms and for a natural cal/mag supplement, soak crushed eggshells in your homemade ACV to make a simple eggshell and apple cider vinegar remedy. 1 teaspoon in 8 oz of water up to 3 times a day works wonders.

DIY ACV can also be used to make a vinegar compress for sprains and bruises. This is what people used before ice was readily available, and raw vinegar works extremely well too!

How to Use the ACV Mother

After you’ve made a few batches of ACV at home, you may notice that you have a number of vinegar mothers stacking up! What to do with them?

First of all, know that these are living cultures that have a number of beneficial uses around the home. Here are some suggested ideas instead of just throwing them out: 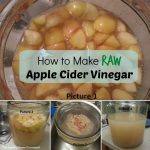 Step by step instructions on how to make apple cider vinegar that is raw, enzyme and probiotic rich for all your detoxification, cooking, and medicinal needs.

Cane sugar may be substituted for raw honey if desired. Using raw honey will result in the healthiest apple cider vinegar, however.

Raw apple cider vinegar doesn't go bad, but if you leave it for a long time, another mother culture will likely form on top. This is fine, just strain it again if desired and dilute with a bit of water if the taste has become too strong.