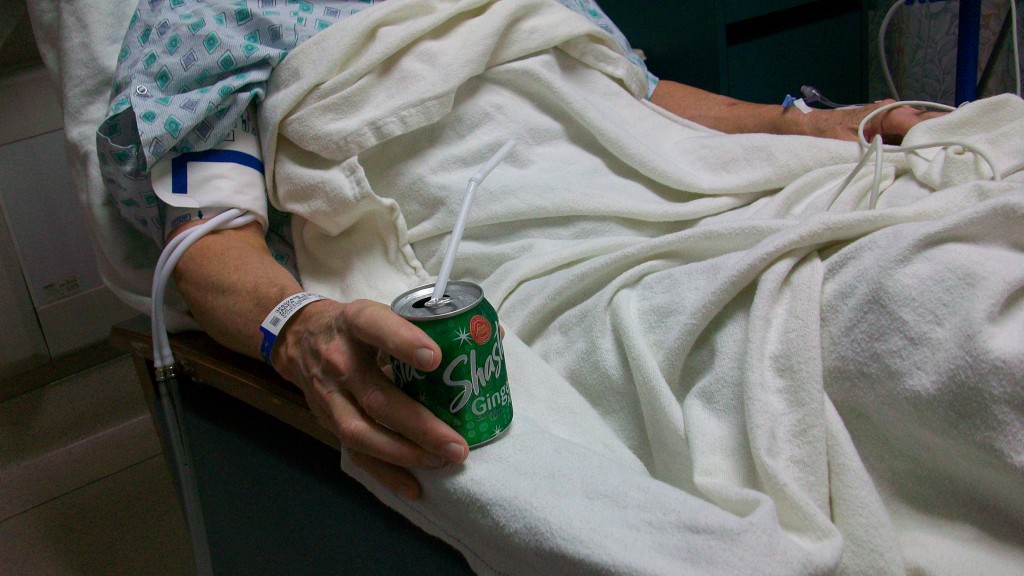 My friend Paula’s husband had surgery recently and guess what he was given by the nurses in the recovery room?

Shasta soda!  Above is a picture of Rick shortly after Paula walked in to visit right after his surgery.

Let’s check out the ingredients of the Shasta soda and see if medical personnel should really be handing this stuff out to vulnerable people who have just had major surgery:

The big baddies I see in this ingredients list are:

High Fructose Corn Syrup: Calorie for calorie, high fructose corn syrup is more dangerous than white sugar as it is more likely to cause weight gain as published in the Journal of American Clinical Nutrition in 2004. Large amounts of fructose consumed such as what would happen with a can of soda turn quickly into triglycerides in the bloodstream or are stored as fat.

Not a very wise drink choice for recovering surgery patients or anyone for that matter!

Citric Acid:  Manufactured from corn, very likely genetically modified.  Citric acid coming from corn has traces of MSG in it which is a proven neurotoxin which triggers a wide variety of physical symptoms in many people some very severe.

Potassium Benzoate:  A dangerous chemical preservative similar to sodium benzoate.  I wrote a post awhile back on how sodium benzoate damages DNA and the link to neurodegenerative diseases like Parkinson’s.  Potassium Benzoate is in the same class of chemicals and should not be consumed particularly by vulnerable post-op patients!

Sucralose:  This is an artificial sweetener that is manufactured by chlorinating natural sugar. The Sucralose Toxicity Information Center states that:

While it is unlikely that sucralose is as toxic as the poisoning people are experiencing from Monsanato’s aspartame, it is clear from the hazards seen in pre-approval research and from its chemical structure that years or decades of use may contribute to serious chronic immunological or neurological disorders.

Natural Flavor:  The problem with “natural flavor” is that it is not natural.  You never know what is hidden as this is an industry “catch all” label. It is best to avoid products that have “natural flavor” listed just to be on the safe side.

Why all the chemicals and dangerous sweeteners?

Do you really think it’s wise to be listening to these people for any sort of dietary advice?