Healthy Home Economist / Archives / Celebrity Health / If You Are What You Eat, You Won’t Believe the Marilyn Monroe Diet 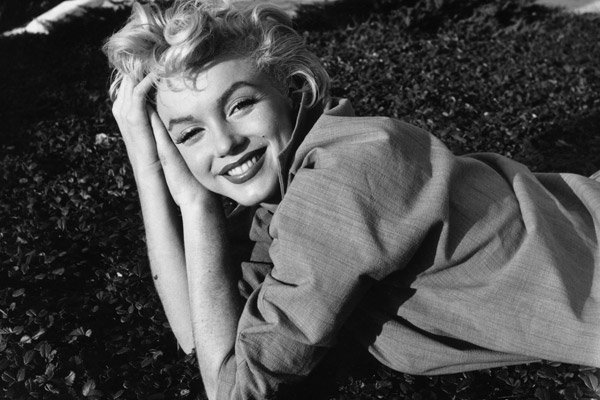 At the height of her career, Marilyn Monroe was undoubtedly considered one of the most beautiful women in the world. The curvaceous, full figured actress certainly represented the antithesis of the scary thin, androgynous models of today.

Artificially made “health” foods, protein powders, bars, drinks, mixes and supplements take center stage instead of the basic, traditional and highly nourishing fare such as what Ms. Monroe preferred.

The September 1952 edition of Pageant magazine highlighted the Marilyn Monroe diet, which was comprised of extremely simple fare, written in her own words.

For breakfast, Ms. Monroe whipped two raw eggs into a glass of warm whole milk to drink. Interesting that she didn’t opt for skim. Eggs and milk were her favored morning fare even while traveling and staying in hotels. 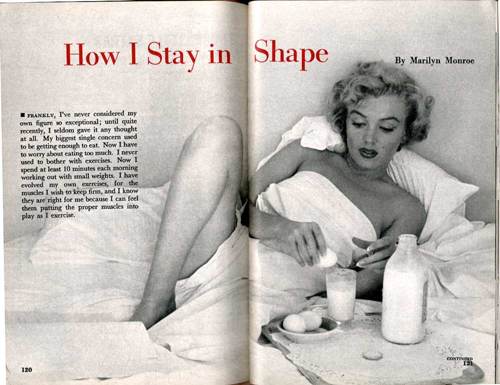 Dinners were equally nutrient dense. Instead of opting for the best restaurant food which she undoubtedly could easily afford, Marilyn would stop at a market near her hotel and select steak, liver, or lamb chops for dinner. She would even broil them herself right in her hotel room with an electric oven!

Ms. Monroe also especially enjoyed raw carrots and usually ate several along with the meat she had chosen for the evening meal.

For treats, ice cream sundaes were the favorite on the way home from her evening drama classes. No mention of any bread, cakes, cookies or pies.

A diet focused on nutrient rich animal foods with a notable absence of grain based and starchy foods was likely a key reason she only required light exercise to maintain her enviable figure. While this doesn’t work for every woman, it does for many, even a curvy one like Ms. Monroe.  She spent only 10 minutes each morning working out with small weights. Light jogging, yoga and horseback riding were other active pursuits she enjoyed.  No special trainers, heavy lifting or sweaty workouts of the day were a part of her life.

Does the Marilyn Monroe Diet Offer Any Wisdom for Today’s Generation?

There has been renewed interest in the Marilyn Monroe diet since the marking of the 50th anniversary of her death in August 2012.

Many would find the very simple Marilyn Monroe diet unbearably boring and uninspired. However, the basic premise she followed was sound albeit controversial and perhaps even quirky for her day.

Could women both young and old derive some helpful pointers in their own diet and lifestyle regimens through knowledge of the Marilyn Monroe diet?  I, for one, believe they could!  What about you?