A simple hydrogen peroxide bath is an effective, inexpensive, and relaxing way to help relieve and disinfect skin infections of all kinds without damage or dryness to the skin. 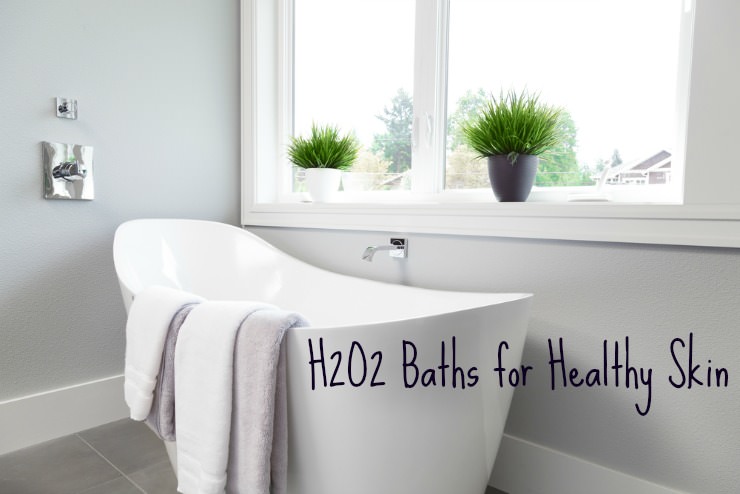 My maternal Grandmother was an amazing traditional cook. Unfortunately, in her later years, she was unable to stand to do much cooking or baking. This was due to an unfortunate predisposition to leg ulcers which caused her great discomfort and a loss of mobility. A natural remedy that could have helped tremendously is a simple regimen of regular hydrogen peroxide baths.

The wonders of this healing, antiseptic protocol (not to be confused with bleach baths used for eczema treatment) was not well known at the time, however.

What is Hydrogen Peroxide?

The peroxide bond in hydrogen peroxide is represented by the two atoms of oxygen (O2). This bond is extremely volatile unlike the single oxygen atom in a molecule of water (H2O) which is very stable.

Most people don’t know that pure hydrogen peroxide will explode if heated to boiling. In addition, it causes serious contact burns to the skin and can set certain materials on fire with contact.

As a result, hydrogen peroxide can only be purchased by consumers as a dilute solution. For household use, the 3% hydrogen peroxide from the drugstore in a brown bottle works very well for cleaning and disinfecting surfaces. I use this dilution strength along with white vinegar in a sinkful of water to clean pesticide residue off conventional produce when organic is unavailable.

Using H2O2 as a Natural Remedy

The very mild, dilute H2O2 solution can also be used as a very safe sanitizer for the body. For example, the toothpaste recipe recommended by a well-respected holistic dentist in my community to help resolve periodontal disease consists of baking soda mixed with 3% hydrogen peroxide.

I also use a few drops of 3% hydrogen peroxide applied with an eyedropper into my children’s ears after they go swimming in a pool or lake. They giggle and enjoy the bubbly sensation as the hydrogen peroxide oxidizes inside their ear canals, which is how its disinfection magic works.

Colloidal silver works well for this purpose too. However, avoid using ear candles.

This type of hydrogen peroxide is not readily available in stores either, so you usually must special order or have it shipped to you online (source).

Please note that food grade hydrogen peroxide has gotten a bad rap in recent years as a natural remedy, primarily because of claims of its use for oxygenation therapy both internally and externally to treat everything from low energy to cancer.

These questionable uses of H2O2 are not in any way suggested or recommended by this article.

Instead, food-grade hydrogen peroxide can be added to warm bath water as a safe and effective way to help disinfect and heal skin infections of all kinds from the neck down.

The Hydrogen Peroxide Bath for Disinfection and Healing

Using food-grade hydrogen peroxide as a detoxification bath for healing and disinfection is recommended by Dr. Lawrence Wilson MD. (1)

In his practice, he has utilized peroxide baths with great success to eliminate infections of all kinds from the lower half of the body even including STDs. If you are considering using a peroxide bath for a yeast infection, however, note that an apple cider vinegar bath also works very well and possibly better for some people.

Dr. Wilson writes that a dozen or more peroxide baths may be needed over a period of a month or more to achieve desired and lasting results. However, he recommends that no more than 2 or 3 times weekly and never more than one in a single day should be attempted as this can be too much of a good thing and backfire with symptoms of fatigue, brain fog, and lethargy in general.

As mentioned earlier, my holistic dentist recommends a combination of H2O2 and baking soda to disinfect the mouth and gums, prevent gum disease and resolve periodontitis. He says it is one of the best ways to ensure you have all your teeth into old age.

To commence a hydrogen peroxide cleansing bath, add one cup of food-grade hydrogen peroxide to a tubful of water that is hot but tolerably so. The bath does not need to be completely filled if the skin infections are on the legs or lower torso only, for example. (2)

It is more budget-friendly to get food grade hydrogen peroxide than use the brown bottle from the pharmacy that is diluted to 3%.

Note that COVID-19 has driven prices for H2O2 higher than normal. Be aware that you may be paying more in the short term due to limited availability issues.

How Long to Soak

Once you have the bath ready to go, relax in the tub for at least 40 minutes and up to one hour to give sufficient time for thorough disinfection of whatever skin infections you are attempting to heal.

When your peroxide bath is complete, get out of the bath and dry off.  Do not rinse first.

The goal is to use as close to 1 cup of the food grade hydrogen peroxide without experiencing any burning sensation. This is not beneficial or helpful to the healing process.

A peroxide bath should be relaxing and enjoyable with no discomfort whatsoever. If you have sensitive skin, it is best to start with half a cup and see how you do.

If after getting into the bath, you experience any sort of mild itching or burning sensation, quickly add more warm-hot water to the tub to further dilute the peroxide.

Dr. Lawrence Wilson MD suggests that after a few months to at most a year, the majority of people will no longer require hydrogen peroxide baths for maintenance to keep infections at bay. 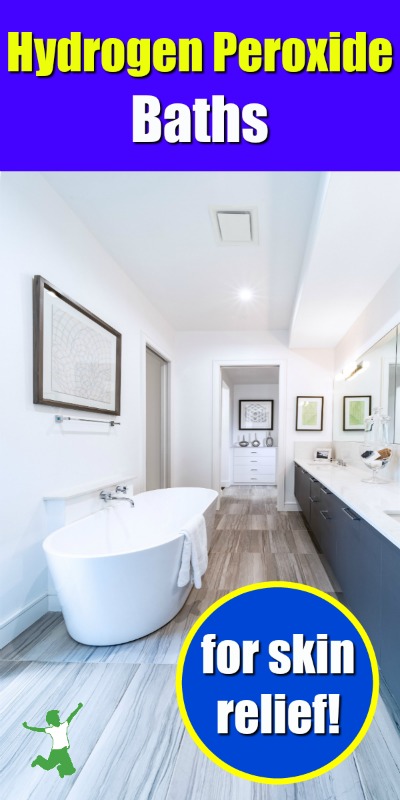 As mentioned above, using more peroxide is not better. One to at most two cups per tubful should be used. If you find that any itching or burning in the peroxide bath occurs then add less, although use up to 2 cups max per bath if you can tolerate it comfortably.

Food grade hydrogen peroxide coming into direct contact with the skin is burning potentially causing harm to cells. This is why H2O2 is not recommended for use directly on wounds or for wound care in general. (3-5)

H2O2 will also bleach or burn through fabric quickly. Be extremely careful as you are pouring it into the bath. Replace the cap immediately when you are finished dispensing the desired amount. This prevents any accidental spills. Because of its corrosivity, it is best to use a glass measuring cup instead of a plastic one.

Like an Epsom salt bath, a hydrogen peroxide bath makes most people sleepy, so best to do it before a nap or at bedtime.

(1-2) Baths for Healing, Lawrence Wilson MD
(3) Hydrogen Peroxide: A Potential Wound Therapeutic Target?
(4) Why Does Hydrogen Peroxide Fizz On Cuts?
(5) Why You Should Not Use H2O2 Directly on Wounds

Do Parasite Zappers Work (and are they safe?)