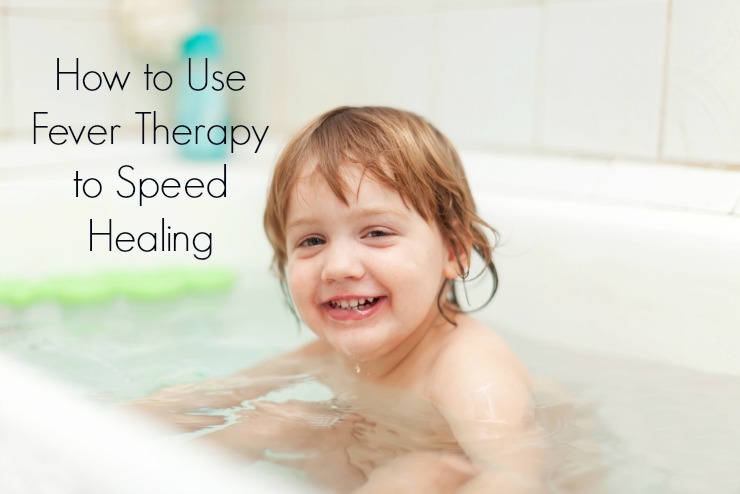 If there is one thing a parent needs to get comfortable with when raising children, it is a fever. In fact, when illness doesn’t produce a fever, it can be beneficial to induce one artificially, a process known as fever bath or fever therapy.

Unfortunately, far too many caregivers panic when a child spikes a fever, reaching for the Tylenol or ibuprofen to suppress what is actually one of the body’s most important defensive reactions to a pathogen. In some cases, caregivers may erroneously believe that reducing the fever somehow makes the child well again, sending him/her to school or an important sporting event rather than to bed for as long as it takes for the fever to resolve itself naturally.

Suppression of one of Mother Nature’s most important protective and detoxifying mechanisms is harmful to the child both in the short term and in the long term.

In the short term, fever suppression actually opens the door to a secondary infection and the likely need for antibiotics to resolve the illness. In other words, if you want to avoid antibiotics, don’t bring down the fever. The heat of the fever significantly slows the speed with which a pathogen can replicate and spread, thus giving the body more time to resolve the problem naturally.

Children whose parents allow them to experience fevers without medication will many times exhibit no other symptoms. A fever spike accompanied by rest and nourishment alone will, within a day or two, typically resolve the illness with no other symptoms experienced or treatment required. Bring the fever down with meds, however, and there will likely be a sinus infection and coughing, mucous, rash, vomiting, diarrhea or other issues to deal with that will extend the illness possibly with the need for antibiotics.

In The Nourishing Traditions Book of Baby & Child Care, authors Sally Fallon Morell and Tom Cowan MD summarize what science has to say about the benefits of fever:

Possibly the most startling research to date on the dangers of forcible reduction in fever involves the extremely high correlation between Tylenol (acetaminophen) use and asthma. Researchers at the University of A Coruna in Spain asked the parents of 10,371 children ages 6-7 and 10,372 adolescents aged 13-14 whether their children had asthma and how often they had been given acetaminophen within the previous year and when they were babies. The children in the younger age group who had received the medicine only once per year were at 70% greater risk for asthma while those receiving Tylenol once a month or more were shockingly 540% more likely to have asthma. The study, published in the European Journal of Public Health, also found that children who had even a single dose of Tylenol before their first birthday had a 60% risk of developing asthma.

In the older age group of 13 and 14 year-olds, asthma was 40 percent more likely if they had taken acetaminophen within the previous 12 months. The young teenagers were 250% more at risk if they took it once a month. The researchers speculated that Tylenol, called paracetamol in the UK, may reduce a potent antioxidant called glutathione in the lungs and blood, which results in damage to the lung tissue.

Dangers of Reducing Fever with Ibuprofen

Lest you think that you will simply switch to ibuprofen (Advil and Motrin) to bring a fever down instead of the risky Tylenol, know that NSAID painkillers carry their own set of risks for children. There is a clear link between the use of these painkillers and kidney problems.

A study published in the Journal of Pediatrics examined the number of instances of acute kidney injury (AKI) at one children’s hospital over an 11-year period. The researchers found that of the 1015 patients admitted for this serious condition, 27 of the cases were due to the use of non-steroidal anti-inflammatory drugs (NSAIDs) like ibuprofen (Advil®) and naproxen (Aleve®).  Most concerning, these problems occurred in the vast majority of cases (75%) despite the correct dosage being used!  Children younger than five were more likely to have severe cases of acute kidney injury requiring dialysis.

What to Do for Children Prone to Febrile Seizures

Febrile seizures are convulsions brought on by a fever in infants or small children up to the age of 5. They can be scary to witness, but the good news is that they are not dangerous in the majority of instances.

Conventional medicine maintains that no one knows why febrile seizures occur, with some evidence suggesting that they’re linked to certain viruses. However, old school doctors believed that low blood sugar would bring on such episodes in susceptible children due to the rapid metabolism and threat of dehydration that occurs with fevers. My father used to recommend to families in his practice to have a child sip 50 percent diluted fresh fruit juice to keep tissues hydrated and blood sugar levels in the normal range to prevent this from occurring. For sleepy children, he suggested administering 4 ounces of fruit juice diluted with water rectally using a bulb syringe. The body will readily absorb this nourishment rectally without it running out.

If your child is prone to febrile seizures, it is important to consult with a holistic practitioner about natural strategies such as these that don’t involve the forcible reduction of the beneficial fever with drugs that risk long term side effects for your child’s health.

You are hopefully now convinced that fever is your friend, not your foe and that forcible reduction with medication is a risky proposition for your child’s health.

If you or your child tends not to spike a fever easily, know that you can help the process along as necessary using the age-old remedy known as fever therapy which involves hot bathing – known as fever baths. Fever baths are a wonderful way to bring the body’s natural defenses to your aid to fight an illness where little to no fever may be present.

Please note that fever baths are not appropriate for very young children and pregnant women or for those who experience problems from getting overheated. If you have a chronic illness, you really need to have your health practitioner approve the practice before undertaking it.

Fever baths were frequently recommended by old-time doctors, the kind who used to make house calls. My father was one of these!

The popularity of fever baths is returning anew in this modern age where parents are increasingly seeking the wisdom of old to avoid the use of dangerous medications with their children unless absolutely necessary.

Here are the steps for conducting an effective fever bath for either yourself or your child according to the Heartland Naturopathic Clinic. Be sure to have a thermometer, drink plenty of tepid water before, during and after the fever bath, and have something warm like a cotton robe or sweatsuit plus socks to wear afterward. You should also plan to rest for a couple of hours after the treatment.

Step 1. Start the bath with the hottest water you can stand without it being terribly uncomfortable. You should not feel any discomfort with this process! You should be in the bath as it is filling as this is better than trying to get into the bath after it is drawn. If you are preparing the fever bath for your child, get in there with him/her to ensure it isn’t too hot. Note that if you fill the tub with hot water first and then try to get in, it won’t work as well.

Note also that, in my experience, you don’t need to sit in the hot water all the way up to your neck to achieve great results. I’ve found that simply sitting in very warm water waist-deep is typically sufficient to achieve an artificial fever effect. No need to feel like a boiled lobster with this process!

Step 2. Take your temperature with an oral thermometer while you are in the bath. After your temperature reaches 101 F/38 C, stay in the bath for 20 minutes more.  If at any time you feel the need to get out because you are too hot, do so!   Your goal is to keep your body’s temperature at that level for the full 20 minutes, but less is still beneficial if you aren’t used to it. You may experience heavy sweating by the time your body temperature reaches 101 F/38 C similar to the effect experienced in a ginger bath. Drink as much water as you like, but it should be room temperature water, not cold and certainly not with ice.

Step 3. When it is time to get out of the bath, be very careful as you may feel faint. Dry off and cover yourself quickly including a pair of socks so you don’t chill. Covering your head with a towel is also a good idea even though your hair didn’t get wet in the bath. Most body heat is lost via the head.

Step 4. Get into bed immediately. You will likely be very hot and sweaty. This is good and what you want! Stay covered up and sleep if you can.

Step 5.  After you’ve been in bed covered up for at least 45 minutes and up to two hours, your body temperature will have cooled off back to normal.  Get out of bed and quickly remove the damp clothing and change into dry clothes before you get chilled.  Your fever bath is now complete.

Fever baths may be used up to twice per day during the worst point of infection. They are most beneficial before the infection has peaked out, which is the time just before you start to get better.

I actually used a fever bath just last week when I had a cold to speed detoxification and healing. It blew that thing out and it was gone in about 12 hours flat!

Ibuprofen Can Present Risks for Kids
Tylenol Use Even Once Per Month Raises Asthma Risk 540%
Fever is a Friend
Epsom Salt Baths: Modern Necessity for Health?
Detox Bathing: Which are Best and For What Ailments

Coffee Enemas and the Effects on Gut Flora