Heirloom popcorn reinvents a modern snack with better flavor and nutrition with the added bonus of better digestibility and no hulls stuck in your teeth. 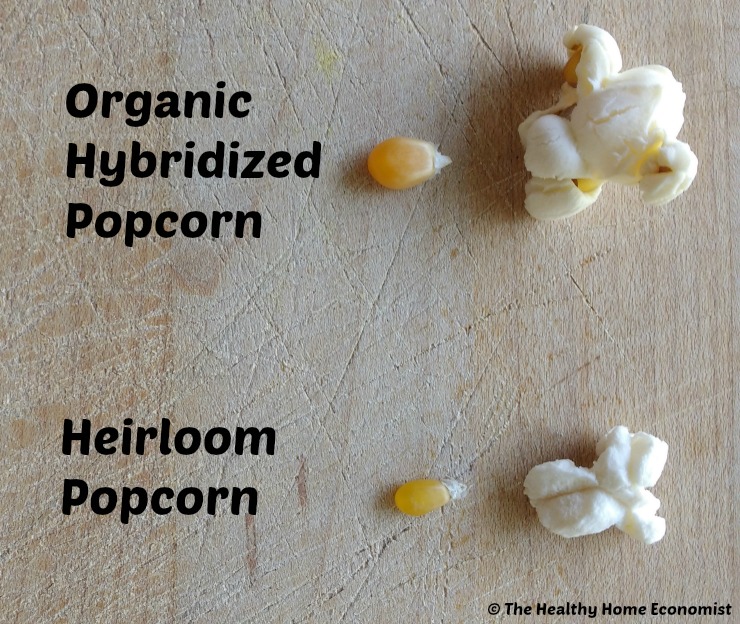 When it comes to making snacks for my family, popcorn cooked in a healthy fat and sprinkled with sea salt is one of my all-time favorites.

Some folks like to add even more nutrition by sprinkling their bowl of popcorn with brewer’s yeast. This practice is a very tasty way to add lots of B vitamins. Be sure to get a quality source, though, as most are fortified with synthetic folic acid and B12.

You don’t even need any special equipment to make it. Who needs yet another kitchen appliance to find room to store anyway? A large frying pan with a (preferably) glass lid is all that is needed to make a large bowl of freshly popped kernels in just a few minutes. It’s so fast to make that I regularly pop a batch in the wee hours of the morning on schooldays even when I’m in a rush to pack my children’s lunchboxes (this video shows you how).

Daniel Patterson, head chef and owner of the famous restaurant Coi in San Francisco and author of Coi: Stories and Recipes, says that it is amazing “how many well-traveled, well-trained cooks have no idea how to pop popcorn!”

Corn (maize) is a traditional food of the Native Americans who generously shared their knowledge and bounty with the early pioneers. Unfortunately, corn has changed drastically from what it was just a little over a century ago. And, these changes have not been for the better.

Hybridization of crops (selective cross-breeding) which became popular during the “Green Revolution” (talk about a misnomer!) in the mid-1900s to improve yields. This practice changed corn to a nearly unrecognizable form from a taste, flavor, and nutritional perspective.

Worse, genetic engineering of corn in the past couple of decades has added a danger element that consumers are wise to avoid. Note that genetic engineering differs significantly from hybridization. GMO plants have actually had their DNA manipulated adding one or more genes of completely unrelated plant species or even the genes of animals! Frankenfood indeed!

GMO corn cobs are now shockingly allowed to be sold as “fresh corn” in the produce section of supermarkets. It surely won’t be long until even conventional popcorn is GMO. It may be already, but who would know since it doesn’t have to be labeled?

(Most) Organic Popcorn is Hybridized (Heirloom Corn is Not)

While I’ve purchased organic corn kernels to make into popcorn for many years, I didn’t realize until recently that even organic corn is hybridized!

Eating hybridized corn is not an unhealthy practice or dangerous like eating GMO corn. However, hybrid corn is less nutritious and flavorful.

When I realized that even organic popcorn is hybridized, I started searching for an heirloom popcorn alternative (this is the one I’ve been using so far). What I found is very exciting!

Heirloom corn is so different from our modern concept of corn. The differences are really quite shocking. Key physical characteristics of heirloom corn include:

Notice in the picture above how much larger a kernel of hybridized (organic) corn is compared with an heirloom kernel! The resulting popcorn pieces are also much smaller.

While the physical differences between heirloom corn and hybridized corn are striking, the lack of a thick hull is most notable.

The very thin hull of each heirloom kernel allows it to virtually disintegrate when it is popped into popcorn. This makes it much easier to chew without those doggone hulls getting stuck in your teeth!

The lack of hulls also makes it a better option for those with braces, crowns, dentures or tooth problems in general.

You’ve heard of stories of people cracking a tooth eating regular popcorn. This type of thing won’t happen with heirloom!

Heirloom Corn is Easier to Digest

Heirloom corn is not only easier to chew, but it is also easier to digest too. One big reason is the absence of hulls once the kernels are popped (they disintegrate). This characteristic alone makes it easier to pass through the digestive system as this insoluble fiber is missing.

My bet is that heirloom popcorn is also lower in phytic acid and other anti-nutrients, although I have not seen any definitive research on this to date. A lower level of anti-nutrients is important because popcorn is not soaked or sprouted before it is popped.

Perhaps the ease of digestion and potential lower level of anti-nutrients is why anecdotal evidence points to heirloom corn being well tolerated even by those with severe gut issues like ulcerative colitis, diverticulitis, or IBS where regular popcorn is contraindicated. 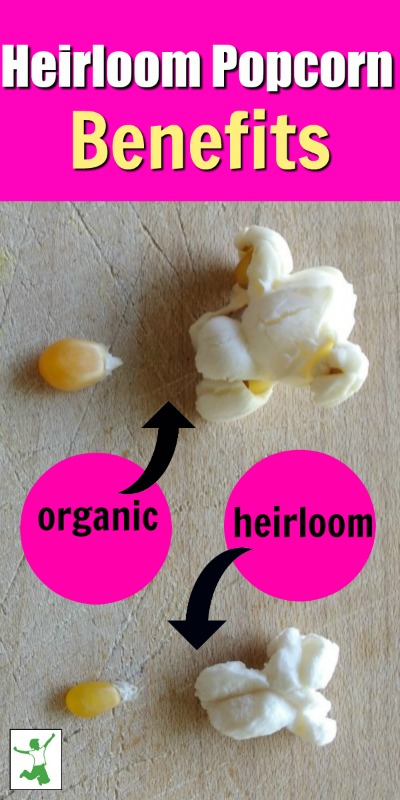 Hybridized corn even when grown organically sacrifices flavor and nutrition for high yield.

In essence, hybrid forms of produce are lower in phytonutrients compared with wild, unmodified versions that have existed for thousands of years. Studies published over the past 15 years confirm the startling fact. The high yield farms of today have unwittingly bred the nutrition right out of our produce (1).

Conveniently, a more nutritious corn kernel ultimately means a more tasty bowl of popcorn! So while your teeth and digestion will thank you for switching over to heirloom popcorn, your tastebuds will be singing too!

In my home, since trying out heirloom popcorn for the first time, my kids ask for nothing else!

Have you already tried it? If so, what was your reaction?