The five characteristics that distinguish healthy cheese from a fake commercial wannabe. The savvy consumer asks these questions before buying to ensure the best quality so they get what they think they paid for. 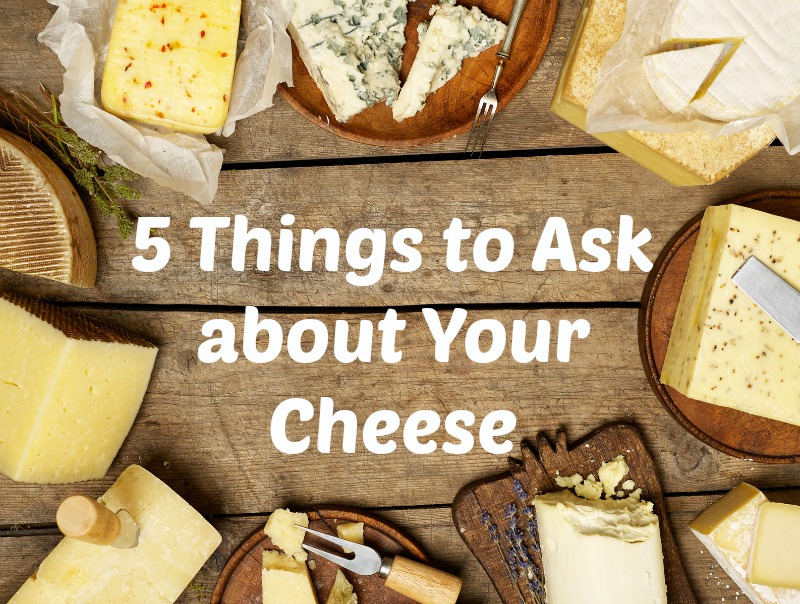 When you are looking to source quality, traditional foods, healthy cheese is certainly right up there at the top of the list! The interesting thing is that most consumers fail to ask the right questions before deciding which cheese to buy.

What do you actually need to look for when sourcing healthy cheese?

Are all real cheeses actually even real?

What does “healthy cheese” even mean?

Over the course of many years, we have learned a fair bit about cheese. This includes what to look for when sourcing that golden, delicious, nutrient-rich food loaded with enzymes, probiotics, and the elusive vitamin K2 in both bacterial-produced and animal form.

Below are five rules of thumb and questions to be sure to ask your cheese supplier. These questions are important above and beyond a simple farm evaluation only. This checklist will help to ensure that the cheese you buy qualifies as truly healthy cheese and is worth the money you paid to buy it.

Rule #1 – Healthy Cheese is Made with Real Salt

When we first started sourcing raw milk cheese for our buying club, we found a great Kentucky farmer to work with. That is, until we asked him where he was getting the salt he used to make the cheese. Then, we found out the sad truth. A lot of real milk cheesemakers are using highly processed, conventional salt in their cheese making! They are ruining all that hard work and pastured goodness with a subpar, industrial product! So the first rule for real cheese is to make sure your farmer is using genuine sea salt, aka real salt.

A lot of options abound for using sea salt. Since I am not into home cheese making myself, I cannot comment on the merits and minuses of different types of salt to particular cheese-making processes and products. But what I can say is that I don’t buy industrially processed salt for my cooking. And, I certainly don’t want my farmers doing so either! Given the very low cost of good quality sea salt in bulk and its easy availability, there is little excuse not to use such salts instead of cheap, industrial kinds.

With our farmer, we made life simple and encouraged him to use economical bulk-sized bags of real salt obtained via our buying club. The transition was smooth and simple.

Seeking to avoid GMOs in your food supply? Do you spend extra time and money avoiding GM-fed animals and food? You may be shocked to learn as I was that the majority of rennet used in US cheesemaking is genetically modified! In cheese production, coagulants called rennet are used to clot milk. The primary enzyme in rennet driving the clotting process is called chymosin, which acts on milk proteins like casein and makes milk curdle. And this rennet is GMO derived in nearly all cheese made in the United States.

Surprisingly, even the most vocal critics of GMOs rarely acknowledge the fact that almost all hard cheeses are GMO foods.

According to Scientific American:

In fact, almost all the hard cheeses made in the United States, and in much of the West, use a genetically engineered protein that is made from genetically engineered yeast and bacteria. That includes cheese made in Vermont, which has passed a mandatory GMO labeling bill–that curiously exempts its iconic Vermont cheese from carrying a GMO label. So much for the consumer’s ‘right to know.’ (1).

So how did biotechnology come to play a role in cheese manufacturing? In the late 1980s, scientists figured out how to transfer a single gene from bovine cells that codes for chymosin into microbes, giving microbes the ability to produce chymosin. These genetically modified microbes are allowed to multiply and cultivated in a fermentation process while they produce and release chymosin into the culture liquid. The chymosin can then be separated and purified. Chymosin produced using this method is termed fermentation-produced chymosin or FPC. Today ninety percent of the cheese in the United States is made using FPC (2).

Of all my requirements for cheese, this is the one that I personally allow the most wiggle room. The best rennet is obtained by killing young calves, who produce it in abundance in order to digest their mom’s milk. Killing lots of baby calves is quite problematic, especially given the issues with veal production in the US. Moreover, it appears that GM rennet is rather indistinguishable from natural, though we have been told this before about GM crops and that claim is rather dubious.

Did you know that raw almonds are actually pasteurized if they are sold at retail in the United States? How about that “grass-fed” beef cows are often fed GMO soy and other such industrial byproducts?

Amid this pervasive climate of consumer misinformation, commercial raw cheeses are not really raw when labeled as such in many cases either!

So many words are tossed around in marketing and the media these days that are meaningless. This is true especially when it comes to real food! Some of these words are even mandated government lies, such as “raw” almonds and so-called “uncured” meat products.

(Most) Healthy Cheese Does Not Exceed this Temperature

With cheese, when a label or cheesemaker claims to be selling “raw milk” or “raw cheese” you need to ask exactly what is meant by that claim. Many of the beneficial components in healthy cheese begin to degrade at just over 110 °F/ 43 °C. This includes beneficial bacteria, certain nutrients, enzymes, and more.

Yet, many so-called raw milk cheeses are heated higher than 110 °F/ 43 °C. How do they get away with this? The reason is because the cheese is heated to a lower temperature than the minimum vat pasteurization point of 145 °F/ 63 °C degrees (or higher depending on the duration of heating).

The ideal raw milk cheeses such as the incredibly nutrient-dense, high vitamin K2 gouda are kept below 100-105 °F/ 38-41 °C at all times. This doesn’t mean that you should never consume cheeses made from milk heated to higher temperatures. Some traditional cheeses actually require it such as mozzarella, gjetost cheese, cream cheese, or ricotta. It’s just a good idea to strive for the majority of cheese consumed to contain all the naturally occurring goodness of raw milk ratcheted up in nutrient density through the alchemy of the cheese-making process.

This one is going to shock you. Some farmers reserve all the raw milk their cows produce for making cheese or for sale. Then, they give highly processed milk replacers sometimes made with soy to the calves instead. If we are what we eat, so too are cows what they eat. And, these calves will be our future milk or meat producers! We want them to enjoy real milk and all its benefits as well. This continuous cycle ensures future healthy cows for us and continued healthy cows for generations to come.

Calves should have access to real raw milk from their moms for around three months after birth. Many thoughtful farmers do this by providing the raw milk to the calves not directly from mom. Instead, after milking mama cow, they supplement the calves through bottle-feeding or similar free choice milk access.

This is a great option because separating baby from mom after a few weeks drastically reduces the risk of the milk becoming contaminated or calves passing pathogens around by trying to nurse on lactating cows other than their mom.

So, make sure the dairy farmer feeding your family is not shortchanging the families of their own cows!

Rule #5 – Real Forage and Supplements for the Healthiest Cheese

Dairy cows historically and traditionally have been provided supplement feed along with forage. This ensures their continued health and that of their offspring. Some farms have superior pastures and seasons that allow for year-round grazing on nutrient-dense, high-density pastures. But not all climates and contexts allow this to happen. Some years have kind, even rains, and adequate sunshine. Other years bring persistent drought or relentless storms. Some dairies are seasonal and only in business during grass-growing months. Others are year-round, milking cows to ensure a steadier supply 365 days a year. These farms continue to serve the community even when no pasture or forage is available except hay. What then?

What to Look For …

In such situations, supplementing the cows with certified organic or high-quality feed is a must to ensure the health of the cows. It also safeguards the quality of the meat and milk they provide the community. If the rations are primarily grain, they should be around 2-4 pounds per cow per day and no more. Some farmers also supplement with alfalfa hay, cube, or similar form. Again, any supplements should ideally be equal to or better than certified organic.

Other supplements are often appropriate or actually necessary, such as North American (NOAM) kelp and other mineral supplements. It’s a good idea to make sure your farmer isn’t using Pacific kelp because of the radiation that continues to contaminate due to the Fukushima disaster. The need for these supplements depends on the farm’s pasture quality, location, and production model. If a farmer charges a bit more in order to purchase high-quality inputs, it is well worth it for the increased quality of the dairy and cheese they will provide.

One interesting factoid in conclusion. Cheese happens to be the most stolen item in the world. Clearly, healthy cheese is considered a very much in demand product the world over!

I hope this guide will help you when asking questions from your raw milk cheese supplier. Any others you would add to the list? 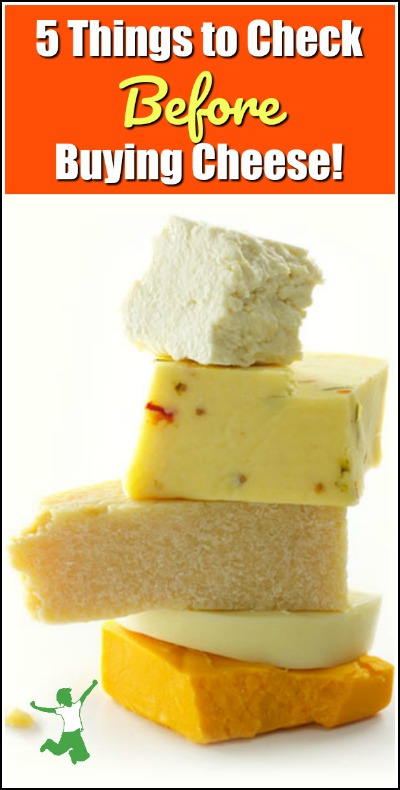 How to Make Raw Butter (+ VIDEO)