“Raw” Cheese from the Store is NOT RAW! 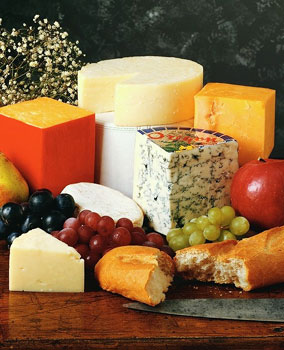 In yet another case of labeling tricks and deception where store bought food is concerned, many brands of raw cheese produced in the United States and sold at the healthfood store and specialty shops are anything but.

Organic Valley, the corporate behemoth that has gone to the Dark Side where raw, fresh, organic, healthgiving grassfed milk is concerned is not surprisingly the worst offender of this loophole in the USDA regulations.

“If the cheese is labeled as pasteurized, the milk shall be pasteurized by subjecting every particle of milk to a minimum temperature of 161 degrees Fahrenheit for not less than 15 [fifteen] seconds or by any other acceptable combination of temperature and time treatment approved by the Administrator.”

It means that any cheese where the milk is heated to a temperature under 161 degrees Fahrenheit or less than 15 seconds could be called “raw” and labeled as such according to this definition!

Organic Valley admits on its website that its raw cheese is “subpasteurized”, but fails to identify just how close subpasteurized is to the real thing. This is typical marketing deception and labeling games by a company which, many months ago, I stopped buying products from.

Subpasteurization still heats the milk to an obscenely high temperature which destroys nutrition and enzymes.    Calling such a product “raw” is deceptive, misleading, if not downright insulting to the sensibilities and intelligence of its customers.

While Organic Valley is no doubt the worst offender of this regulatory loophole, any other cheese sold in stores, produced in the United States and labeled as “raw” is also likely heated to subpasteurization temperatures.   Even “raw” goat cheese would fall under this loophole.

I called the company Tree of Life which also produces “raw” cheese sold in healthfood stores, but my questions about the true rawness of their cheeses were not answered and requests for a return call from someone who could provide me with answers were not returned.

On a positive note, a very small dairy near my metro area which sells raw goat cheese in stores around town was very upfront and forthright with their answers about how the cheese is produced.  This dairy does truly produce raw cheese as the milk is only warmed to 98F which is well within the limits for enzyme and nutrient preservation.

The lesson to be learned here is that the only way to be sure that the cheese you buy comes from truly raw milk is to buy from a preferably local, small dairy farm that specializes in cheesemaking and to talk to the cheesemaker yourself. To find a small farm near you, check out the Real Milk website or contact your local Weston A. Price Foundation Chapter Leaders from around the world for their list of locally produced goods.

If you don’t have a local dairy farm near you that makes cheese, contact the Weston A. Price Foundation and order the 2010 Shopping Guide for $3 plus shipping.  This handy little brochure fits in your pocket or purse and lists many small farms across North America where you can mail order truly raw cheese.

And, whatever you do, don’t buy the fake “raw” cheese from Organic Valley!

Many thanks to Pete Kennedy, Esq. of the Farm to Consumer Legal Defense Fund for tracking down the Code of Federal Regulations (CFR) references for this article.