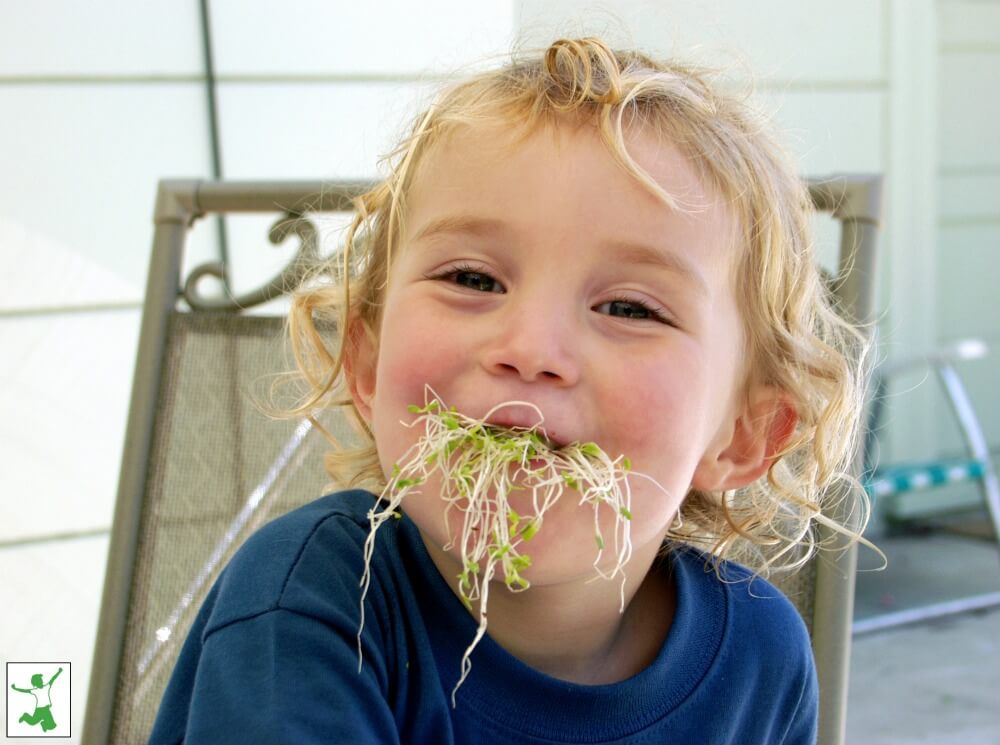 Can you name the 4th most widely grown crop in the United States? It isn’t cotton or wheat. Neither is it oats nor rice. Surprise! It is alfalfa.

Alfalfa is a semi-perennial plant in the legume family.

It has many names, the two most common are lucerne (used in the UK, Australia, New Zealand and many other countries) and Medicago sativa (medi meaning from the Medes, an ancient Iranian people where the plant was thought to have originated).

Like elderberry, one of my favorite plants, alfalfa was mentioned and used heavily by the Greeks and Romans. Pliny, Theophrastus, and many others wrote about it over 2,000 years ago in their works.

Because it is a legume, alfalfa helps restore nitrogen to the soil.

This is a very special superpower!

One reason modern farming is so hard on the soil is because many crops deplete nitrogen. In this day of mono-cropped industrialized mega-farmers, this element is added back to the soil by applying ammonia based fertilizers manufactured from fossil fuels.

A much better way for planet and people is by using cover crops and other natural means!

How Alfalfa Restores Nitrogen to the Soil

Alfalfa, like other legumes such as clovers, peas, and beans, partners with various nitrogen fixing soil microbes to replenish nitrogen that other plants use.

Our atmosphere is almost 80% nitrogen! So there is a great deal of it around, but the form is unavailable to plants. Before the advent of chemical fertilizers, how did plants get sufficient nitrogen? Compost, companion plants, and cover crops! Certain plants attract bacteria that “fix” all this nitrogen in the air and turn it into a soil stable form that other plants can then access.

A proper alfalfa crop can provide around 150- 250 pounds of nitrogen to the soil per acre! Compare that with soy, which adds only 15-60 pounds.

Another benefit? It is a deep rooted semi-perennial plant. Unlike modern crops that often barely go more than a foot below the soil, alfalfa will send roots ten, even fifteen feet down!

All this natural tillage has innumerable benefits to the soil, such as reduced erosion, better aeration, better water infiltration and retention, increased organic matter levels, and more. Such deep roots also make alfalfa naturally drought tolerant and resistant, unlike soy, corn, and many other crops grown for animal feed. 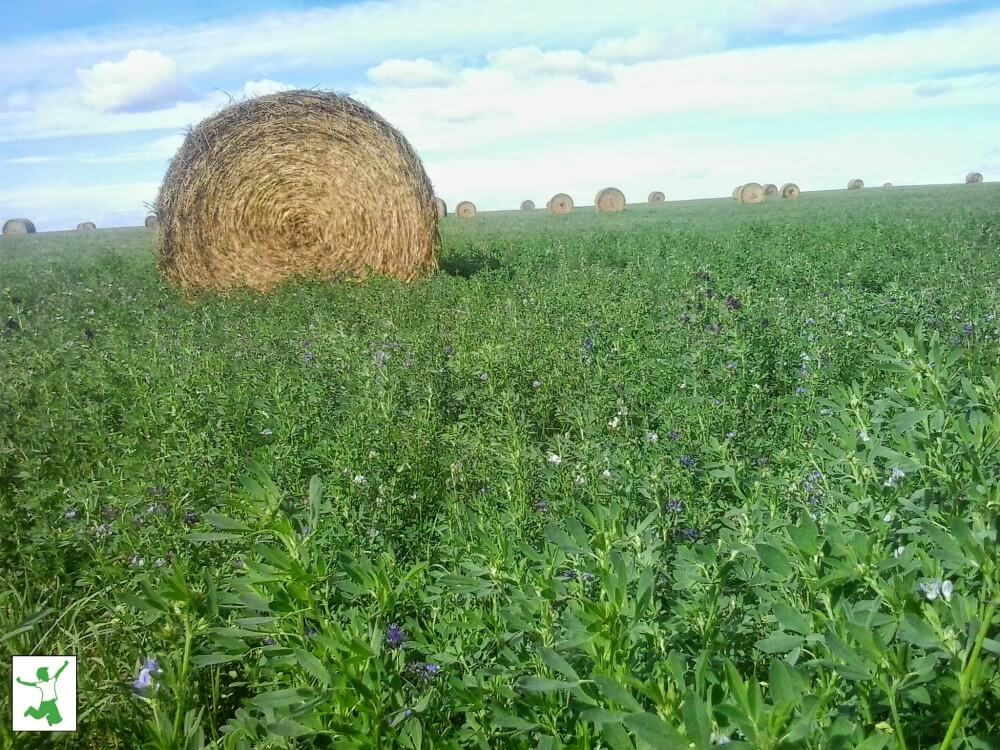 Have you heard about the “insect apocalypse?” Well, alfalfa is considered an “insectary,” a plant that provides an excellent habitat for beneficial insects to live and multiply.

If allowed to bloom, it also is an excellent food source for bees!

Animals Thrive on It

Alfalfa is great for the soil, but its original purpose was as animal forage with some referring to it as “the queen of the forages.”

Per acre, it is incredibly productive, yielding anywhere from 10-25 tons! But it isn’t just amount that matters, it is quality too, and alfalfa provides both!

One of the most important characteristics of alfalfa is it’s high nutritional quality as animal feed. Alfalfa contains between 15% to 22% crude protein as well as high amounts of vitamins and minerals. More specifically, alfalfa contains vitamins A, D, E, K, U, C, B1, B2, B6, B12, Niacin, Panthothanic acid, Inocitole, Biotin, and Folic acid (sic). Alfalfa also contains the following minerals: Phosphorus, Calcium, Potassium, Sodium, Chlorine, Sulfur, Magnesium, Copper, Manganese, Iron, Cobalt, Boron, and Molybdenum and trace elements such as Nickel, Lead, Strontium and Palladium. (1)

Alfalfa’s high protein content – pasture generally runs about 8-12% – is of special interest and importance, especially for getting animals away from and off soy. For this reason, pastured farms typically rely on it heavily!

At the same time, like a number of other forages, farmers offering it to animals need to take care that it doesn’t cause a condition known as bloat. This occurs when excessive gas builds up in the rumen of animals as they ferment down lush, green, legume feeds in the spring.

For farmers, this forage is a crop upon which animals can directly graze. However, it is also a very important hay and silage crop for providing high quality winter feed, especially for dairy animals. For pasture based farms, alfalfa is an important plant, along with clovers and similar legumes, to keep pastures and animals healthy.

Many animal feed mixes, such as for rabbits, also make use of dried alfalfa as well. The alfalfa is dried, chopped, and compressed into blocks, sometimes of pure alfalfa, sometimes with other ingredients.

With such products, the big concern is generally not the alfalfa (especially if it is organic), but the other additives and feed ingredients they contain, especially GMO corn and soy.

So when purchasing any product for your animals, just like food for your family, make sure you read the label carefully!

So, alfalfa is good for the soil and good for animals. What about for us?

Alfalfa sprouts are a popular health food. Indeed, it appears alfalfa has some history of use as an herb and food, especially in South Indian cuisine. It also has a fairly long history in Ayurvedic medicine and Traditional Chinese Medicine (TCM).

Alfalfa may help lower blood sugar, and it blocks the absorption of cholesterol in the gut, beneficial for those trying to normalize their levels. (2)

One study found that it may improve levels of “good” HDL cholesterol in the body. (3)

Consumed for quite a long time in a number of countries and cultures, alfalfa sprouts are one of the most common ways people consume this plant.

Like with sprouting any seed, the process is simple, especially if you own a few small sprouting trays.

Similar to alfalfa meal or pellets for animals, alfalfa tablets for people are dried, compressed alfalfa.

They contain the rich nutrient load and high levels of plant protein. They are available in certified organic, which is the only kind I would take of any alfalfa product now that GMO alfalfa is now widely available. More on this below.

Note that alfalfa supplements are not recommended during pregnancy or breastfeeding. (4)

Like many herbs, alfalfa is often used by itself or in combination with other ingredients to make tea.

Alfalfa tea has a long history of use to help restore appetite, provide nutrients to those recovering from certain illnesses and diseases, help relieve symptoms of menopause, and more.

There are many other conditions the tea is claimed to help. However, there is little research currently to support them all. (5)

Bees love to forage alfalfa and make a honey specifically from its flowers. Especially in Europe, bee keepers have practiced the art of single species honey for many centuries.

These honies offer unique flavors and properties. The honey produced from alfalfa is generally lighter in color and slightly less sweet than some other types, while having an almost neutral flavor. It also tends to crystallize faster because of its higher glucose content.

While many claims are made about alfalfa honey, such as helping with PMS and other issues, few have any research to back them up. This honey is shown, however, to help bolster populations of good gut bacteria. (6)

Otherwise, it is a honey that shares the many benefits of all properly produced raw honies.

While alfalfa is pretty amazing overall, it does have a few concerns to be aware of.

Sprouting converts the canavanine into other amino acids, so take care to prepare them properly and avoid consuming in excess.

Second, alfalfa is a plant that is high in phytoestrogens. Alfalfa is so high in these hormone mimickers, in fact, that overuse can result in reduced fertility in animals such as sheep and cows. (8)

Others warn that regular or excess consumption can interfere with hormones, especially in those who already are having problems.

Since alfalfa is high in vitamin K, it can cause problems for those on blood thinning medications such as Warfarin (Coumadin). For those on supplemental hormones or birth control, the high phytoestrogen content is also a potential concern. (9)

Like any good thing, industrialized agriculture (aka, “Big Ag”) can’t wait to get its fingers on it and ruin it.

Thus, with alfalfa, it is no surprise there are genetically modified varieties made to withstand the horrible chemical stew that is now used to grow so much animal and people food in the US.

The good news, unlike corn and soy, where almost all that is cultivated is GMO, farmers haven’t jumped on the industrial bandwagon for alfalfa.

According to 2013 USDA farmer surveys, only about 13.5 percent of harvested alfalfa acreage in the United States is genetically modified, compared to more than 90 percent of corn, soybeans, cotton, canola and sugar beets. (10)

Farmers have been slower to adopt genetically engineered versions partly because it’s a perennial crop that stays in the ground for roughly five years according to Dan Putnam, an alfalfa extension specialist at the University of California-Davis. (11)

Unfortunately, many experts predict that eventually, GMO alfalfa will account for as much as half of all production in the US.

Hopefully with the growing number of multi-million dollar judgments against Roundup and Bayer (the company that merged with/bought out Monsanto), more farmers will grow food, including alfalfa, independent from these massive companies and their toxic products.

EMFs in the Car. Safest Options for Phone, Music & Podcasts While Driving (I tested them all!)