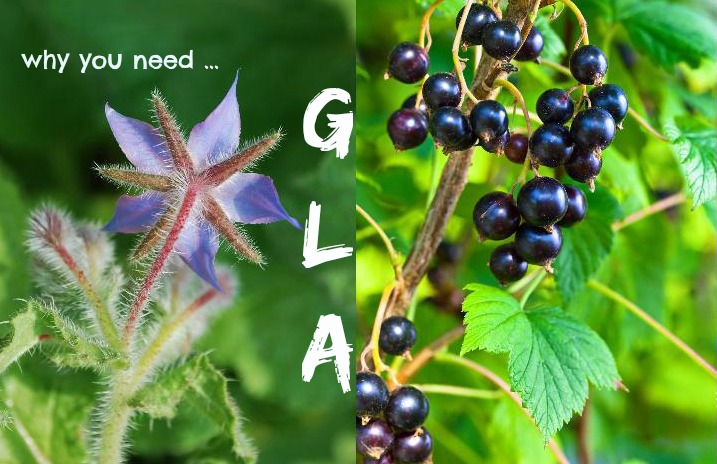 Most people today, health buffs or not, are deficient in gamma linolenic acid, a critical omega-6 fat that is frequently overlooked particularly by those seeking to lose weight and reduce inflammation.

While other healthy lipids such as weight loss boosting coconut oil and muscle-building conjugated linoleic acid (CLA) get all the headlines and attention, gamma linolenic acid (GLA) gets little to no kudos and yet is just as vitally important!

Even more ironic is that a hallmark of the Western Diet is excessive consumption of omega-6 polyunsaturated fats usually in the form of processed foods cooked or fried in cheap, rancid and frequently genetically modified (GMO) vegetable oils. Even when the sources of these omega-6 fats are whole foods, however, moderate to severe deficiencies of gamma linolenic acid persists even among the seemingly healthy.

The imbalanced intake of fats in the modern diet contributes greatly to the development of a wide variety of inflammatory conditions, weight gain, and overall ill health. Most of the chronic diseases of today, including cancer, diabetes, heart disease, arthritis, Alzheimer’s disease, etc. have an inflammatory component.

This is because the frequently overlooked anti-inflammatory properties of gamma linolenic acid have a very important role to play in human health beyond what omega-3 fats have to offer.

What’s more, a nutrient-rich diet that carefully maintains an ideal 1:1 ratio of omega-3 fats to omega-6 fats like ancestral cultures won’t remedy this situation on its own.

What is Gamma Linolenic Acid (GLA)?

In a normal metabolic situation, gamma linolenic acid is produced by the body from the omega-6 fat linoleic acid. The enzyme delta-6-desaturase (D6D) is responsible for the conversion.

The problem is that most people today are experiencing far from a normal metabolic situation!

As mentioned earlier, linoleic acid (LA) or omega-6 polyunsaturated fats are consumed to excess in most people’s diets. Despite this, a deficiency of GLA can easily occur if the D6D enzyme conversion is inefficient of nonexistent.

As it turns out, this happens quite frequently as discussed below.

Conditions Under Which GLA Deficiency Occurs

A number of factors can easily inhibit the body’s conversion of linoleic acid (LA) to gamma linolenic acid even when plenty of LA is present in the diet. These conditions include:

As if this list wasn’t enough to include nearly everyone today, there are those who are genetically unable to make the conversion. These individuals are called “obligate carnivores” by researchers. Usually, these individuals have ancestors who consumed lots of preformed D6D metabolites in the form of organ meats and fish.

Societies following a carnivore diet such as the Eskimos or Maasai would be populations particularly prone to GLA deficiency due to hereditary factors.

Gamma linolenic acid deficiency is far more common than believed today. Unfortunately, it is one of the last things practitioners consider or test for when any of the problems below manifest:

I can attest to the wonders of resolving a gamma linolenic deficiency when nothing makes sense or seems to work. All three of my children, for example, had keratosis pilaris as toddlers. Nothing helped the situation much except supplementation with gamma linolenic acid (we used borage oil capsules). Now that they are older, they no longer require it, which leads me to think that it may take some time for children to produce the D6D enzyme on their own. While I have not come across any research to this effect, certainly in my own family, early supplementation with GLA proved beneficial until early adolescence was reached. 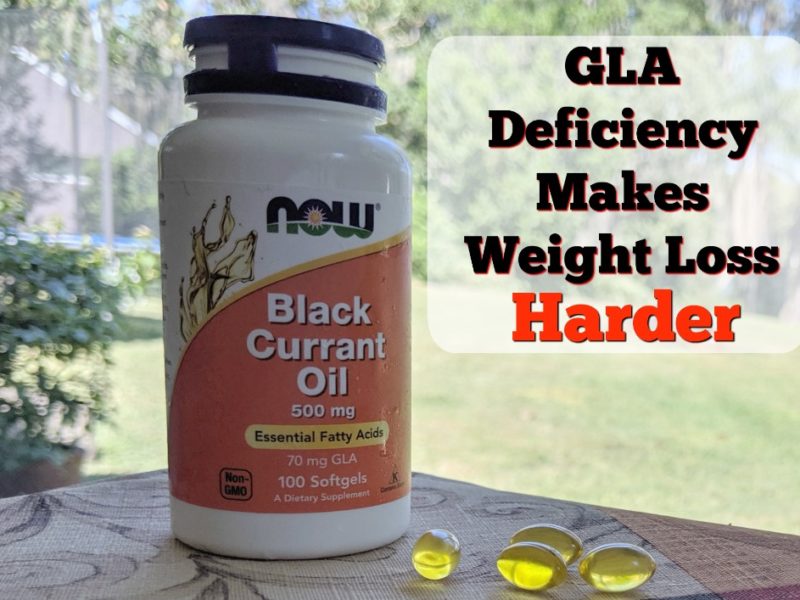 If you suspect that lack of gamma linolenic acid may be the cause of your health issues too, there are two solutions.

First, consume more organ meats such as liver, as these traditional foods contain preformed D6D to fill the gap where your body isn’t creating this enzyme itself for whatever reason. Organ meats also contain small amounts of GLA. Consumption of D6D metabolites allows your body to synthesize the GLA that you need from the likely plentiful omega-6 fats in your diet.

The second alternative is to consume gamma linolenic acid directly. Unfortunately, there are not many foods that contain preformed GLA. These seed oils contain the most as a percentage:

Which GLA Source is Best?

So which of these seed oils is best? Let’s find out by process of elimination.

I would not recommend hemp seed oil for two reasons. It is comparatively low in GLA, and there is no evidence historically that humans ever consumed this oil or valued it for health reasons. That right there is a strike-out for me.

I also would not recommend evening primrose oil as it is an estrogenic food that can cause breakthrough bleeding not associated with menstruation and contribute to precancerous breasts.

This leaves borage oil and black currant oil. We have used both in our home over the years and they have produced equally excellent results. On the positive side, borage oil contains more GLA per dose than black currant oil, so you need to take less of it to achieve a therapeutic dose. However, borage oil does cause gastrointestinal upset in some folks, so if you experience this, switch to black currant oil. These capsules are a quality source.

This brand is also excellent.

As with any whole food, take with or after a meal to minimize any digestive discomfort.

How Much GLA to Take?

The good news is that you don’t have to take much gamma linolenic acid to achieve fantastic results. In the case of my children and keratosis pilaris, half to a full 1000 mg borage oil capsule (containing 220 mg GLA) each day was plenty. Since they were young and didn’t easily swallow pills yet, I would just slice open a capsule of borage oil with a knife and squeeze the oil onto a spoon. The oil has a mild taste, so it was well tolerated and easy to swallow.

For older children and adults, the recommended dose of GLA ranges from 300 up to 2,000 milligrams per day for severe deficiency states. In most cases, taking a couple of capsules for a total of about 300 mg GLA per day is sufficient. A split dosage with half in the morning and half in the evening produces the best results. Dr. Weil MD suggests a split dose of 500 mg morning and evening (this would be about 2 capsules morning and another 2 in the evening). He says to expect 6-8 weeks to see results particularly if you are taking GLA to resolve hair, skin, or nail problems (1).

According to the Penn State University Hershey Medical Center, speak with your practitioner to be sure of your individual dosage, and do not exceed 3000 mg/day (2).

While coconut oil and CLA tend to get all the attention as the healthy fats that help weight loss and boost muscle mass, the truth is that gamma linolenic acid is a player too!

GLA works to trigger fat flushing by boosting the metabolism in a very unique way. The process involves stimulation of “brown fat” which increases energy expenditure. This is the type of fat that is usually dormant in overweight people.

Brown fat is also more prevalent in young people and women (this is our secret weapon ladies!). Women with a lower body-mass index tend to have higher levels of metabolically active brown fat.

Human fat consists of white and brown adipose tissue. Most fat is energy-storing white fat, however, even small amounts of brown fat can help induce weight loss through an increase in energy expenditure. The darker color that characterizes brown fat is due to the greater number of mitochondria, which if you remember from high school biology, is the “powerhouse” of the cell. While white fat is the kind that you see on your waistline, thighs and other parts of the body, brown fat is hidden from view. It is located by the organs where it provides padding and protection. It is also safeguards areas surrounding the neck and spine.

Harness the Power of Brown Fat

Here’s how you can harness the power of brown fat to help you lose weight faster according to Ann Louise Gittleman, author of Eat Fat, Lose Weight:

Activating brown adipose tissue—which may amount to as much as 30 to 40 percent of total body mass in some people—can make the battle of the bulge considerably easier. The good news is we don’t have to wait for Big Pharma to develop a drug to stimulate this kind of weight loss.

Back in the 1980s, researchers at the University of Montreal found that gamma-linolenic acid (GLA) is a safe, natural way to stimulate brown fat activity and burn calories. Even people who had been unable to lose weight with other methods lost on average a pound a week with brown-fat burning GLA.

Thanks to the pioneering research of the late David Horrobin, we now know that omega-6-rich GLA also fights inflammatory diseases like arthritis, helps relieve PMS, and is terrific for your skin (2).

Are you frustrated by attempts at using healthy fats to heal with mixed results? If so, it is possible that gamma linolenic acid is an important and missing piece of the puzzle. Note that it takes 3-6 weeks of supplementation to notice the full benefits. Add this crucial fatty acid to your diet and see if you discover, like I was shocked to see, that I was actually deficient despite a healthy traditional diet.

The Five Healthiest and Best Substitutes for Butter

How Vegetable Oils Make Us Fat