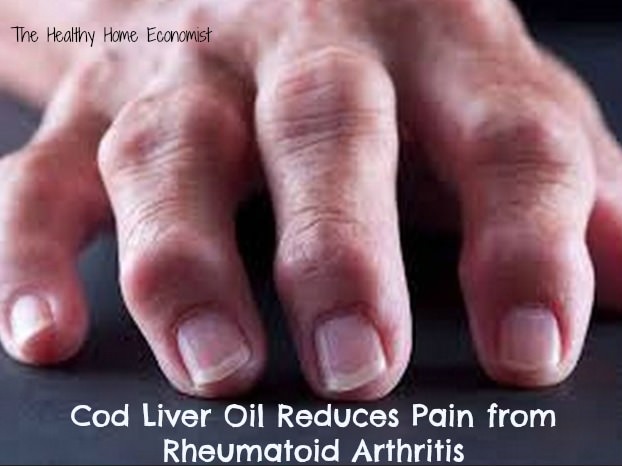 Rheumatoid Arthritis can be an extremely painful not to mention disabling illness. As a result, those suffering from this autoimmune disease frequently find themselves relying on non-steroidal anti-inflammatory drugs (NSAIDs) such as Voltaren (diclofenac sodium) for relief in order to function on a daily basis.

Consequently, limiting NSAID use and minimizing dosage as much as possible are very important goals in the management of Rheumatoid Arthritis.

The good news is that results of a recent study suggest that it is indeed possible to reduce dependence on NSAIDs for Rheumatoid Arthritis with the help of the age-old remedy cod liver oil.

The pilot study, reported in the Journal of Clinical and Diagnostic Research in July 2013 involved 30 Rheumatoid Arthritis patients aged 19 to 60 years. The study was conducted from April to September 2012 at Mahatma Gandhi Medical College and Hospital.

Each patient received 1.5 grams of cod liver oil twice each day given as five, 300 mg capsules. The cod liver oil regimen continued for a period of 24 weeks.

Note that while helpful, the benefits of krill oil do not outweigh those of cod liver oil. Hence, it is not an adequate substitute.

Cod liver oil was chosen by the study’s authors over plain fish oil as cod liver oil contains Vitamins A and D, which fish oil does not. Vitamin A protects against liver damage from Methotrexate therapy, a mainstay in the treatment of Rheumatoid Arthritis. Cod liver oil is also protective against Vitamin D deficiency which is highly prevalent in the disease.

In addition to the cod liver oil, the patients took 50 mg of Diclofenac Sodium in a single daily dose with the maximum allowed NSAID dose of 200 mg/day.

The average daily NSAID requirement for each patient was recorded and compared throughout the 24 week period. In addition, the pain score of the patients was evaluated using the Visual Analogue Scale (VAS) at different weeks along with an assessment of the “Subjective Response” to their Rheumatoid Arthritis pain.

Administration of the cod liver oil over the 24 week period resulted in a statistically significant decrease in the mean VAS pain score from 80.38 ± 6.4 at the beginning of the study to 67.30 ± 5.3 at its conclusion.

Even more encouraging, the percentage of patients who experienced a subjective response assessment of “Better” increased dramatically from 15.38% at week 4 to 61.53% at week 24.

The authors of the study concluded the following:

This study revealed that the concurrent use of Cod liver oil which contained n-3 Essential Fatty Acid in Rheumatoid Arthritis patients reduced the mean daily dose of Diclofenac Sodium consumed and probably the incidence of the side effects which were associated with it.

Given that cod liver oil is a safe remedy used for centuries, even as far back as Viking and Roman times, it would seem reasonable to try it for 5-6 months as the patients did in this study to see whether it could reduce dependence on dangerous NSAID drugs for Rheumatoid Arthritis pain.

The concomitant consumption of cod liver oil causes a reduction in the daily diclofenac sodium usage in rheumatoid arthritis patients: a pilot study

Is Your Healthcare Provider Best, Good or to be Avoided?
Next Post: Easy Homemade Quiche Recipe (made with veggie leftovers!)

The recent article on the best type of kefir starter generated a lot of questions about how to activate and otherwise care for live kefir grains. It is clear that…