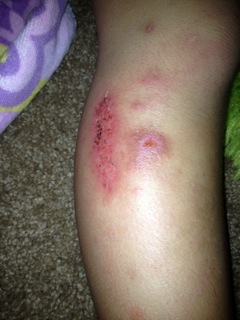 My friend Kelli’s youngest child is a little girl adopted from China. Kelli and her husband have 3 older children of their own, but since Sarah is their first child from another country, they have occasionally experienced challenges and adjustments based on the inherent cultural and genetic differences.

One such challenge is Sarah’s extreme reaction to mosquito bites which apparently is not uncommon for those of Chinese heritage. As such, using an effective natural mosquito repellent is important, but doesn’t always work in every situation.

Living in Florida and being very sensitive to mosquito bites can pose a challenge. Mosquitoes can be a year-round problem particularly if the winter is rather warm as it has been so far this season. Even with spraying by mosquito control, getting nasty bites is a common occurrence.

Telling a young child not to scratch is a losing battle most of the time! Unfortunately, Kelli did not find any of the Western style remedies for mosquito bites to work very well for Sarah.

As a result, just a few mosquito bites could send Sarah to the doctor for examination as they would sometimes get infected from her scratching.  The picture above is of Sarah’s leg after a recent run-in with a hungry mozzie!

Besides being a busy Mom of four, Kelli is also an Adoption Specialist, so with her international connections, she was able to consult with her Chinese friends about Sarah’s problem with mosquito bites. 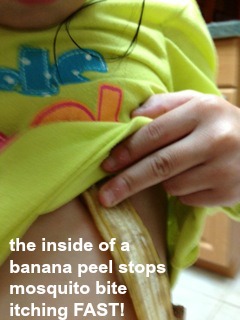 An old Chinese mosquito bite remedy that is rubbing the bites with the inside of a banana peel!

The banana peel not only worked, but it also worked FAST!

Here is Kelli’s email to me about her experience with this mosquito bite remedy:

Well, sure enough Sarah got 2 bites this evening….
They immediately began to swell and the area all around the bite was quite red, of course some of that was from her itching.
I applied the banana peel, as advised by my Chinese friends, and within 2 minutes the bite stopped itching. About 5 or 7 minutes later, the site was significantly less red. When I glanced at it again before bed, though I could still see the bite, her skin was no longer red. Best of all, she didn’t seem bothered by it.
Since she is so young it is hard for her not to scratch, and I will forward you a picture of a current bite which landed us at the doctor’s office out of fear of infection (we’re in the clear for now). She has been on antibiotics once before from a bug bite getting infected after her scratching it, and I try to avoid antibiotics so was not happy when this recent bite started looking so bad.
From now on, we will honor this Chinese remedy…I wish I had known this secret years ago!

The most interesting thing about this mosquito bite remedy to me is that it is fairly well known that eating bananas is a surefire way to be a prime mozzie target at sundown.  While eating bananas seems to attract mosquitoes, rubbing the bites with the inside of the peel heals them!

Does your child have problems with mosquito bites too?   The next time the mozzies leave their calling card on your child’s skin, skip the ammonia sticks and other chemical-based remedies that will end up in your child’s bloodstream and simply try the inside of a banana peel!

Do you know another mosquito bite remedy that works well too? We’ve often used this homemade herbal salve which is incredible for all types of skin irritations, rashes, and bites. Dabbing witch hazel on bug bites is a remedy that my Grandmother used. 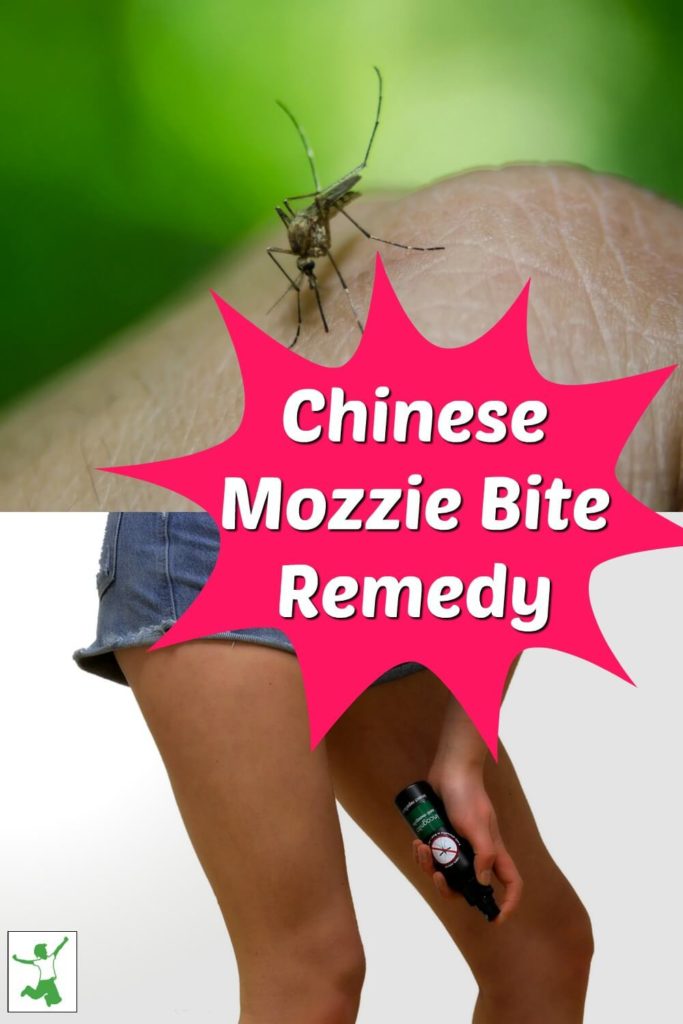 Pollen is Not The Problem

Candida Auris. How to Avoid this Fungal Superbug

Why Soil Based Probiotics are Necessary to Heal the Gut