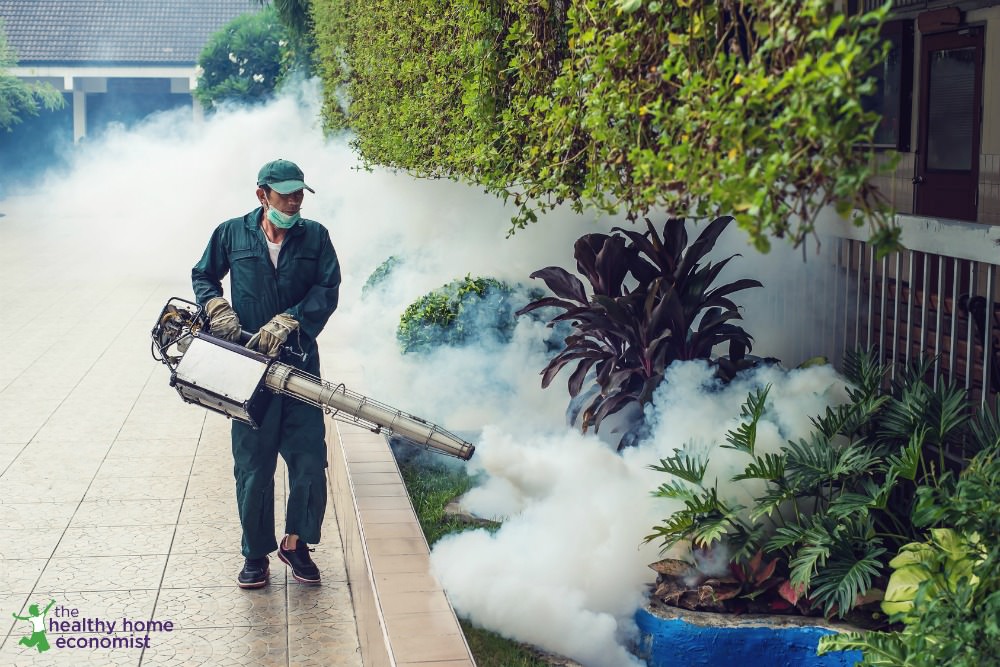 Mosquito spraying is one of the primary tools local governments use to quickly reduce the number of mosquitoes in a community. Typically, fogging efforts target the species responsible for infecting people with viruses like Zika, West Nile, dengue, or chikungunya.

Some communities implement fogging programs to reduce mosquito populations strictly to support local tourism. Fewer mosquito bites during a beachside or Disney World vacation means a higher likelihood visitors will come back for another holiday!

Mosquito control workers dispense pesticides and larvacides either on foot or via fogging trucks, planes or low flying helicopters. In a county north of where I live, orange choppers commonly use sharp maneuvers known as “AG turns” to enter and exit a treatment zone. This can be quite alarming to residents.

Many densely populated areas spray for mosquitoes, often without input or knowledge of residents.

In 2016, Florida quietly reversed 29 years of policy against aerial spraying at amusement parks. The decision was made without any opportunity for citizens to comment. (1)

Living in colder locations is no protection from the potential onslaught.

Staten Island, New York, the Canadian city of Winnipeg and many other non-tropical urban locations utilize mosquito spraying on a periodic basis as well.

Warmer locations plagued with high mosquito populations may routinely spray year round based on the number of mosquitoes inspectors find in traps, the types of mosquitoes that are proliferating, and/or landing rate counts.

The bottom line is that every community is slightly different in the implementation of local mosquito control policies. Whatever “public health” strategy is decided, residents have little to no say in its implementation.

Local governments have a  number of different mosquito fogging chemicals at their disposal when implementing a mosquito control program.

Naled is one of the most popular insecticides for this purpose. Authorities including the CDC insist that naled and other chemicals are safe. Such assurances ring hollow with a public that has heard that song and dance before. DDT used to be considered safe for mosquito spraying too.

In the mid-late 1950s, children used to run, bike or skate behind trucks fogging areas with DDT. Children thought it was fun to play in the thick fog as vehicles slowly drove around residential streets right after dinnertime. The government assured citizens DDT was safe. Schools even hung posters showing workers spraying school lunchroom food to show that there was no danger. (2)

Of course, DDT was perfectly safe, until it suddenly wasn’t. The chemical was banned in 1972 by the EPA due to the health risks to humans, wildlife and the environment.

Naled: Safe or Not?

Naled has by and large taken the place of DDT for mosquito control purposes. According to the CDC, the chemical is safe based on a decades-long history of use. (3)

When applied according to label instructions, EPA does not expect the use of naled for public health mosquito control to raise a human health concern. People are unlikely to breathe in amounts large enough or touch anything with enough insecticide on it to harm them. However, anyone who is concerned because of an existing health problem should talk to their doctor. Also, people who tend to be sensitive to chemicals in general, including household chemicals, could experience short-term effects, such as skin, eye, and nose irritation. Contact your local mosquito control program to get specific information on spraying in your area.

Scientific research to date indicates that naled is low toxicity as well. The Journal of the American Mosquito Control Association published results of a study in 2008 which concluded that “data suggest that aerial spraying of naled does not result in increased levels of naled in humans, provided the naled is used according to label instructions”. (5)

While naled is commonly used for mosquito spraying, a number of other pesticides are popular as well. What is used depends on mosquito resistance and other factors.

Common choices are Etofenprox (brand name Zanivex) and permethrin (brand names such as Scourge and Anvil). Manufacturers of both insecticides claim low toxicity to birds. Once the spray has dried, the chemicals are apparently harmless to bats, bees and pets too. (6)

Most local governments utilize a blend of insecticides and/or larvacides that are situation specific. Hence, a fogging truck may spray one set of chemicals during one season of the year and another after a heavy rain event. To find out what is sprayed in your area, you must contact the mosquito control authorities in your community.

The synergistic toxicity of blended chemicals is one of the most concerning health risks of mosquito spraying. This is because manufacturers and/or governments almost never test the biological effects of chemical cocktails. Thus, residents end up being guinea pigs just like back in the DDT spraying days.

Protecting Yourself from Aerial and Ground Mosquito Fogging

Ultimately, if your local authorities decide to implement a mosquito spraying program either on foot, truck or aerially, there is little to nothing you can do about it.

With that in mind, there are certainly a number of things you can do to minimize any long term health effects. Here are some for your consideration.

Live as Far Away from the Road as Possible

If you are in the market for a new house, condo or apartment, try to find one that is located as far off the street as possible. 300 feet (100 yards) or more is ideal.

In some places, fogging trucks do not spray in gated communities as they can’t easily get access. Living in an exclusive community doesn’t put you in the clear, however. Wealthier homeowners may install automatic mosquito foggers themselves around pools, porches, and decks. This puts neighbors in close proximity potentially at risk.

Of course, if aerial spraying occurs in your area, living away from the street won’t do much good!

A very important step to protecting yourself is knowing exactly when spraying is to occur. To obtain this information, you must contact local mosquito control in your area. If there isn’t any such department, you are in the clear. If such a program exists, find out as much detail about local spraying efforts as you can.

Most local mosquito control programs offer a way for residents to be contacted before spraying occurs in their area.

Usually, contact via email or a voice recorded message to your phone number gives you a 24-48 hour heads up that spraying is due to occur in your neighborhood.

It goes without saying that doors and windows (including the garage) should be closed during spraying. Usually, spraying occurs at night when mosquitoes are at their peak activity. You may need to resign yourself to using the A/C or fans on those nights if outdoor temperatures are warm.

I would suggest keeping doors and windows closed at least for the first few hours after sunrise the following day too. Naled, for example, breaks down rapidly with exposure to sunlight.

Bring your pets indoors on nights when spraying is to occur. Walk the dog before sundown as the trucks usually start their route about 9 pm and finish after midnight. If you have chickens, beehives or other outdoor animals, keep them in the backyard. Cover ornamental fishponds.

If you grow your own produce, cover the area on nights when spraying occurs. Follow the same process for nights when a frost is expected.

It goes without saying to keep children indoors during spraying times. It is best to avoid jogging, walking or biking in the neighborhood after dinnertime too when spraying is on the schedule.

In addition, skipping outdoor recreation the morning after spraying is a good idea too. This gives ample time for the pesticides to come into contact with sunlight which dries and/or degrades them rapidly.

Getting Rid of Mosquitoes Without Chemicals

If you are considering fogging equipment for your home, I would suggest taking a look at another method. And no, it doesn’t involve planting citronella all around your house!

While these devices only trap adult mosquitoes, within a few weeks, the life cycle of mozzies in the immediate area is broken, resulting in a drastic reduction in the number near your home. We’ve used one since getting deluged by Hurricane Irma, and we’ve been able to sit out year round since then despite the many lakes and swamps in our community.