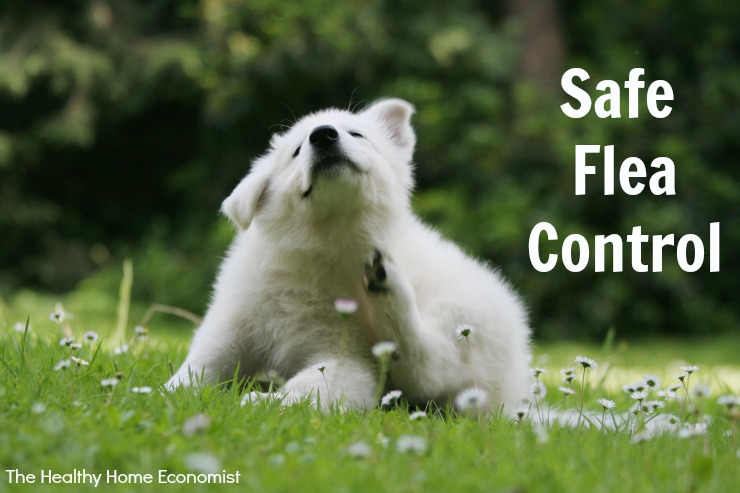 Resolving a flea infestation in your home with natural, nontoxic methods is a fairly simple and straightforward process. Preventing and controlling fleas directly on your pet is another matter entirely. The difficulties of successful flea control for cats and dogs on a consistent basis is why most people resort to the direct application of pesticides or oral flea medications.

Don’t be fooled, however. These products are not safe for your pet or for you and your children. No matter what your vet might tell you, the use of nontoxic methods of flea control is a safer route over the long-term.

A quick tour around the internet demonstrates just how common serious reactions to conventional flea products truly are. Emergency trips to the vet, convulsions, staggering, lethargy, vomiting, seizures and even death are not uncommon. Thousands of pet deaths have been reported from pyrethroid containing flea products alone (1). Believe it or not, these same insecticides are used on cotton crops, fruits, and lettuces that are polluting waterways.

According to the National Resources Defense Council (NRDC), cat flea collars contain some of the most dangerous insecticides, including tetrachlorvinphos, carbaryl, and propoxur. Some of the collars posing the greatest risk are already being phased out of production. The NRDC is suing the EPA to ban the rest (2).

What about the flea and tick sprays and drops that you apply at the nape of a dog or cat’s neck? These products are incredibly popular and also incredibly toxic. Here is a rundown of the insecticides used (3, 4):

What about Oral Flea Meds?

Oral medications to control fleas are safer than externally used pesticides. This is because they don’t expose pet owners to carcinogenic and/or allergy-triggering residues. However, from your furry friend’s perspective, they aren’t much better.

There are three drugs in the category of oral flea and tick preventives: Nexgard, Bravecto, and Simparica.

Dosing is once a month with a soft chew for Nexgard and Simparica and once every three months for Bravecto. Side effects for these drugs are scary with deaths reported as well. The details can be found on veterinarian Dr. Elizabeth Carney’s website, where she provides the full Adverse Drug Event reports. Due to the seriousness of these side effects, Dr. Carney does not use these medications on her own pets nor does she prescribe them for her patients.

I would agree with Dr. Carney. Not on my pets, thank you very much!

There are a number of products on the market that use natural essential oils (EOs) to repel or kill fleas, ticks, and mosquitoes. Dr. GreenPet and Sentry offer popular sprays or drops using therapeutic grade essential oils diluted to safe levels.

Dr. Richard Palmquist, Chief of Integrative Health Services at Centinela Animal Hospital, Inglewood California, speaks glowingly of the use of EOs for pet health with a few cautions (4).

Since animals metabolize and react differently to essential oils, it is important to know about species-specific differences before using oils. One problem we see in our clinic involves people overusing oils. A person discovers essential oils and begins to diffuse the oils into their homes leading to an unintentional overdose for their pets. Lavender oil is highly useful, but it contains no antioxidant compounds and can therefore oxidize as it is stored. These oxidized alcohols can aggravate patients and lead to the development of allergic responses.

Some essential oils can cause liver and kidney toxicity in sensitive species. Cats use a different system in their liver to detoxify and are particularly sensitive to essential oils that contain polyphenolic compounds. These are so-called “hot” oils like cinnamon, oreganol, clove, wintergreen, thyme and birch, which are oils that should be avoided in cats. Cats should not receive melaleuca oil, and never put essential oils into the ear canal as they can damage cats’ delicate ear drums and nerves. Care is needed around eyes as well. Always wash your hands after handling oils to prevent accidentally getting them into your eyes.

Dr. Palmquist recommends using an essential oil or combination for no more than two weeks. This period of rest reduces the chance of pet sensitivities developing.

Vitamins and herbs sprinkled on a pet’s food to repel fleas is another natural method to consider. The ingredients of these supplements vary quite a bit.

For example, the Flea Free Pet Supplement contains primarily vinegar (28%) as the active ingredient with smaller amounts of garlic (3%), citrus (2%) and herbs (2%).

Mercola Flea and Tick Repellent utilizes herbs as the active ingredients. Others use garlic and the B vitamins in Brewers yeast taken internally as the primary repellent.

The primary problem with food-based supplementation to control fleas is acceptability. Many finicky cats, for example, would turn up their noses at food sprinkled with vinegar or a garlic based powder. Even if acceptance is gained, these foods and herbs, while nontoxic, are not a natural part of a dog or cat’s diet. Hence, sensitivities or other problems could develop with a pet consuming them over a long period of time.

What to do given that the use of essential oils and oral nutrients are not ideal as a long-term solution?

I have found that a simple dusting of your pets once every week or two with food-grade diatomaceous earth does the trick with no side effects. Diatomaceous earth works by scratching the exoskeleton of fleas and other insects hiding in the fur. This causes slow dehydration and eventually death. In essence, diatomaceous earth acts as a non-toxic flea powder. It is used basically the same way without all the chemicals. It is completely safe for animals and humans.

Make sure you get only food-grade DE, however, as some of it will likely be ingested by your pet. This is especially true with cats as they groom themselves frequently. The small amount that a pet ingests has the bonus of neutralizing any parasites internally. Incidentally, a small amount of food-grade diatomaceous earth taken internally is effective for deworming children and adults too.

Another word of caution. Do not use the genetically engineered insecticide dust called CimeXa to control fleas on your pets. While it is a good product for insect control around the home as it is many times more effective than diatomaceous earth, it is not known if it is safe for ingestion.

Video of How to Dust a Pet with DE

The short video below shows my husband giving a quick dusting to one of our indoor/outdoor cats. I suggest using a large box to dust which keeps the pet in one spot while you get them covered thoroughly. Be careful around the eye and nose areas. Coverage doesn’t have to be perfectly uniform as the oils in the fur will carry the DE throughout the coat within a day or so. After dusting, let them outside quickly so they can shake themselves off. Enough will remain in the coat to be effective. We dust right by the back door on a tile floor for easy clean-ups.

Some sources suggest gloves and a mask before using diatomaceous earth, but we have not found this to be necessary in the 20+ years we’ve used it around the home. Just wash your hands immediately after handling and vacuum up any spills. Our animals have not experienced any health issues from repeated dustings either. In fact, DE helps keep mites and other parasites off our backyard chickens too.

If you don’t like to get DE on your hands, you can use a pest pistol duster instead. This handy gadget costs just a few dollars and will effectively dust your pet without you having to touch the diatomaceous earth at all. We have a pest pistol too, which is what I use to dust the pets and dust the chicken coop. My husband prefers to just use his hands. Your choice as to what method appeals the most. They both work great.

Tip: If you choose to use a pest pistol for applying DE to your pet, I would recommend dusting your pets outside. The dust is a bit more difficult to contain when using the pistol in my opinion.