You are here: Home / Healthy Living / Depression: Your Brain on Sugar

The physiological reasons why sugar and refined carbs contribute to depression and greatly influence whether a person can recover from it without a dependence on medications over the long term. 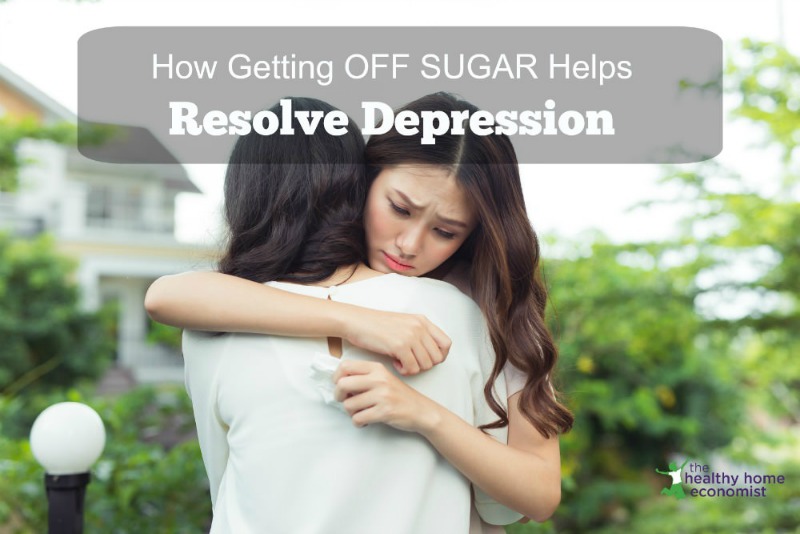 You’ve no doubt seen the television ads warning “this is your brain on drugs”. These public service announcements are designed to be visually shocking thereby discouraging youth drug abuse by comparing the brain to an egg and a fried egg in a pan to a brain on drugs.

The same can be said about the effects of sugar on the brain. In the case of sugar, however, the effects are marked by a high risk of long term mental illness like depression rather than a brief yet dangerous, drug-induced high.

Depression is at epidemic proportions in our modern society. Even children are not immune with some estimates putting 1 in every 8 teenagers as clinically depressed.

What’s more, major depression is projected to become the #2 disability in the United States by 2020 with 1/4 of the population suffering its devastating impact sometime during their lives.

Are Antidepressant Drugs the Answer?

When the sobering diagnosis of depression is given, the typical remedy given by doctors is a script for antidepressant drugs.

According to Nora Gedgaudas, author of Primal Body Primal Mind, antidepressant drugs only have about a 13% effectiveness rate, just slightly better than a placebo.

Moreover, for the small minority of people for whom antidepressants actually help, 30-40% of them will not find antidepressant drugs effective over the long term.

Bottom line?  If you are depressed, don’t look to drugs as the long term solution especially if you want to maintain a normal sex life. Antidepressants are well known to significantly dampen or even completely eliminate libido!

Instead of drugs, look to your diet as the best long term solution to depression.

Diet has a tremendous impact on the development of depression and whether or not the sufferer successfully recovers long term. For some unknown reason, however, this basic truth is consistently ignored by most conventional medical authorities other than the possible suggestion of a doctor’s office recommended supplement of industrialized fish oil capsules!

Imbalanced, unstable, surging blood sugar is a common source of depression as well as simple irritability and violent tendencies according to Ms. Gedguadas, a board-certified Nutritional Therapist and Clinical Neurofeedback Specialist.

Consider that Alzheimer’s patients are notorious for having a voracious sweet tooth.  Eating sweets on a frequent basis with the accompanying blood sugar surges depletes magnesium in the body at a rapid rate leaving the brain vulnerable to the ravages of aluminum.

A high aluminum level in the brain is, of course, a hallmark symptom of Alzheimer’s Disease.

How Sugar Destabilizes the Brain

Blood sugar surges actually destabilize the brain via the deadly process of glycation.

In layman’s terms, glycation is the chemical process in the body whereby glucose, proteins, and certain fats become tangled together making all manner of body tissue stiff and inflexible – including the brain.

Absolutely nothing is more destabilizing to the brain than surging blood sugar which results in rampant glycation in the body.

Case in point: Have you ever noticed how your temper gets really short after that mid-afternoon candy bar?   Similarly, this is why kids get so moody and disruptive when a teacher ironically and misguidedly gives them candy as a reward for good attention.

Ms. Gedgaudas maintains that blood sugar issues are the #1 influencing factor in mental health with depression being one of the most prominent.

Avoiding the devastating effects of glycation upon the brain which can over the long haul, cause mental illness like depression, anxiety, and other mood disorders requires stable, steady blood sugar as much as possible.

While surging blood sugar levels caused by overconsumption of grain-based foods, processed sugars, and even alcohol in the diet are the most destabilizing force the brain can experience, natural dietary fats are conversely the most stabilizing neurological force giving way to clear thinking and stable emotions.

The best dietary fats for blood sugar control are those consumed liberally by Traditional Societies which experienced vibrant health and suffered little to no mental illness or degenerative disease.  These are the very same fats that are typically shunned by most people in favor of factory fats like margarine which are not favorable to brain function and should be avoided.

Traditional fats must be consumed liberally in the diet to achieve mental stability, however.

Think about the makeup of the brain if this point is concerning to you in any way.  Consider that 60-80% of the brain is fat, a full 50% of which is saturated fat!

11% of the brain is arachidonic acid best found in egg yolks and 25% as DHA (an omega-3 fat best found in oily fish. Flax oil is a poor substitute as it converts poorly to true DHA).

How much of the brain under healthy, normal circumstances is actually composed of highly processed, polyunsaturated fats which are the primary fat in the Western diet?

If you want to adopt the wise and time tested strategy of eating properly for your brain’s sake, then you must eat the type of fats that actually comprise the make-up of the brain. Doesn’t this just make sense?

These fats are the ones to seek and consume liberally if you wish to put depression behind you for good.

For more details on the healthiest fats to consume and the ones you absolutely can’t do without if you want peak mental fitness, please see the article Five Fats You MUST Have in Your Kitchen.

Stop the sugar!  Save your brain .. and possibly even your life!

Why You Should Be Eating Grains
Next Post: Natto Fried Rice: Nutrient Dense Meal on the Cheap

The independent, peer-reviewed Journal of the American College of Cardiology publishes a comprehensive meta-analysis of randomized trials and observational studies in June 2020 that declares saturated fat is safe and…