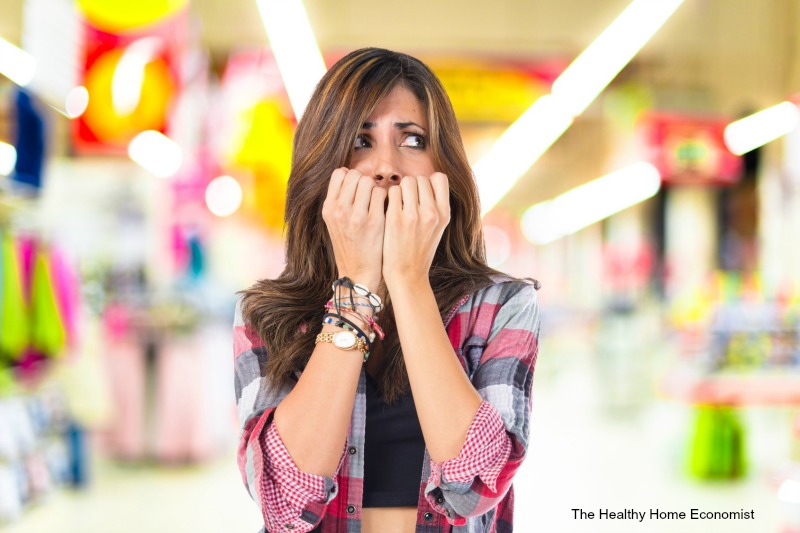 Many years ago, shortly after I turned 30, I started having panic attacks totally out of the blue. While relatively harmless in and of themselves, panic attacks make you feel like you are going to die. Racing heart, difficulty breathing, heaviness in the chest and a feeling of impending doom all close in on you and then completely disappear within the span of 10 minutes or so. Sometimes a lingering sensation of distress may hang on for hours afterward. As time went on with no end in sight to these debilitating episodes, I realized that I needed to find natural panic attack remedies to help me.

Many folks mistake a panic attack for a heart attack the first time they have one and end up in the ER. This leads to having thousands of dollars worth of tests and an overnight stay in the hospital that basically turns up nothing.  Fortunately, I knew what mine was when I had it for the first time so at least I avoided the trauma of an ER visit. Still, it was still quite a shock to deal with nonetheless.

I did get checked out by my primary care physician just to be sure nothing was wrong. He did an EKG and checked other vitals and found nothing.

At the time, I immediately and intuitively knew why I had started having these attacks. I was in a job that I didn’t enjoy, even though it was a  position that I was really good at and was financially rewarding. I was working too much and not eating well (fast food for lunch many days). Stress was out of control, My commute to and from work was insanely long in bumper to bumper traffic most of the time.

In short, I was spending most of my life doing stuff I didn’t like or want to do.

To me, the advent of regular panic attacks meant “Change Direction” in big, neon blinking lights. I needed to change my life drastically and yet I didn’t know how to do it.

It took me a couple more years before I was able to leave that job for good and start working in a much more enjoyable, less stressful and fulfilling role.

In the meantime, though, here’s how I learned to reduce and then eliminate those debilitating panic attacks for good – with no drugs.

I should probably add that drugs were never an option for me. I know a lot of folks nowadays that take drugs to stop their panic attacks. To me, this is like cutting the wire to the blinking oil light on the dashboard of your car. The light may have stopped flashing, but you are still perilously close to blowing up the engine.

A panic attack is your body telling you that something is seriously wrong. Taking a drug to cover up the symptoms doesn’t do anything but ignore the source of the problem.

If you have a problem with panic attacks and would like to stop them drug free, perhaps what I did can help you.

I had them licked within just a few months of implementing these 4 natural panic attack remedies. It did take me awhile to figure out what changes needed to be made though as I ignored the attacks for quite some time hoping they would just go away. They didn’t – they just got more frequent!

Once I took action, the attacks started occurring with less frequency until they eventually just stopped happening altogether. As of this writing, I can’t remember the last time I had a panic attack. It has certainly been over 20 years!

I figured one big reason for the panic attacks was my lousy diet. Panic attacks were my body’s way of letting me know that I was seriously nutrient deficient and needed help.

I bought a juicer and started juicing at least once a day on most days.

Note that cold-pressed vegetable juice, while unheated, is not raw. The high pressure processing destroys the probiotics. Hence it is not nearly as therapeutic as freshly pressed juices.

As it turns out, breakfast was the best meal for me to have just a glass of fresh veggie juice. My favorite combination was Cherie’s Cleansing Cocktail from Juicing for Life.

Several other juicing recipes from this book were helpful to me as well. There is no doubt that fresh vegetable juicing is a great way to get a lot of easily digestible minerals and nutrition quickly.

Ayurveda is a system of traditional medicine from India based on the 3 doshas. These physical and emotional tendencies are Vata, Pitta, and Kapha.

An Ayurvedic MD in my local area diagnosed me with a Vata imbalance, as Vata is my primary dosha and suggested lifestyle changes that would bring it back into balance.

The primary changes I made based on her suggestions were going to bed no later than 10:30pm and eating most of my meals warm and cooked. Vatas don’t thrive on cold food like salads for the most part.

I also used Vata tea which contained herbs soothing to this particular dosha and drank it whenever I felt out of kilter.

She also told me to eat more nourishing fats. This time of my life was long before I discovered the principles of traditional eating and I, of course, was making the mistake that many Westerners make of eating too few healthy, wholesome fats.

Eating more meat and full fat dairy went a long way toward balancing my physiology. More dietary fat also raised my cholesterol. My primary care MD found through a blood test that my cholesterol was around 125 at the time my panic attacks started. Of course, he thought this was fantastic and congratulated me on such “healthy” number.

My Ayurvedic MD said otherwise. She told me my cholesterol was way too low and a substantial cancer risk. This information shocked me as I had never heard it before, but I did what she told me to do. Eating more fat brought up my cholesterol substantially (to around 175 at that time) over a period of a few months. There is no doubt this played a big part in my panic attacks disappearing. The benefits of cholesterol in the diet are highly underrated by conventional medicine.

My Ayurvedic doctor also told me to stop doing extended cardio exercise sessions. She told me that marathons and triathlons are a really dumb idea for longterm health. These forms of exercise are completely unsuitable for everyone, but most especially for my physiology.

She recommended brisk walking, rebounding, yoga or other less strenuous exercises instead. At that time, I was doing 1-3 hard core cardio classes per week. At her suggestion, I stopped these forms of exercise entirely, got a dog, and started walking!

Panic attacks can frequently signal a system that is in toxic overload. Dry brushing the skin with a natural bristle brush or loofah mitt before bathing or showering each day goes a long way toward assisting the elimination of whatever toxins are causing an undue burden.

The skin is the largest organ of elimination and dry skin brushing is the most effective way to assist the skin with this important function. Brushing gently in circular strokes toward the heart starting with the feet is the best way to proceed.  Avoid any areas of skin irritation such as eczema or psoriasis. Do not brush the face, neck, chest, or genital area.  Finish your brushing with a sweep across each collarbone from neck to shoulder. This stimulates the glands in that area to dump their toxins furthering the cleansing process. It’s a good idea to drink a glass of filtered water after showering to assist with the elimination of any toxins that got knocked loose.

Almost everyone breathes incorrectly. When shallow breathing occurs, it increases anxiety tremendously. It is important to train yourself to breathe like you did when you were a baby – slow and deep. Have you ever watched a baby breathing in its crib? Babies breathe so slowly and deeply that a first time parent sometimes thinks that the child has stopped breathing entirely!

We adults need to relearn how to breathe the same way. In through the nose for about 8 counts, hold for 4 counts, exhaling through the nose making a kind of Darth Vader breathing sound at the back of the throat as you do so for another 8 counts. Breathing this way stimulates the vagus nerve which facilitates relaxation.

This is the way you are taught to breathe in yoga class too, which is one big reason yoga is so very helpful in helping folks relax.

Anyone feeling a panic attack coming on can frequently short circuit the process by taking a few long, slow, deep breaths as I’ve just described. In the early days of beating back my panic attacks, learning to breathe correctly was a big tool in my toolbox.

The breath is a very powerful instrument for health! Practice it on a daily basis else you won’t do it right in the heat of the moment when you need it.

Hopefully, these suggestions for natural panic attack remedies can help you overcome these frightening episodes if they are causing you distress right now. Have you overcome a similar situation?  If so, how did you do it? What holistic therapies or diet changes made the difference?

Nutritional Brewers Yeast: What You Need to Know before Buying