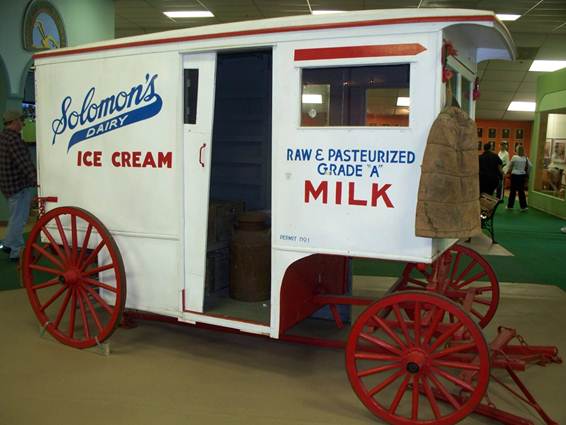 When most people think about the rise of pasteurized milk in America, they tend to think of people getting sick and dying from raw milk in such numbers that a rapid transition to the “safety” of processed milk occurred out of the sheer necessity of preserving the public health.

This is simply not so.

As you can see in the picture above of an old time ice cream wagon taken by my friend Cynthia at the Florida State Fair last week, there was a time in American history when raw milk and pasteurized milk coexisted in peace.

If people wanted raw milk, they could easily obtain it.  If they preferred pasteurized, that was available too.

There was no rapid and desperate movement to pasteurize except in the major cities where filthy, confinement dairies with sick cows fed distillery waste were producing a tainted, bluish milk that was making children very ill.

Pasteurization as a whole in America was a very slow process that gradually gained momentum beginning in about 1910.  Led by businessman Nathan Strauss who, along with his powerful ally Abraham Jacobi MD, President of the American Medical Association, convinced states and municipalities across America and even Europe to adopt regulations requiring pasteurization of all milk that wasn’t “certified” raw milk to preserve the health of those living in the crowded cities where quality raw milk was not easily obtained.

As described by Dr. Ron Schmid, author of The Untold Story of Milk:

For Straus and those officials who backed him, pasteurization was a matter of economics and practicality. Most recognized that certified raw milk was safe and healthy, but it was expensive to produce and sold for two to four times the cost of ordinary milk. As a practical matter, the enforcement of strict rules of hygiene on the 40,000 independent dairy farms that supplied milk to New York City was impossible. Pasteurization was seen as a quick, technological fix that would make New York’s [dirty confinement] milk safe to drink.

By 1940, the uneasy truce that had existed between certified raw milk and pasteurized milk had ended. All out war on raw milk had been declared.

The powerful voices that had begun to call for compulsory pasteurization of all milk in 1912 had finally succeeded in their mission. Access to even certified raw milk began to disappear and by the 1950’s, most people could no longer obtain it not because certified raw milk wasn’t safe, but because it was the path of least resistance for government regulators and the most profitable step for an emerging and powerful corporate Dairy Industry.

With the Dairy Industry celebrating 100 years of pasteurization this year, it is important to note that raw milk consumption in America is once again on a rapid upswing after decades of repression with over 3% of the population in 2007 regularly consuming it.   The health benefits of raw milk from cows grazing on green grass has caught on with people from all income levels and walks of life with a glass of raw milk a powerful symbol representing the fundamental right to choose the nutrient dense, unprocessed, local foods of one’s choice.

Stay tuned.  The “raw” ice cream man may yet again be seen in neighborhoods across North America!