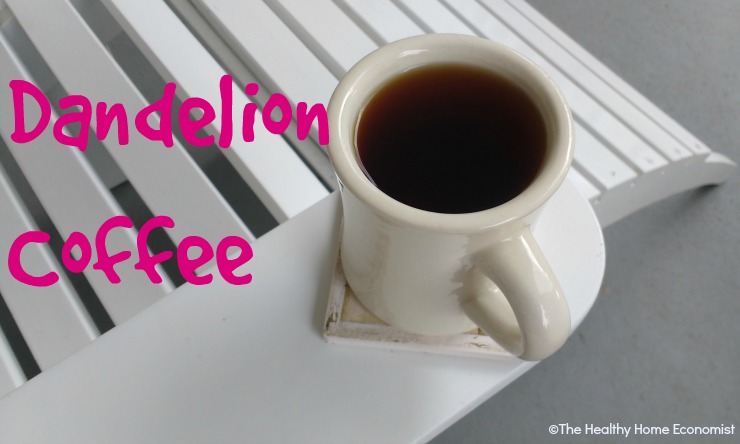 One of my favorite hot drinks especially in the morning is dandelion coffee.

Spring is a wonderful time to enjoy this rich, delicious beverage as dandelions are springing up everywhere. You probably picked at least one as a child, blew on the feathery white seed head with all your might, and perhaps made a wish!

If you don’t spray your yard with toxic herbicides and pesticides, you will no doubt notice that dandelion grows conveniently close to the front door for you to freshly pick to benefit your family’s health.

Dandelion is an herb that looks exactly like coffee when brewed as you can see from the picture above. It also smells like coffee and, most importantly, tastes like coffee but without the daily caffeine jolt to the glandular system that can bring on adrenal fatigue symptoms along with graying hair and prematurely aging skin.

While decaf coffee might initially come to mind as the best coffee substitute, unless you fork out the extra money to buy organic, you are likely getting a dose of toxins with every cup.

This is because a common process for manufacturing decaf coffee includes the unwelcome residue of industrial chemical solvents like methylene chloride or ethyl acetate. Be careful too, since decaf coffee made using ethyl acetate is frequently marketed as “natural” decaf since the solvent is derived from fruit.

Other methods for making decaf coffee are nontoxic, such as the Swiss Water method, however, even when manufactured safely, decaf coffee still contains caffeine (anywhere from 4-16 mg per 16 oz/ 473 ml) and so is not a good choice for those looking to fully rest and recover from adrenal issues.

This is where dandelion coffee comes in! 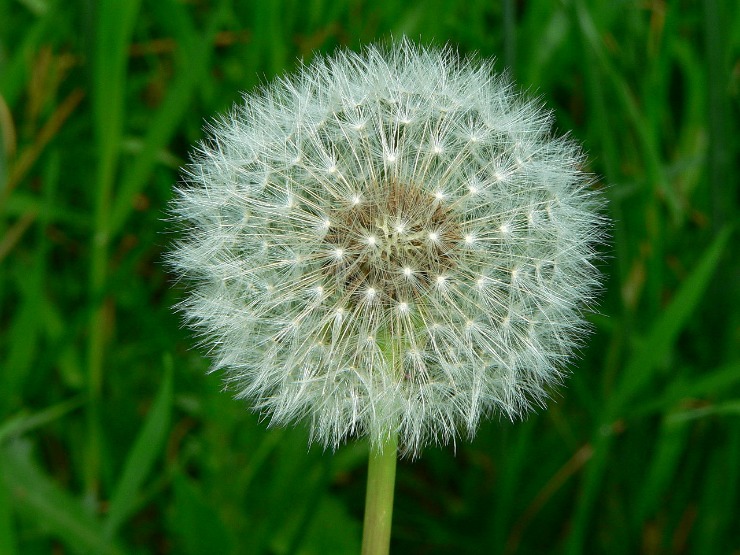 Dandelion coffee is 100% caffeine-free but still has that rich taste of coffee that so many people love.

Dandelion has been used in traditional medicine for centuries to support healthy liver function. Next to milk thistle, dandelion is one of the most effective herbs for this purpose.

In Traditional Chinese medicine, dandelion is considered a nontoxic herb with exceptional values for its choleretic, diuretic, anti-rheumatic and anti-inflammatory properties.

With regard to modern research, the International Journal of Molecular Sciences published a study in 2010 confirming the anti-inflammatory properties of dandelion root and leaf.  Researchers found a beneficial antioxidant effect from consuming dandelion, concluding that:

Although most people put down weed killer on their lawns to eliminate dandelion, the truth is that this herb is highly beneficial to soil health. If you are a gardening buff, dandelion helps bring nutrients from the deep dirt to the top of the soil. It also greatly attracts bees and other beneficial insects like ladybugs. If you have fruit trees or vines, dandelion releases ethylene gas that facilitates the ripening process.

And, when you mix in some healthy fats like butter or weight loss boosting coconut oil into your cup of dandelion coffee, you get all the benefits of the trendy bulletproof coffee without the downsides of which there are many.

One thing to be clear about. If your intention is to make dandelion coffee, you will be using the roots and not the leaves of the dandelion plant. Dandelion root is what smells and tastes like coffee.

Dandelion leaf tea can also be brewed, but it is used more as a diuretic to help reduce swelling or bloating from excess water retained in the tissues. Dandelion root tastes a whole lot better than the leaves too, in my opinion!

Best to reserve the dandelion greens for your salad. According to nutritionist Julie Upton:

The pesky plant you call a ‘weed’ in your yard is actually a nutrient-packed salad green that’s for sale at farmer’s markets and natural foods retailers. The greens are even cropping up on the menus of top chefs. The trendy spring salad green is rich in vitamins, minerals and beneficial phytonutrients. They also have just 25 calories and 3 grams fiber per cup and contain calcium, iron, potassium, and zinc (2). 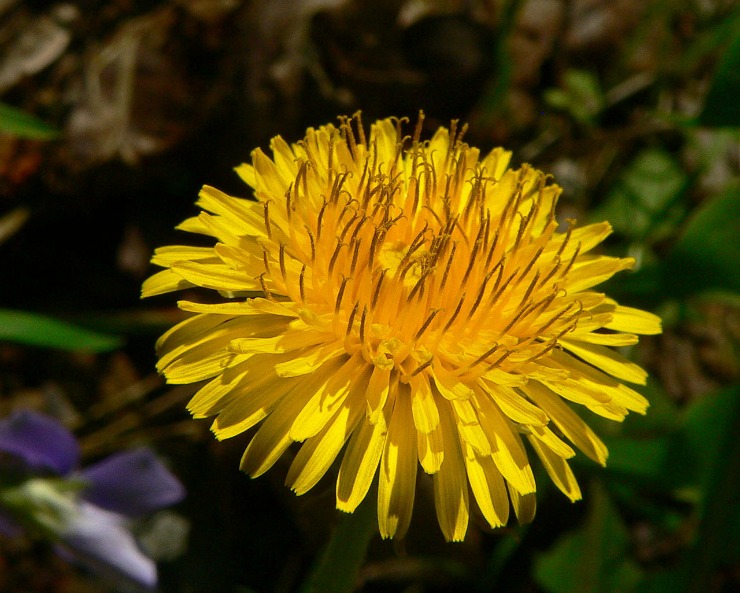 There are several different ways to prepare a cup of dandelion coffee. First, you can go the ultra-simple route and buy a box of roasted dandelion root tea bags or the dried tea in bulk. This is what I have in my pantry.

Once you have your roasted dandelion tea on hand, place one teabag or a tea infuser containing 1 tsp of dried tea in a mug. Pour hot water over it. Let it steep for two to three minutes and then enjoy black, naturally caffeine-free dandelion coffee. Or, you can enjoy it with a touch of added sweetener and cream. I leave the teabag in the cup as I like my dandelion coffee very strong tasting. If you prefer a less robust coffee flavor, be sure to remove the teabag right after the liquid gets dark which takes just a couple of minutes.

The next way to enjoy dandelion coffee is by purchasing a roasted dandelion blend that has additional herbs to heighten the coffee-like aroma and flavor. My favorite for this purpose is Dandy Blend. The ingredients of Dandy Blend are extracts of roasted barley, rye, chicory root, dandelion root, and sugar beet.

Despite containing barley, rye, and sugar beet (a primarily GMO crop), Dandy Blend is nonGMO and gluten-free too.

The final way to prepare a cup of dandelion coffee is by using fresh roots. If you are fortunate to have dandelion growing in your yard during the spring and fall months (or in the summer if it’s shady), simply pick a handful or two and be sure to pull out the roots.

Wash the roots in filtered water and then coarsely chop in a food processor. Roast the washed and chopped dandelion roots at 350 °F/ 177 °C for about 20 minutes or until the roots turn a dark brown color. Take care not to burn them though!

Let the roasted roots cool and then store in a glass jar in the refrigerator. They will last for several months.

To make a cup of dandelion coffee, place 1 tablespoon of the freshly roasted roots in a tea infuser. Place the infuser in a large mug and pour in hot water. If you’ve tried roasted dandelion tea from the store before, you will notice that your homemade dandelion root coffee tastes stronger and more bitter. But, adding a touch of sweetener like maple syrup and cream (coconut cream if you have a dairy allergy) easily resolves this problem.

In addition to a coffee substitute, dandelion root is an herb ideally suited for making hot drinks like a red rooibos latte. It is highly detoxifying similar to the benefits of drinking a matcha latte or yerba mate.

The process for making a triple strength dandelion coffee latte is below. 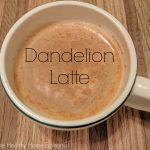 Maple syrup may be substituted for the coconut sugar.

Coconut milk may be substituted for the dairy milk.

Ground nutmeg can be used to top the latte instead of freshly ground cassia or Ceylon cinnamon if desired.

If dandelion coffee is something you would like to try to switch off coffee and rest your adrenals, my advice is to go slow and start with one cup per day. Beyond that, build up gradually. I’ve had some people report that the detoxifying effect of the dandelion root can result in a close relationship with the bathroom until your digestive tract adjusts!