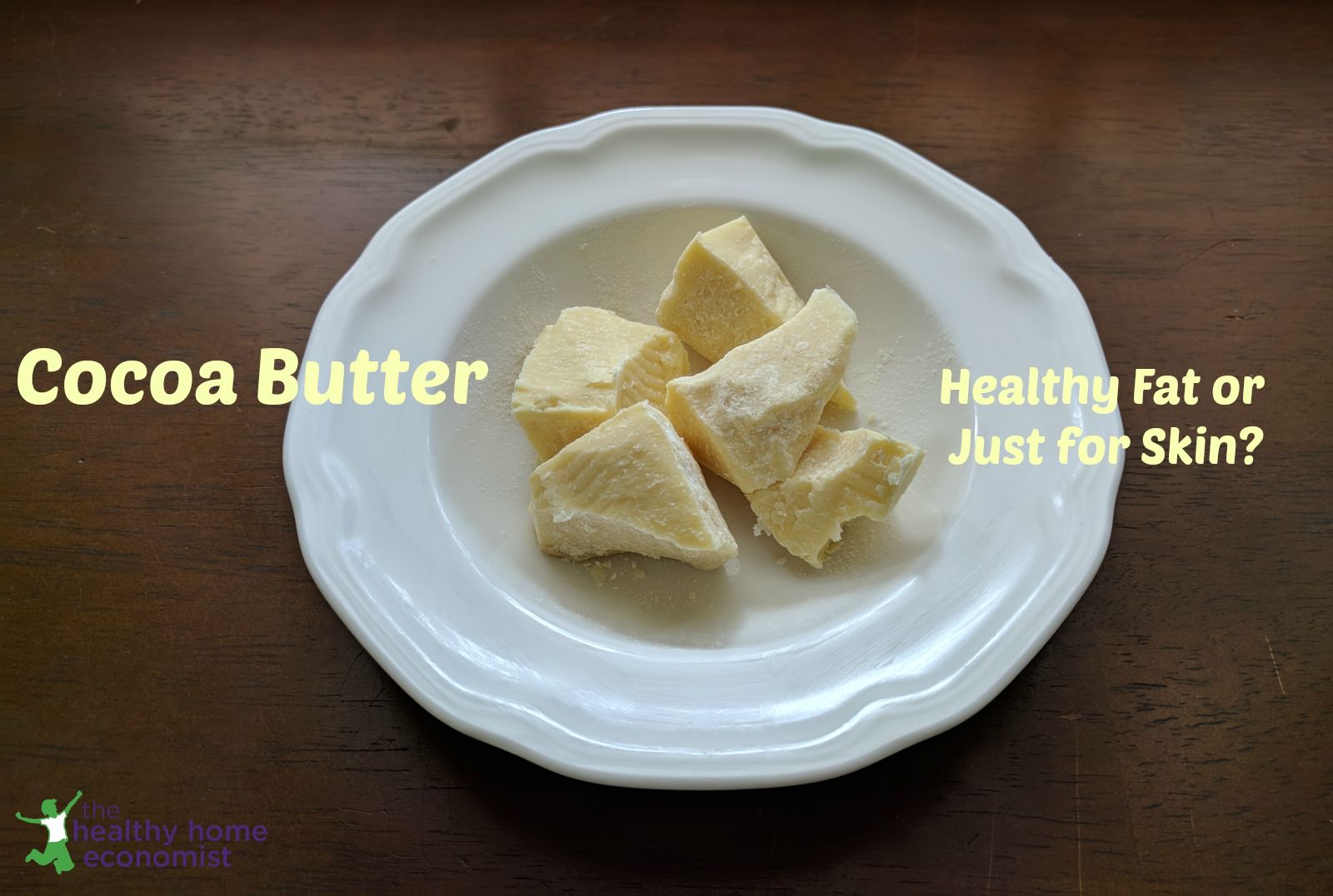 Most people associate cocoa butter with skin moisturizing. Creams, lotions, and other skincare products frequently contain this pale yellow vegetable fat extracted from the cocoa bean. It is also a popular ingredient in homemade soaps.

As it turns out, cocoa butter is also a very healthy traditional fat to eat! And, if you are sensitive to chocolate, you can enjoy its many health benefits and warm, chocolate aroma free of caffeine and other irritating substances that trigger sensitivities in some people.

Cocoa was first discovered by the Olmecs. They are the earliest known civilization to inhabit Mexico. This civilization is also the first group of humans to consume what cocoa is best known for – chocolate!

The Olmecs discovered the small, evergreen cacao tree (Theobroma cacao) by observing rats devouring the fruit, soon putting the brown pods to beneficial use for humans. Over time, many other civilizations adopted cocoa as food, including the Aztecs and the Mayans. In fact, Mayan mythology lauds cocoa as divine in origin, given to man by the gods as a gift.

Cocoa was among the first New World crops to be commercialized early in the 16th century shortly after Columbus arrived. A decade later, Columbus discovered cocoa for himself, but initially did not think it worthy of his attention. It wasn’t until 1528 that Europeans discovered the culinary allure of what they dubbed “brown gold”. (1, 2)

From Cocoa to Chocolate

Since its first introduction to European culture, chocolate beverages made from roasted cocoa powder have proved hugely popular. Initially, only the upper class could afford the treat. Throughout the 1700s, cocoa grew in popularity until businesses began to specialize in chocolate desserts for the masses. In Italy, awards for the makers of the best tasting chocolate became commonplace with the trend quickly catching on elsewhere. (1)

Eventually, cocoa made its way back to the New World, landing in Massachusetts in 1765. Sweetened cocoa proved a highly popular and even addictive food from that point on, satisfying the sweet tooth of generations of Americans. Milton Hershey founded his company in 1892, and a few decades later Frank Mars arrived onto the scene. Hershey and Mars chocolates dominated the American market, forming an duopoly within the chocolate industry in America that continued for decades. The two companies remain huge corporate success stories today though there is now far more competition. (2)

Where does cocoa butter fit in the history of cocoa? Theobroma oil as it is called, is the vegetable fat extracted from the cocoa bean. It has a wealth of health benefits usually overlooked in favor of its antioxidant rich, caffeinated cousin – chocolate.

Let’s examine this traditional fat both in unrefined and refined state.

Cocoa vs Cacao Butter (and Powder)

Cocoa beans are traditionally roasted and/or fermented (for making chocolate) likely because they are incredibly high in anti-nutrients, most notably phytic acid and lectins. Processing also improves the flavor tremendously. Heat readily destroys lectins and significantly reduces the presence of phytates. Hence, these digestive impairing substances are much less of a worry when cocoa is consumed in moderation.

In recent years, certain food philosophies have popularized raw cacao over traditional cocoa. Cacao powder is the raw bean cold-pressed to remove the fat (cacao butter) and ground into a fine powder. It might also be chopped into nibs.

Cocoa powder looks exactly the same as cacao powder, but it comes from roasted and/or fermented beans. It contains less enzymes and nutrients than raw cacao powder but is significantly lower in anti-nutrients. This fact is rarely mentioned but is extremely important!

Does this make raw cacao powder healthier as claimed by many websites? The answer depends on how you look at it! In my view, not necessarily! I personally never use raw cacao powder due to the potential for digestive damage from the extremely high amount of anti-nutrients. The benefits of eating soaked nuts versus raw is an example that is perhaps more familiar.

Fortunately, raw cacao butter does not have the same problem as the fat contains no irritating substances. Let’s examine the more subtle differences between heated and unheated fat extracted from the cocoa bean.

Ultimately, the difference between cocoa butter and cacao butter is simply that one comes from roasted beans and the other from raw beans.

But, what about the heat processing of the cocoa beans. Would this damage the fat in the cocoa butter?

To answer that question, we must examine the fatty acid profile and smokepoint of cocoa butter.

The fatty acid profile of cocoa butter is as follows:

In sum, cocoa butter is an extremely healthy fat from the perspective of traditional diets. Its composition is overwhelmingly saturated and monounsaturated fats with very little polyunsaturated omega-6 fat.

Overconsumption of polyunsaturated omega-6 fats is widespread in all of Western society as food manufacturers use it almost exclusively in processed foods, organic or not. These fats should ideally represent a very small fraction of overall fat consumption. When eaten to excess, they can contribute to obesity and systemic inflammation among other ills.

This is relatively high for an unrefined fat, making it a great oil for baking and cooking in general. However, it does not reach the smoke points of two very other healthy unrefined oils, avocado oil and ghee.

How could cocoa butter be healthy when it is nearly two-thirds saturated fat?

This is a topic of huge contention in the health community. Saturated fat is actually good for you and liberally consumed in traditional diets with no ill effect. Note the coconut oil loving Polynesians prior to industrialization who experienced little to no heart disease or obesity issues. (4)

However, in the latter half of the 20th century, with a substantial rise in the prominence of heart disease, scientists set out to find the cause. They discovered that cholesterol levels seemed to increase with the consumption of saturated fats. With the knowledge they already had linking high cholesterol with development of heart disease, they pronounced saturated fat consumption as the “cause” and preached this myth as nutritional truth for decades.

However, this is a false equivalency. The first red flag is that their conclusion was based on no scientific experimentation on humans. Secondly, they included transfats in their analysis, which resemble saturated fat chemically, but are far from identical.

They simply concluded that A causes B and B causes C, therefore A causes C. This is the logical fallacy known as the association fallacy. Only in recent years have many honest scientists walked back this enormous error that has harmed and killed millions of people. Blaming cholesterol for heart disease is like blaming fire fighters for fires.

So enjoy your delectable cocoa butter! The high saturated fat content is not going to contribute to heart disease like the flawed and now disproven research from the late 20th century warned. (11)

The extremely stable lipid profile of cocoa butter gives it tremendous shelf life, around 2-3 years. Raw cacao butter is more delicate and for this reason is recommended for storage for no longer than one year.

Cocoa butter starts to melt at or above 93 F/ 34 C, so it is likely to remain solid year round stored in the pantry. It’s high resistance to rancidity also means that it doesn’t require refrigeration.

No surprise that cocoa butter is especially good for skin health. Dry, sensitive, or irritated patches of skin respond well to its application. This is why cocoa butter is used in a multitude of lotions and other skin products. Next time you have chapped lips, try rubbing a bit of cocoa butter on them! No need to buy a pricey lip balm. Just reach into the pantry!

Cocoa butter is an effective skin moisturizer, and it helps reduce or prevent peeling from sunburn.

In fact, cocoa butter is extremely beneficial for pretty much any kind of skin problems, whether the cause be age or simply a rash. While excellent as a deep moisturizer, it is not suitable for acne prone skin as it has a comedogenic rating of 4 out of 5. (12)

As mentioned earlier, it makes a wonderful nondrying soap. Try it for making homemade bath bombs!

Cocoa butter makes an excellent scalp or hair conditioner. Its potent moisturizing properties can help with flaky scalp caused by dryness, although improving flakiness due to dandruff is more questionable. Coconut butter would be a better choice for that purpose due to the high amount of antimicrobial lauric acid.

It is soothing as an aftershave, helping to prevent rash from irritation of the skin surrounding the hair follicles.

Should You be Enjoying Cocoa Butter?

Cocoa butter is a wonderful fat to enjoy particularly in the making of healthy treats and desserts. Its chocolate aroma is alluring and can be enjoyed even by those sensitive to chocolate as it is caffeine and anti-nutrient free. I like to enjoy it as a mug of hot white chocolate.

I also sometimes melt a chunk of pure raw cocoa butter (this is the brand I use) in a small pan on the stove emulsified with a bit of date syrup (to taste) and a teaspoon or two of organic coconut milk powder. A dash of vanilla extract or vanilla powder is nice to add too. Heat just high enough to melt the fat but not high enough to eliminate the enzymes. In other words, keep it below 118 °F/ 48 °C. Solidify the mixture in the fridge, cut into a few bite sized pieces, and enjoy melt in your mouth white chocolate treats without the caffeine!

Olio Nuovo Olive Oil. What it is and Why to Try