How to source, prepare and enjoy the 5 benefits of bulgur wheat, a traditional cereal grain consumed by healthy people groups for millennia. 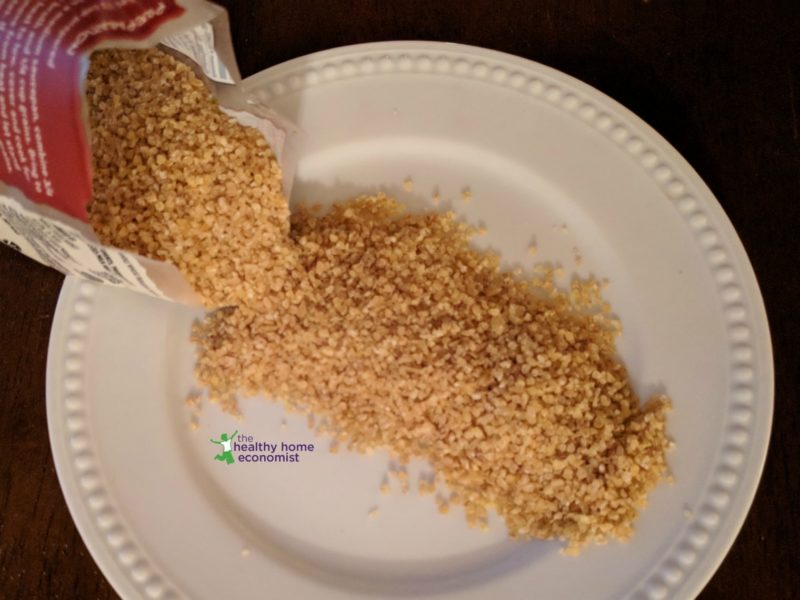 Grains play a very important role as affordable, easily cultivated staple foods around the world. In Asia, rice is the prominent player. In North America, corn and wheat are king. Middle Eastern countries also rely heavily on wheat, but it isn’t in the form those living in the United States and Canada commonly encounter. Instead, bulgur wheat wins the day.

But what is this traditional food known as bulgur? Is it a safe form of wheat to eat?

The Making of Bulgur

To make bulgur, wheat berries are first soaked for many hours. After a thorough soaking, the grains are partially cooked or parboiled. The wheat is then dried and cracked for ease of storage and quick cooking when added to a dish or eaten on its own.

In short, bulgur is wheat’s answer to quick oats and instant rice! Ease of use makes it a popular substitute for both rice and couscous in some cuisines.

While almost any variety of wheat is appropriate, durum wheat is historically the most popular variety for making bulgur.

Why is this? First of all, it is an ancestrally important variety of hybrid wheat.

Hybrid wheat is not to be confused with GMO wheat, which as of this writing, is illegal to cultivate anywhere in the world, although test plots have caused some contamination issues in the Western United States in the recent past.

The word durum comes from the same Latin root where we get English words such as durable. Hence, durum is known as the “hardest” of all wheats. This hardiness makes it perfect for enduring the rigors of bulgur processing.

Let’s explore this in a bit more detail.

A descendant of emmer, durum is the only tetraploid variety (4 sets of chromosomes) of wheat of commercial significance cultivated currently. The less popular kamut is also a tetraploid.

Most modern wheats including spelt are hexaploid (6 sets of chromosomes).

Einkorn is a diploid (only 2 sets of chromosomes) and thus the only completely unhybridized wheat on Earth.

The genetic differences between wheat varieties is a very interesting topic to explore especially with regard to gluten.

The plant genes responsible for contributing these peptides in wheat gluten are located on the third set of chromosomes that the hexaploid variants inherited from their wild parent. It is very interesting to note that neither the diploid nor the tetraploid cereal grains contain this genetic material. That is, cultivated diploid einkorn, and tetraploid emmer wheat along with certain of the durum pasta wheats as well as durum variants such as Kamut® (a brand name for T. turgidum or T. turanicum) and T. polonicum (Polish wheat) do not contain this genetic material. (1)

Thus, because durum qualifies as an older heirloom wheat, it is one that people generally tolerate better than modern cultivars. It is also more nutritious.

In contrast, modern wheat was developed during the so-called Green Revolution. During this food bastardization period following World War II, modern wheat hybrids were created via irradiation. Modern wheat is also excessively high in gluten. Some researchers point to this period as the tipping point for the rapid development of wheat allergies in the decades following. (2)

Note that some people think bulgur wheat is sprouted. While bulgur wheat could be made after sprouting wheat, this is not the norm. While the cookbook Nourishing Traditions outlines this method, evidence of this practice traditionally is hard to find. In addition, I would be very surprised if modern versions add this expensive and time consuming step to the process of bulgur production.

Here’s the good news. Even if not sprouted, the soaking and parboiling of the wheat berries during the making of bulgur achieves some of the same benefits. Most notably, the nutrient content of the grain becomes more bioavailable for absorption by the human digestive tract.

However, unlike actual sprouting which creates a significant amount of Vitamin C and increases B vitamins substantially, bulgur does not contain any nutritional advantage over regular wheat. It is simply more digestible from the long soaking process and parboiling.

Research confirms that the parboiling process does make bulgur wheat more digestible and nutritious than standard wheat. However, there doesn’t seem to be any research comparing it to sprouted, soaked, and sourdough versions. The long soaking followed by parboiling reduces phytic acid and other anti-nutrients substantially. (3)

Unlike most grains used in modern cooking, bulgur is still relatively whole. The soaking, drying and cracking process only removes a small bit of the bran.

Once cooked, it is exceptionally low in protein (3%). It is also very high in fiber, taking care of 25% of the RDA in a single serving. It also contains some useful minerals, like manganese (over 50% of the RDA), magnesium, and iron. (4)

Like other grain staples around the world, in traditional cuisines, bulgur is a filler food. In other words, it is a common and inexpensive ingredient married to more nutritious or flavorful options like ground meats (Kibbeh) including organs. Alternatively, serving it with dairy products like yogurt, kefir and milk along with various fruits and vegetables is also common.

Bulgur’s biggest selling point is ease and speed of preparation. Just buy a box or bag, boil some water or bone broth, add the bulgur, and in 10 minutes or so it is ready. Also, the parboiling process improves the flavor over standard wheat. Authentic bulgur has a rich, nutty taste and smell that are hard to replicate or replace in traditional dishes that call for its use.

Bulgur has a fairly long history of consumption, especially in Middle-Eastern, Turkish, and Indian cuisine. For thousands of years, it has been a staple in many ethnic cuisines and dishes such as Kibbeh and Tabbouleh. Along the way, ancestral peoples referred to it by a variety of names.

Bulgur has been called by many names. The Roman word for it was cerealis; Israelites called it dagan; whereas other Middle Easterners called it arisah, which is how it was referred to in the Bible. Biblical scholars translate arisah as “the first of the coarse meal” and, according to Biblical archeologists, was a porridge or gruel prepared from parboiled and sun-dried wheat. (5)

Bulgur’s long and wide usage reminds us that wheat, while currently maligned, has a long history of consumption among many healthy people groups and cultures. It also reminds us that making meal prep faster and easier isn’t just a modern phenomenon. Parents a thousand years ago were looking for faster meal options just like families today!

Be aware that cracked wheat is often confused with bulgur. It is not even close to the same thing!

Cracked wheat is neither soaked nor parboiled first as traditionally practiced. As a result, it is far less digestible and nutritious than bulgur. It is also more likely to trigger digestive issues from the lack of proper preparation.

To this day, bulgur wheat is still traditionally made across the world. Cracked wheat, on the other hand, is a modern convenience product produced by food industrialization. Increased bioavailability of nutrients is notably lacking.

In addition, cracked wheat is frequently made from modern wheat cultivars while bulgur is ideally made from the better tolerated durum.

How to Make Bulgur

Ancestral societies made bulgur by first filling large pots filled with water and wheat berries for an extended soak. Then, they boiled the berries until the wheat was ready to crack open.

After draining the pots, the grains are spread out on flat roofs to dry in the sun. After dehydration, light hammering of the wheat by hand completes the cracking of the grains. The cracking also removes a small portion of the bran. The process is similar to hand polishing of rice in Asia.

If you’ve had the opportunity to travel in more rural parts of the world such as the Middle East where people still make bulgur, you’ve perhaps witnessed this process firsthand.

While traditional artisan preparation uses soaking, cooking, sun drying and debranning by hand before crushing with a stone or coarse mill, modern production is more efficient. Factory machinery cleans, washes, and tempers the durum followed by cooking just below boiling at 203 F/ 95 C. Then, the wheat is high heat dried, de-branned, cracked, and sifted. The starch becomes gelatinized during the cooking process. (6)

It is very simple to prepare and cook bulgur at home for adding to a dish or enjoying on its own. While you can certainly use plain water or milk, it is best to cook it in broth especially if you plan to add it to a savory dish mixed with meat and/or vegetables.

Want to Try Bulgur? What to Look for

If you need to use bulgur wheat to prepare a traditional recipe, especially around certain holidays, make sure you are sourcing an organic option. This is absolutely crucial!

Conventional nonorganic wheat grown in North America likely contains significant residue from pre-harvest glyphosate (Roundup) spraying among a host of other agricultural chemicals. Preliminary research indicates that this herbicide residue has the potential to seriously disrupt the human gut microbiome and harm beneficial bacterial strains in the intestinal tract crucial to our health.

Note that while traditional groups used durum or similar heirloom wheats, many varieties of bulgur sold in the United States are not. For example, Bob’s Red Mill uses hard red wheat. If you prefer traditional bulgur, try to find a brand that uses durum. Bulgur made from farro or einkorn would be even better. The 365 Organic brand of bulgur shown in the photo above is made from durum.

For those who are gluten free, paleo, celiac, or on other diets that temporarily restrict grains to heal the gut, bulgur wheat is still wheat, still contains gluten, and is still a grain. If you seek a gluten free alternative to bulgur that makes a delicious breakfast too, try teff, buckwheat and amaranth porridge.