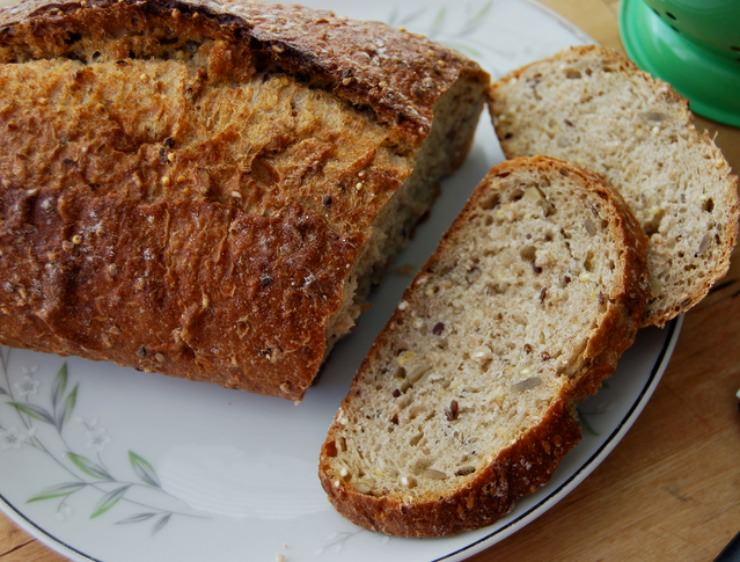 I realize the title of this post is rather shocking. I was floored too, when I first heard this information from Rami Nagel, author of Cure Tooth Decay, in a casual hallway conversation at a nutrition conference.

Isn’t white bread, after all, one of the common causes of tooth decay because it is devoid of nutrition and basically white sugar dressed up as food?  Isn’t white flour one of the “displacing foods of modern commerce” as written about by Dr. Weston A. Price in his groundbreaking work Nutrition and Physical Degeneration?

Dr. Price himself recommended consuming the entire grain (bran and germ) as have many health experts since his time.   Scientific analysis of whole grains indicates a much higher level of minerals and overall nutrition than that of refined grains.

Based on scientific analysis alone, it seems clear that white bread should be avoided in the diet of those seeking nutrient dense foods and vibrant health.   The health and condition of the teeth and mouth is a window to the body meaning that oral problems are the canary in the mine for problems brewing elsewhere. Note the strong link between periodontal disease and heart disease and stroke.

But, could there be something else going on here – something that a blind recommendation in favor of whole grains is missing?

Fact is, I know a number of folks that eat a whole foods diet including cod liver oil, never eat white bread and even go so far as to make their own whole wheat bread with fresh flour and they are still having cavity problems in the family.

Let’s dig beyond the sterile walls of a lab and see what else might be in play ….

Traditional Societies Did Not Typically Use the Whole Grain

The argument against whole grains stems from Rami’s claim that traditional societies did not usually make use of the entire grain.    Rami has studied this issue in depth and has confirmed that the practice of removing the bran occurs traditionally in the French Alps with rye, in Africa with wheat and corn, and in Tibet with barley.

Why did these cultures remove the bran?   Apparently, the practice occurs because the bran is loaded with plant toxins such as lectins that cannot easily be removed by sprouting, sour leavening, soaking or even cooking.

In the second edition of Cure Tooth Decay

Quinoa, buckwheat, and aramanth appear to be exceptions to this rule. Rice falls somewhere in between as traditional rice eating cultures typically removed some or all the rice bran before cooking.  This was accomplished by pounding the rice into what is referred to as partially milled rice. I wrote about this in a past article which discusses why white rice is healthier than brown.

Once the Bran is Removed, What’s Next?

Rami goes further suggesting that whole grains must be soured first to significantly reduce phytic acid. Phytic acid is another big reason why grains cause cavities as this powerful anti-nutrient very effectively blocks mineral absorption in the gut. Phytic acid causes severe rickets when given to dogs as discovered and studied by researcher Edward Mellanby.

Rami’s research also indicates that sprouting grains does not reduce phytic acid significantly enough to make them safe for consumption.

In addition, Rami told me that soaking whole or sprouted grains in buttermilk, clabber, yogurt or kefir does not seem to reduce phytic acid content significantly. However, he did say that soaking will reduce phytic acid content but that plain, filtered water plus liquid whey is the best method for accomplishing this (substitute fresh lemon juice or apple cider vinegar for dairy free soaking).

What Are You Going To Do about Whole Grains?

I greatly respect Rami Nagel’s work and I think what he is discovering regarding tooth decay and healing tooth and gum problems in general is truly ground breaking. Therefore, I plan to adjust the preparation of grains in my own home based on our conversation that is summarized in this post. Here’s what I plan to do:

What changes to your grain preparation techniques will you implement based on this information, if any?  Please share your ideas.

The Truth About Wisdom Tooth Extraction