A microscopic view of caffeine crystals and why the world’s favorite stimulant is anything but harmless to the physiology of those who consume it. 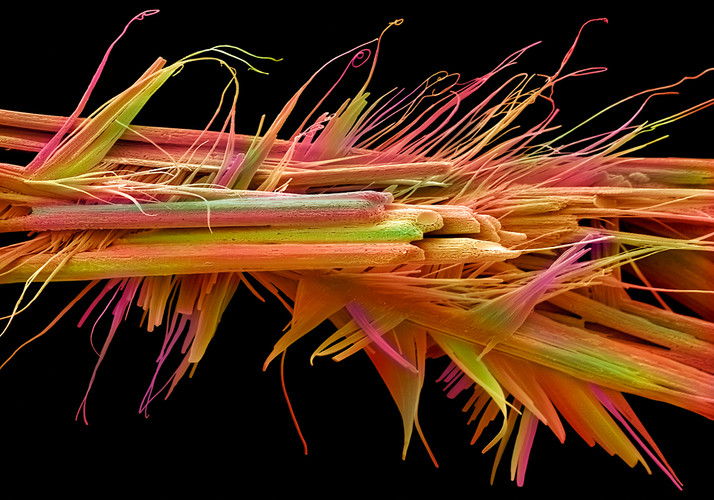 Take a close look at the picture above.

Does this look friendly to you? Think with your gut – literally.

Is this something that you think your body would welcome if you consumed it frequently and in large quantities?

Do you think this would be health-promoting in any way?

Caffeine is a Plant Pesticide

Even without knowing a single thing about caffeine, it is abundantly clear by simply looking at this astonishing electron micrograph of caffeine crystals that this substance is very likely a toxin to the body. These insidious crystals are found in varying quantities in the leaves, seeds, and even the fruit of some plants and guess for what purpose?

To stun, paralyze, and even kill insects that feed on the plant for food.

In short, caffeine is a natural pesticide.  It is certainly not on the toxic magnitude, of say, Monsanto’s Roundup, but it is a pesticide just the same.

If insects are instinctively smart enough to avoid plants containing caffeine to ensure their own survival, don’t you think you probably should avoid it too?

Let’s think about what happens when you consume caffeine.

Caffeine increases stomach acid production.  While this is not necessarily a bad thing if you just ate, it can cause problems over time if excessive stomach acid becomes a constant feature of your personal biochemistry.

Acid reflux (GERD) is one symptom of imbalanced stomach acid levels and Prilosec, the over the counter medication for this condition is one of the most popular drugs stolen by organized retail crime (ORC) rings – indirect but telling evidence of the widespread nature of reflux problems today.

Could the reflux epidemic be associated with all those Starbucks and Red Bulls folks are consuming?  Remember the gal who recently put herself in the ER by drinking too many 5 Hour Energy Shots?

The high demand and dependence on PPI drugs (proton pump inhibitors) like Prilosec or a 24-hour drug like Nexium do not come without a heavy price!

Undesired weight gain is one of the associative side effects of long term treatment with PPI drugs as reported and published in the peer-reviewed World Journal of Gastroenterology.

Even folks who are seriously health-conscious seem to have trouble shaking the caffeine habit which never ceases to surprise me.

Those who eat low carb, keto or paleo seem to have a particularly difficult time managing caffeine intake perhaps because caffeine stimulates the liver to release sugar into the bloodstream, in essence, a way to get carbs without actually eating them!

Don’t forget about the 5 Hour Energy Shot junkie who ended up in the ER. Let the lesson ring clear. Her liver started to shut down from all that caffeine because she was drinking about 10 of those suckers per day for 2 weeks straight!

I know several people on a first name basis who are not far behind that insane level of caffeine consumption and I’m sure you do too.  Just because it doesn’t put you in the ER doesn’t mean it’s not hurting you badly.

One thing’s for sure.  If your diet is making you so tired that you need caffeine to indirectly boost your blood sugar and artificially stimulate your adrenals, you’ve got a problem and the diet you’re following is clearly not optimal for you.  Time to do some tweaking my health-conscious friends!

C’mon.  You know a big plate of sprouted waffles would be totally, rockin’ AWESOME.

There’s no doubt a plate of sprouted waffles – YES – even every single morning would be a more healthful habit than that coffee addiction.   Don’t fool yourself and rob Peter to pay Paul.

Frequent stimulation of the adrenal glands from caffeine eventually leads to adrenal exhaustion whether this be at age 20 or age 60.  If you’ve been drinking coffee for years and think you are “just fine thank you”, think again.  Feeling bone tired and not being able to get off the couch to do much of anything could be just around the corner as hormonal problems can strike suddenly and seemingly out of the blue (just ask any menopausal woman).  It is the sleeping giant you best not ignore.

Other symptoms of adrenal exhaustion include lack of physical endurance and stamina, weight gain, reduced ability to handle stress, impairment of calcium absorption, and depression of immunity.

Probably most worrisome is the blood sugar issues caffeine exacerbates as mentioned earlier. Caffeine stimulates the liver to release stored sugars into the bloodstream which then has an effect on the body’s overall ability to regulate blood sugar levels.

The hormonal system requires such a delicate balance that caffeine’s negative effect on the adrenals can’t help but create hormonal challenges in the body over time. Dr. Bruce Rind MD, a holistic endocrinologist notes that the health of the thyroid gland and the adrenal glands are inextricably linked. If one goes south, the other one probably will too.

So the next time you reach for that cup of joe, chocolate bar, espresso, or energy drink, think about the picture above with all the spikes and points and imagine what this plant pesticide is really doing to your insides.