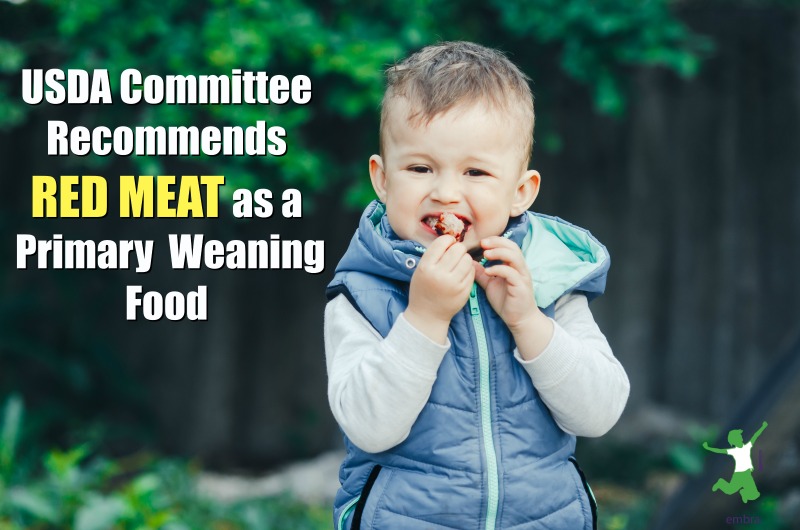 The USDA is on the brink of issuing dietary guidelines for children under age 2 for the first time ever. In a welcome move that has predictably caused plant-based special interest groups to lose their collective mind, the Federal committee advising on the matter is recommending red meat including liver, eggs, seafood, and dairy as primary foods.

At first glance, the suggestions may seem to be coming out of left field. However, the weaning foods list has much in common with the guidelines for baby first foods issued by Health Canada in 2012.

According to the Wall Street Journal, the advisory committee composed of 20 academics and doctors released its recommendations over the summer. The U.S. Department of Agriculture and the Department of Health and Human Services will review them and issue final guidelines by the end of 2020. (1)

The committee included a number of nutritional heavyweights such as Kathryn Dewey of the Department of Nutrition at the University of California, Davis. She was the chair of the birth to 24 months subcommittee.

Not surprisingly, the recommended food through age six months is exclusively breastmilk. The experts from all food philosophies agreed on that point at least.

Beyond that, primary weaning foods for 6 months through age 2 include meat, seafood, eggs, and dairy. The inclusion of these foods early get babies’ taste buds and habits in a healthier pattern right away, according to Sharon Donovan, committee member and professor of nutrition and health and the Univerity of Urbana-Champaign. (2)

Focus on Animal Foods for Baby

The most contentious aspect of the dietary recommendations for babies under 2 was the focus on animal foods.

For example, the Physicians Committee for Responsible Medicine, a nonprofit organization that advocates plant-based diets, vehemently disagreed with this emphasis at the expense of plant foods.

Susan Levin, a registered dietitian and the group’s director of nutrition education said that the scientific evidence isn’t there that infants would be better off consuming meat, seafood, eggs, and dairy. Instead, she said that young toddlers and babies can get iron from fortified cereals, spinach, and lentils.

Unfortunately, Ms. Levin’s perspective seems clouded by the plant-based globalist agenda. She ignores the fact that young children do not easily digest carbohydrate-rich plant foods especially if raw. Even cooked, these foods are problematic. A baby’s digestive system prior to age one produces little to no amylase, the enzyme necessary for absorption.

For example, the traditional first food in some African cultures is raw liver. The infant’s mother would pre-chew small amounts and then feed it to her baby.

Soft boiled egg yolks are also an ideal choice as a baby’s first food as they supply ample iron as well as choline and arachidonic acid which are critical for optimal development of baby’s brain which grows at its most rapid rate the first year of life. Choline is critical for vision development. No plant foods provide these critical, brain-building nutrients in the small amounts a baby would eat.

Even the vegetarian option offered by the committee includes eggs. Dr. Dewey, chairperson of the committee explained the reason with these words:

A totally vegan diet at this age is really not going to meet nutrient needs unless you use a lot of fortified products.

Fortified foods are best avoided because they are typically ultra-processed. This means that they contain additives such as added sugar, preservatives, artificial flavors, and/or colors. Getting babies and young toddlers used to these foods early may risk a processed food addiction later at the expense of fresh, homeprepared foods.

One of the most confusing aspects of the committee’s recommendation for baby weaning foods is the inclusion of red meat and liver. This is because the USDA misguidedly advises against these foods for adults.

The reason the committee included these foods is due to worrying numbers of iron and zinc deficient toddlers and babies.

According to data analyzed by the committee, more than three-quarters of breast-fed infants ages six to 12 months don’t consume enough iron. Moreover, 54% of this same group don’t get enough zinc.

Three important sound bites from committee and other experts on the need for red meat and even liver in a baby’s diet include: (4)

As a Mom who ignored the misguided recommendation of fortified rice cereal and other grains as weaning foods and opted instead for red meat, liver (as chicken liver pate), soft boiled egg yolks, grassfed dairy, and homemade soups for my three children (with excellent results), I am happy to see that, at least at the committee level, members are resisting the lure of politically correct nutrition by emphasizing the importance of animal foods for growing children.

Let’s hope that agenda-driven special interests don’t torpedo these recommendations before they become official in the coming months.

Even if the bureaucrats cave and remove these animal foods from the final USDA dietary guidelines, this article can serve as a record for parents that the committee of experts advised otherwise!