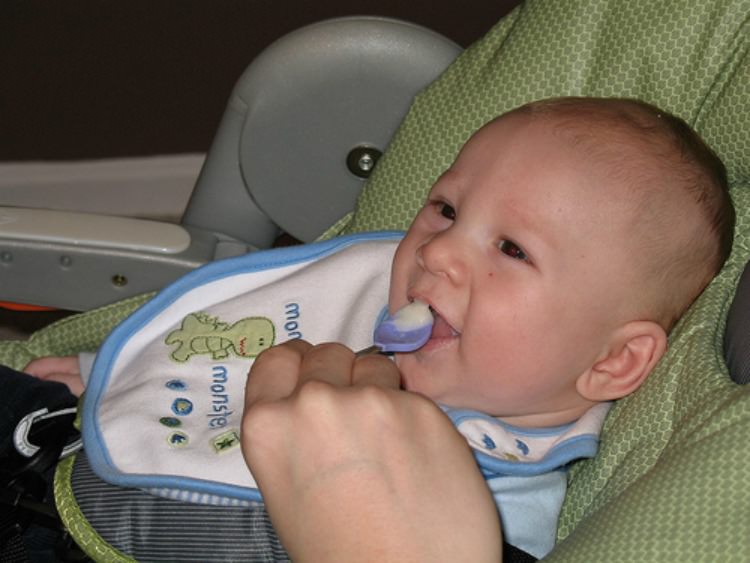 One of the most misguided and damaging pieces of advice coming from the vast majority of “experts” is to give rice cereal as a baby first food around the age of 4-6 months.  This advice is extremely harmful to the long term health of the child, contributing greatly to the epidemic of fat toddlers and the exploding problem of childhood obesity.

Rice cereal is never a healthy baby first food. Not only is it an extremely high glycemic food when eaten alone (spikes the blood sugar) but it also contains ample amounts of double sugar (disaccharide) molecules, which are extremely hard for such an immature digestive system to digest. The small intestine of a baby mostly produces only one carbohydrate enzyme, lactase, for digestion of the lactose in milk. It produces little to no amylase, the enzyme needed for grain digestion until around age one.

Now, at least one governmental body is waking up to the harmful notion of cereal grains as the “ideal” baby first food.

Health Canada in collaboration with the Canadian Pediatric Society, Dietitians of Canada and Breastfeeding Committee for Canada has issued new guidelines for transitioning a baby to solid food and two of the first weaning foods recommended?

While these guidelines are certain to rile vegetarian and vegan groups, the fact is that meat and eggs are indeed the best weaning foods for a baby. Not only are these animal foods extremely easy to digest compared with cereal grains, but they also supply iron right at the time when a baby’s iron stores from birth start to run low.

The inclusion of meat in these baby first food guidelines is in line with the wisdom of Ancestral Cultures which frequently utilized animal foods for weaning. A traditional first food in African cultures is actually raw liver which the mother would pre-chew in small amounts and then feed to her child.

The guidelines specifically note the role that ancient wisdom played in the decision to no longer recommend cereal grains and instead suggest meat:

While meat and fish are traditional first foods for some Aboriginal groups, the common practice in North America has been to introduce infant cereal, vegetables, and fruit as first complementary foods.

Soft boiled egg yolks are also an ideal choice as a baby first food as they supply ample iron as well as choline and arachidonic acid which are both critical for optimal development of the baby’s brain which grows as its most rapid rate the first year of life.

Unfortunately, while the suggestion of meat and eggs is a good one, the joint statement from Health Canada also inexplicably includes tofu and legumes which are both a terrible choice as a baby first food.

The starch in legumes would cause the same digestive problems as rice cereal and the endocrine-disrupting isoflavones in tofu would be a disaster for baby’s delicate and developing hormonal system.

But, let’s give credit where credit is due.At least meat and eggs are appropriately included on the baby first food list.

Good on you Health Canada! Perhaps your neighbor country to the South will wake up and get a clue about how to properly feed babies based on your lead.

I’m not holding my breath.