Healthy Home Economist / Healthy Pregnancy, Baby & Child / What You Need to Know for a Successful VBAC

What You Need to Know for a Successful VBAC 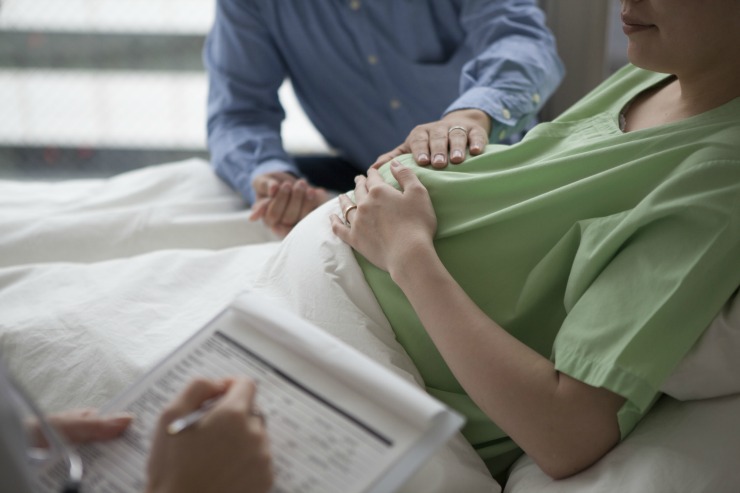 Want to have a successful VBAC (Vaginal Birth After Cesarean) if you must have a C-section the first time around? Read on!

When it comes to giving birth, a vaginal birth is certainly preferable to a C-section. Recovery from vaginal birth is much more rapid and involves less danger to the life of the Mother and child. After all, a C-section is considered major abdominal surgery with all the inherent risks.

In addition, there is evidence that children born vaginally are healthier than those born by C-section. Vaginal birth allows the child’s sterile gut to have first exposure to beneficial flora from the Mother during delivery. This exposure helps to properly seed the intestinal tract with immune system boosting bacteria.

Birth by C-section initially seeds the child’s gut with whatever bacteria are floating around the hospital environment. This leads to a higher risk for development of  auto-immune problems. These chronic issues include allergies, leukemia, type 1 diabetes, asthma and others.

Intravenous (IV) antibiotics during labor can also negatively affect the normal seeding of baby’s gut during vaginal birth. As a result, skipping the Strep B test is a good idea since women who test positive are frequently forced to have IV antibiotics. Unfortunately, this happens even though research has failed to demonstrate any benefit to antibiotic treatment during labor.

Another benefit of vaginal birth is that it involves a gradual and more tolerable increase in stress for the baby. This as opposed to a cold cut Cesarean which shocks and stresses the newborn in a very short period of time. The shock stress of a C-section potentially causes unfavorable DNA changes to the baby’s white blood cells (July 2009 Acta Pediatrica).

For these reasons, it is best to take steps to avoid C-section if at all possible. Having a natural birth at home or at a birth center and avoiding an epidural is one way to reduce C-section risk. Another is to know how to induce labor naturally if baby is late.

In addition, planning for future pregnancies to be VBAC is wise too. Planning for a natural birth with a midwife in attendance with avoidance of all drugs definitely helps skew the odds in Mom’s favor. One intervention typically leads to another, and then another. A domino effect to C-section is thus avoided by refusing all interventions unless deemed a medical emergency.

Sometimes, despite everyone’s best efforts, a C-section needs to be performed.  In these situations, C-sections are indeed a life saving operation.

Many parents do not realize that the doctor performing the C-section has a choice about how to stitch up the uterus following surgical birth.

The double layer uterine closure was primarily used throughout the United States prior to the early 1990’s.  The first layer of sutures pulls all the cut edges of tissue together. The second suture layer, called the “imbricating pattern”, pulls uncut tissue together on top of the first suture layer.

The single layer uterine closure has been used since the early 1990’s in the United States.  Europe also uses this technique extensively.  It involves suturing the cut edges together. Then, smaller sutures are used to stop any continued bleeding or to pull together areas of tissue that aren’t well counterbalanced.

Which Type of Uterine Suture is Best for a future VBAC?

In other words, each suture method has benefit as well as a downside.

The study authors concluded that the single closure method involves significantly higher risk of uterine rupture if the woman attempts a VBAC with a later pregnancy.

Since this study, prominent midwives in the US community have advocated use of the double layer closure to improve the odds of women attempting VBACs.  Some even believe that women who have had a single layer closure should not be allowed to plan out of hospital births or VBACS at all.

I heard a prominent US midwife interviewed on National Public Radio advocating the double layer closure. Her reason? This type of suture is a very good idea for women who desire a successful VBAC with future pregnancy.

Smaller studies have shown no difference in risk of uterine rupture between the two suture methods. But, the overwhelming results of the large study by Bujold remains a concern for many in the midwifery community. Hence the continued push for use of the double layer technique.

If a Mom is only going to have one child or her current pregnancy is her last, then the single layer closure is probably the best choice. This type of suture in the event of a Cesarean gives the best chances for optimal post operative recovery.

However, if Mom wants more children and wants to birth them vaginally, insisting on the double uterine closure in the event a C-section is best. This type of suture greatly improves her odds for a successful VBAC in the future. In fact, some OBs and midwives won’t even attempt a VBAC without it.

Governors Team With Hallmark to Pressure Parents to Vaccinate

The Toxic Effects of Water Birth on Mom and Baby