The insidious, little-discussed reasons why the elitist agenda for globalism promotes plant-based diets and avoiding meat, dairy and eggs to “improve your health” and “save the planet”. Nothing could be further from the truth. 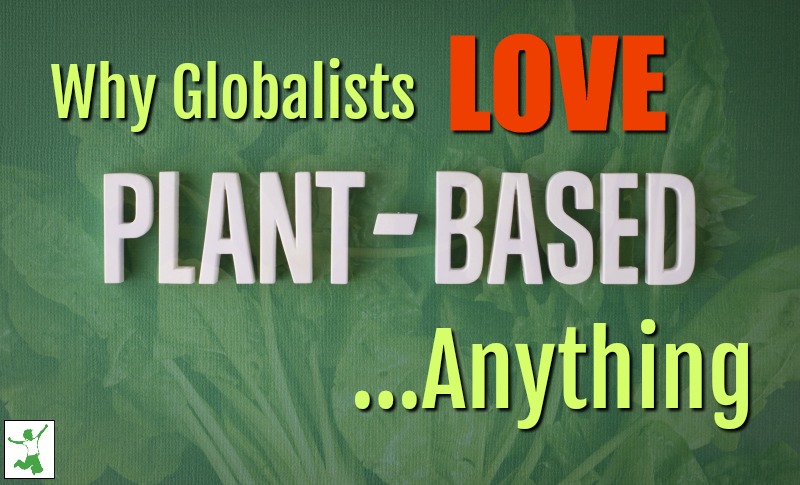 Most people think that globalism is a political ideology to be duked out at the ballot box. But, the truth is that it is much more than that! It is an all-encompassing worldview so personal that it seeks to convince you how to “best” feed yourself too. And, when it comes to food philosophies, the globalists are very much in favor of a plant-based diet.

In the paragraphs below, I briefly outline why plant-based eating is being pushed so heavily from every possible digital channel we encounter on a daily basis.

We and most alarmingly, our children, are being super-saturated with plant-based diet messaging packaged as indisputably true and scientific and astroturfed online by paid social media trolls or bots to intimidate real people into mental submission.

Be very careful about how this plant-based diet craze is affecting you. The truth about this food philosophy has nothing whatsoever to do with your health and everything to do with the promotion of a control-freak globalist agenda.

The globalist worldview believes that humans are destroying planet Earth. While I don’t necessarily disagree with this assessment, the globalist solution to this problem is rather brutal in approach…reduce the population.

Search online for quotations from globalists like Emmanuel Macron as one of many examples. Mr. Macron has, on more than one occasion, criticized large families, particularly those from Africa.

Please present me the lady who decided, being perfectly educated, to have seven, eight, nine children. (1)

Actually, I know quite a few, Mr. Macron. In fact, I am one of seven children myself, and my mother was a college graduate who enjoyed a very successful career as a school teacher before choosing to start a very large family.

Let’s examine how plant-based eating segues quite nicely with the globalist goal for the drastic reduction of female fertility rates.

Nowhere do plant-based diet proselytizers reveal to would-be vegans that a plants-only diet is new in human history.

Why? For the simple reason that ancestral societies observed that such manner of eating did not successfully promote the survival of their culture.

Except for a few scattered, tiny enclaves of religious cults over the centuries, veganism as an extended lifestyle has never been done before!

No worries, because guinea pig-dom is the favored state of globalists.

What we do know is that avoiding animal products in the diet will reduce libido and ultimately fertility.

No coincidence that subsisting on plants was, incidentally, the dietary prescription of the puritanical, anti-sex John Henry Kellogg, who believed humankind would be far better off with no libido for either men or women. (2, 3)

One guess what you don’t have without much libido? Right. Children!

Projections are that reducing the fertility of women to one child each would approximately halve the world population to 3.4 billion by 2075. This would be a very good thing according to the UN. (4)

By eating that plant-based diet, you are (perhaps unwittingly) supporting this very sinister global agenda. Think about that as you sit in the drive-thru burning fumes to grab an Impossible Whopper.

You’d be doing your health and the planet a lot more good grilling a real grassfed burger at home that you bought from a local pastured farm.

Modern science is well aware that vegetarians have significantly more girls than boys.

This is significant people! Eating vegetarian, a woman reduces her chances of having a boy by nearly 20%!

A vegan diet, which excludes all animal products, not just meat, would no doubt result in even fewer boys per 100 girl births.

Why does this happen?

The likely reason is that boy fetuses are known to be less robust than female fetuses and, as such, require a higher level of maternal nutrition to remain viable.

While there’s nothing inherently problematic with more female births, throwing off the natural statistical balance between male and female births most definitely is a problem.

First of all, it indirectly will reduce fertility further as these women have fewer available partners.

Secondly, globalists like to blame men for everything, so increasing female births is a good strategy to save the planet, right?

Note what former President Barack Obama said at a December 2019 talk in Singapore.

Now women, I just want you to know; you are not perfect, but what I can say pretty indisputably is that you’re better than us [men].

I’m absolutely confident that for two years if every nation on earth was run by women, you would see a significant improvement across the board on just about everything… living standards and outcomes. (6)

While more women world leaders would be awesome, having every nation on earth run by women would be just as unbalanced and undesirable as having them all run by men. All women leaders would just result in different, seemingly intractable problems, not the elimination of them.

This is because a properly run, family farm essentially integrates both agriculture and livestock in a balanced, naturally biodiverse manner. Foods from these types of farms are the most nutrient-dense and healthful for humans to consume. (7)

Guess what you need for a successful family farm?

Lots of children per family…the antithesis of the globalists’ agenda.

To feed the world a plant-based diet, multi-national corporations step into the void created by a lack of family farms producing sustainable pastured meat, milk and eggs that restore the soil and the environment.

Instead, scientists synthesize our food in a lab (aka plant-based meat and milk), adding synthetic nutrients that have low to no bioavailability.

People nourished by lab-created foods are less healthy and robust than those consuming natural, nutrient-dense foods. This further supports the globalist corporatocracy by shuttling people down the cradle to grave medical path, making it nearly impossible to function without a pharmaceutical dependency of one kind or another.

It also concentrates the wealth in the hands of the few instead of the many…but that is another discussion for another day.

I’ve only touched on three reasons why the heated push for plant-based eating clearly aligns with the globalist/elitist agenda.

Just keep this in mind the next time you see an astroturfed message that plant-based diets are the healthiest way to eat. Watch out for the latest term “flexitarian” to lure more omnivores into the sticky web of false plant-based nirvana.

Do you still think this line of thinking is a stretch? Consider that the menu for the 2020 Golden Globes will be 100% plant-based to satisfy the virtue-signaling needs of all the overpaid, bubble dwelling Hollywood elitists who will attend.

The sad truth is that most people just believe whatever they are told. They will embrace a plant-based diet to the detriment of their health, which sadly, won’t begin an inevitable decline for a few years until serious issues crop up from nutritional deficiencies.

Don’t let that be you. Think for yourself, be critical and extremely skeptical of the plant-based mania. Beware of “health” books promoting a plant-based diet. They have an underlying agenda and freely distort the evidence to manipulate the public such as the baloney in Blue Zones.

Look at history. Dead people don’t earn profits or seek to manipulate and control. See what the anthropological evidence from over a dozen cultures around the world has to tell you about plant-based diet utopias.