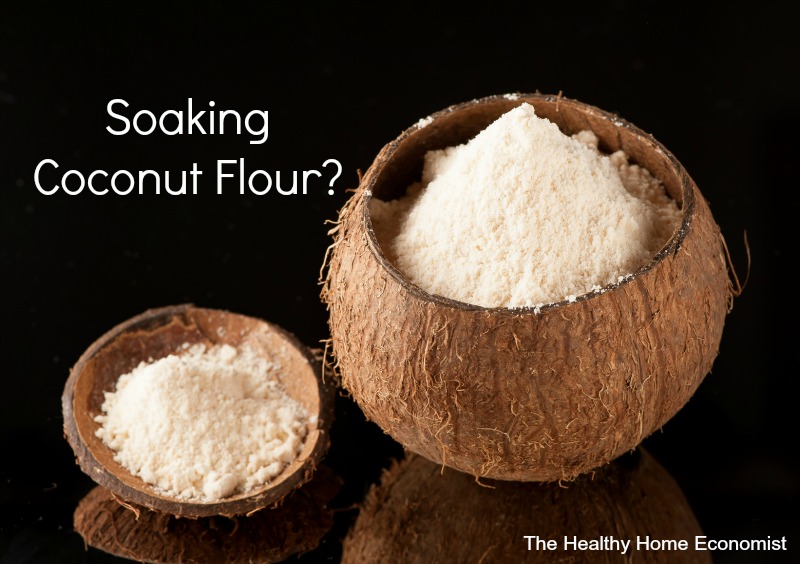 An increasing number of folks are using coconut flour these days as a low carb alternative to grain based flours. Coconut flour is disaccharride free and, as such, an acceptable flour for baking when one is following the GAPS

Coconut flour is also Paleo/Primal friendly for those who eschew grains in general as something that was not originally part of the human diet during pre-agricultural times.

A subscriber recently emailed to ask if she should be soaking coconut flour before baking like other flours such as wheat, spelt, and oat.

Even gluten free flours like teff, rice and quinoa are recommended for soaking overnight in an acidic medium such as buttermilk or yogurt.

Soaking flour helps to break down the antinutrients and greatly improve digestibility and nutrient absorption. Sprouting also helps as well.

Coconut flour is derived from the coconut, however, which is not a grain. A coconut is neither a nut although it is a distant relative of tree nuts.

Technically speaking, the coconut is a drupe, which means that it is a fruit with an outer fleshy part which surrounds a hard pit or seed in the center. Besides the coconut, other familiar examples of drupes include mangoes, apricots, olives, and pistachios.

In his article Living with Phytic Acid, author Rami Nagel addresses the issue of phytic acid in coconut flour. Phytic acid is the most well known antinutrient in grains, nuts, seeds, and beans that is reduced by soaking.

In this article, Mr. Nagel states that

“We do not have enough information about the preparation of coconut flour to say whether soaking reduces phytic acid, but as with other phytic-acid containing foods, the likelihood is that it is at least partially reduced.”

As a result, based on the fact that no research is indicative of the benefits of soaked coconut flour and the fact that it is a low phytate containing drupe and not a seed, nut, grain, or bean, I have chosen at this time to not soak my coconut flour prior to baking.

When Soaking Coconut Flour is a Good Idea

However, if a person is on the GAPS or SCD diets and eating coconut containing foods several times a week, it might be wise to use soaked coconut flour prior to baking just as a precautionary move until more research is done to corroborate Mr. Nagel’s hunch that soaking probably reduces the phytic acid content of coconut flour at least partially.

In essence, then, the goal with regard to phytic acid is not to completely eliminate it from the diet but rather to keep it at manageable and acceptable levels.    Soaking those foods that are naturally high in phytates such as seeds, nuts, legumes, and grains and only soaking other foods that are eaten frequently but are low in phytate in comparison such as coconut flour seems a reasonable approach to meeting this overall dietary goal … at least until more research is done!