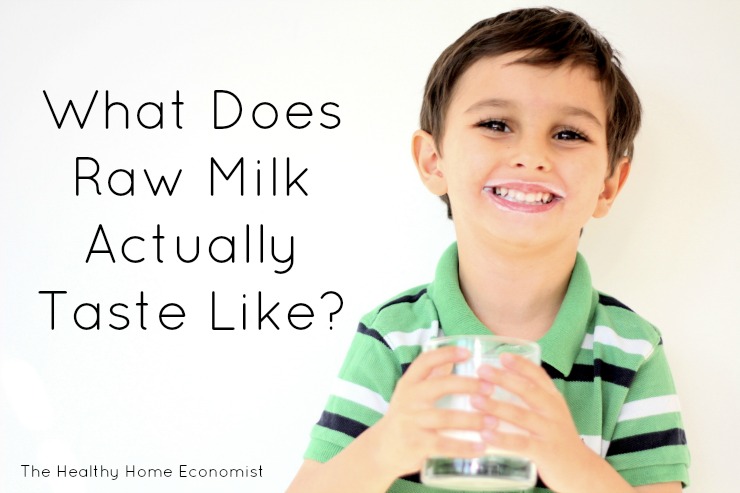 I was offered raw milk for the very first time as a teenager at my uncle’s dairy farm in Chautauqua County, New York. I had spent the afternoon riding his beautiful palomino all over the rolling hills of the spacious farm and was feeling very hot and sweaty (and thirsty!) by the time I returned in the early evening.

A large, stainless steel pitcher sat in the middle of the dinner table filled to the rim with cold, frothy milk. It looked so inviting. I still vividly remember the condensation from the pitcher dripping onto my Aunt’s red checkerboard tablecloth.

My uncle asked me if I wanted a glass.

I knew what it was. My mother had warned me about it.

It was raw milk. Straight from the cow.

I quickly shook my head and emphatically said “no”.

I imagined that the milk would somehow taste horrible, scald my throat and make me keel over on contact.

My uncle smiled understandingly and told me that the milk tasted great and that I would enjoy it. I was tempted to try some despite the workings of my overactive imagination. But the warnings from my mother that raw milk was dangerous overpowered my curiosity.

To this day, I regret never trying Uncle Harry’s raw milk. The farm has long since been sold and my Uncle has passed away, but that nagging sensation that there was something about that milk I needed to know and experience firsthand never quite left me.

Fast forward several decades. My family has been drinking raw milk now for over 15 years. It is the only milk my children have ever known. In fact, they won’t touch pasteurized versions preferring to drink water if the Real Thing isn’t available.

So what changed my mind about raw milk? Why do I drink it today and wouldn’t touch it as a teenager?

The Truth about Raw Milk

When my first child (who is about to turn 18) was being weaned from breastmilk at the age of two, I started researching options for the best and most nutritious beverage that he could consume. This search after months of reading and soul searching (and a brief stint with soy milk) led me to a grassfed dairy farmer from Pennsylvania. There was no better option for my growing child than clean, nutritious raw milk from healthy cows grazing on unsprayed pastures. It is one of the safest foods your children could possibly consume according to CDC data.

The FDA website identifies pasteurized milk as the most allergenic food in America. Raw milk is different, however. Raw milk nurtures and grows children’s immunity with superior nutrition, naturally occurring probiotics and enzymes that protect them from asthma, allergies and many other ailments. Research has repeatedly confirmed this to be the case.

I’ve never regretted making the choice for raw milk for my family. In almost 18 years, my children have never needed antibiotics. Neither do they suffer from allergies or other autoimmune issues. I even drank milk when I was pregnant and lactating with my two youngest children. CDC data again confirms that this is a safe choice despite media reports to the contrary.  Raw milk helped preserve my own health from the nutrient drain and resultant fatigue that having multiple children can often cause for some women.

You can talk about the benefits of raw milk until the cows come home, but the bottom line is taste.

How in fact does raw milk taste?

If it doesn’t taste good compared with processed milk, all the safety and nutrition data in the world don’t matter. People won’t keep drinking it long term.

The good news is that raw milk taste, is, well, fantastic!

It really is hard to describe exactly how amazing until you try it for yourself. I’ve had some friends describe the taste like melted vanilla ice cream. This is a good description, but I don’t think it quite captures the freshness aspect of raw milk.

The way I try to explain it to people in a way that they can understand is by using orange juice as a familiar example.

We all have tasted processed orange juice from the store, right? Well, compare that to orange juice that is fresh-squeezed right in your own home. I’m not talking about the orange juice in the carton in the supermarket that claims to be fresh-squeezed. That stuff is actually pasteurized.

I’m talking about orange juice that you squeeze yourself in your own kitchen or get at a juice bar where the oranges are squeezed right in front of you.

Truly fresh, raw orange juice tastes amazing, does it not? There really is no comparison to processed orange juice from the store whether it comes in a carton falsely labeled “fresh squeezed” or reconstituted from a can with water.

Take that experience of tasting raw orange juice versus processed orange juice and apply it to milk. Hopefully, you can see that it is no exaggeration to say that raw milk taste is far better and fresher than processed milk even if it is organic.

Have you tried raw milk yourself yet? I hope you get to try some soon if you haven’t already. It is worth the leap.

Check this raw milk finder to find a farm near you!

If you live in Canada, you can legally drive across the border to the US, buy raw milk and return home as long as it is for personal consumption only.