Healthy Home Economist / Archives / Green Living / Should You Use a Pressure Cooker?

Should You Use a Pressure Cooker? 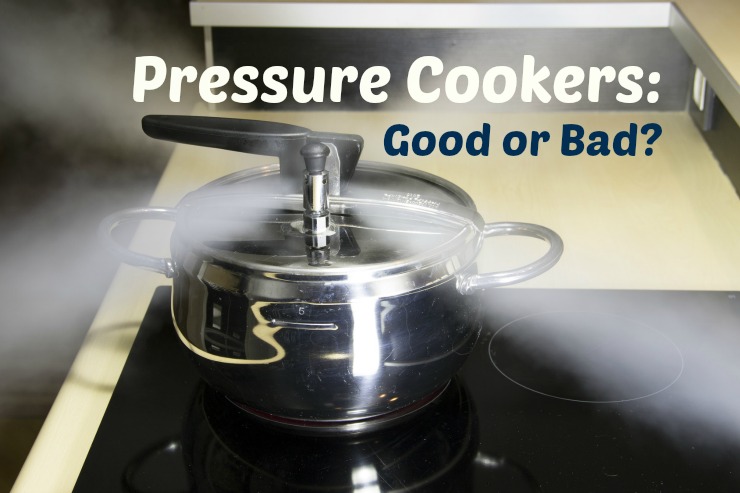 I am frequently asked by email and in the comments section of recipe posts if a pressure cooker to prepare meals or bone broth is a safe way to cook food.

I’m really glad to see that people are using their critical thinking skills and asking these types of questions. This is far preferable to immediately jumping on the bandwagon of a more convenient technology without giving it a second thought.

The equipment and method we choose to cook food definitely have the potential to impact not only the nutritional profile but also overall exposure to toxins.

For example, most health-conscious people pass on Teflon coated cookware and bakeware these days and for good reason – they give off dangerous fumes when heated among other problems. The nonstick aspect, while more convenient, is just not worth the toxin exposure.

I’ve written before about the excessive EMF danger from induction cooking which is why I decided to pass on buying one despite the beneficial aspects of faster, more even cooking and a cooktop that doesn’t get too hot.

I also never turn on my microwave oven even though I have a perfectly good one in my kitchen (they make a great airtight storage cabinet for baked goods though).

What about pressure cookers like the Instant Pot for making bone broth? Wouldn’t they be just fine?

Traditional foods expert Sally Fallon Morell, author of Nourishing Broth, features pressure cooker bone broth recipes in her book even though she herself does not use one.

Let’s take a look at both sides, pro and con.

What is a Pressure Cooker?

French physicist Denis Papin invented pressure cooking in 1679. He discovered how to cook food faster by simply increasing pressure inside the pot. He accomplished this by mechanically sealing the lid. This prevented the steam from escaping during cooking.

The result of increasing pressure is that water boils more slowly. In other words, it takes a higher temperature for steam to be created. This is important because water molecules are an essential component of all foods. Hence, the higher boiling point of water inside a pressure cooker means the heat transfer through the food occurs more rapidly. This reduces cooking time because the liquid water is hotter before it reaches a gaseous state at the boiling point.

If this seems unnatural at first, it really isn’t. Water naturally boils at a lower temperature in the mountains (190 °F/ 88 °C) than at the beach (212 °F/ 100 °C). This is due to the reduced air pressure at high elevations. This is why mountaineers carry oxygen with them on particularly steep climbing expeditions. The air becomes thinner the higher up you go (i.e, lower in pressure).

From a cooking perspective, food naturally takes longer to cook in a mountain lodge versus a beach house simply because the water molecules in the food don’t get as hot before turning to steam which slows down the heat transfer through the food.

A modern pressure cooker uses this basic principle of chemistry to a homemaker’s advantage by increasing the boiling point of water to around 225 °F/ 107 °C), slightly higher than what naturally occurs at sea level. This keeps the water in liquid form at a slightly higher temperature than normal which improves the speed at which the heat transfer through the food occurs via water molecules.

The Pros of Pressure Cooking

We’ve established that pressure cooking is a natural process given that pressure on food while cooking varies considerably around the globe anyway depending on elevation.

But, how does using a pressure cooker effect nutrients since the water is artificially kept in a liquid state at a higher temperature during cooking? Once again, the news is very positive. Here is a quick summary:

My friend Kristen has written this excellent article that summarizes the effects of a pressure cooker on food if you’d like to learn more.

The Pressure Cooker Problems that Won’t Go Away

While there are so many positives on the use of a pressure cooker and the science seems solid that using one is beneficial to the cooking process as compared with regular stovetop cooking, I still choose not to use one.

First of all, most pressure cookers that I’ve examined are made of stainless steel. The heavy metal leaching dangers of cooking acidic foods in stainless steel cookware is very real. I wanted an appliance that I could cook any food in – acidic or not. This is why I chose a Vita-Clay (I actually own two!).

Secondly, I passed on a pressure cooker because I have not found conclusive research that refutes my concern that pressure cooking may, in fact, dramatically increase the glutamine in cooked foods, most particularly the potential for MSG in bone broth.

Glutamine is a conditionally essential amino acid that is critical for gut, brain and immune health. It is found naturally in healthy foods and should theoretically not be a problem in normal metabolic situations.

The problem develops when glutamine gets past the blood-brain barrier and is metabolized to glutamate. In healthy individuals, this process is tightly controlled by the body. Glutamine is supposed to convert as needed to either glutamate, which can excite neurons, or to GABA, which has a calming effect.

Glutamine is not MSG

MSG differs from glutamate by a single sodium atom attached to the molecule. MSG is widely added to processed, packaged and fast foods in order “wake up” flavors. The truth is that removing the MSG from processed foods makes them tasteless and unappealing. This is why food manufacturers hide it on ingredient lists under aliases such as yeast extract, natural flavorings, hydrolyzed protein, protein isolates, and spices. There are up to 50 MSG aliases used by food manufacturers, with new ones being constantly created to stay ahead of the consumer.

Some of the MSG in processed foods is artificially added, but much of it is actually a residue of hydrolyzing and other modern and rather violent processing methods which means it won’t appear on the label. Protein powder is a notorious offender. Don’t be fooled because products labeled with the words “No MSG” may actually still contain it (4).

As a result of so much MSG in the food supply, many people have become overly sensitive to it to the point where even the natural glutamine in traditional foods like bone broth can trigger headaches (most common symptom), gastrointestinal upset, fatigue or other problems.

Neither Sally nor I use a pressure cooker, but we know many people who love them.   Pressure cookers seem to help achieve the gelatin we value so much.   In terms of nutritional value,  we have not done comparison testing of pressure cooker broth vs stockpot vs slow cooker.   We’d love to do lab testing for a long lists of nutrients, but that gets very expensive very fast.    If you know anyone who’d like to give us about $20,000 for a small study, we’d like to move forward with that testing.     In the meantime, I see no reason for you to stop using your pressure cooker.     However, we do question pressure cooking  for 5 hours.   I think most recipes say 1 hour though I’ve seen some recipes that recommend up to 3 hours (5).

Should You Use a Pressure Cooker or Not?

However, if you are like me and prefer a gently gurgling traditional clay pot with no leaching issues over a pressure cooker, then have at it! Until a specific study is done to comparatively test the nutrients, heavy metals, and glutamines in pressure cooked broth, then stay with the tried and true for the time being.

As more information and research becomes available on pressure cookers and the effects on bone broth, I will keep you all informed.

Is Sustainable Salmon Safe? How Does it Compare to Wild?

The Life of the Lowly Dry Cleaning Hanger

Bone to Pick with the Lead in Bone Broth Study