The important reasons why bringing an induction stove into your home should be approached with caution as this technology is a source of excessive EMF toxicity as confirmed by scientific study. Even induction stove user manuals warn against standing too close! 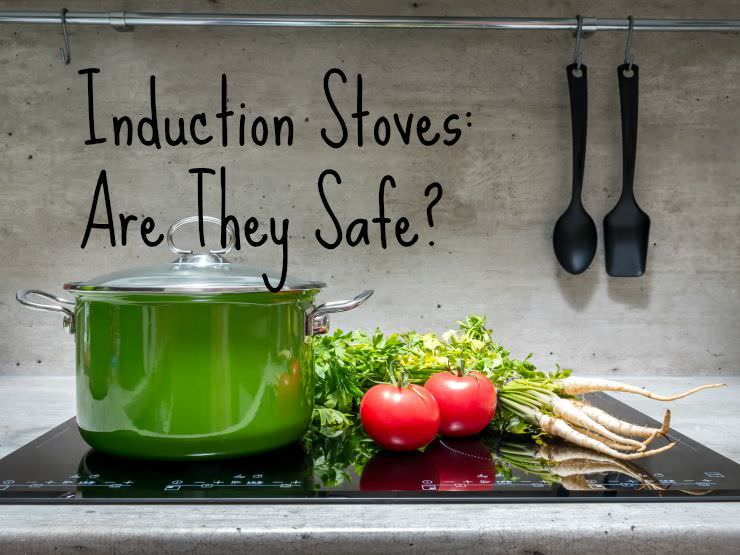 Buying a kitchen stove is a rare purchase most people make only a few times in a lifetime. Currently, the trend toward replacing electric cooktops with an induction stove is quite popular. Is this a wise purchase? Let’s take a look …

In our home, we purchased a glass top stove in 1997 when we completely remodeled the (very old) kitchen. At that time, the range we selected boasted the latest and greatest technology which included a glass top cooking surface. We were upgrading from a tiny 1950’s stove (see picture below) that while it seemed to fit very well with the orange, 1970’s style wallpaper and canary yellow cabinets (no kidding), it was not something we regretted replacing!

While this new range was awesome (so nice not to have to clean up messes under coil burners anymore!) and has served us well for many years, it recently came time to replace it when problems developed.

Since we had upgraded to the best technology many years earlier with good results, we thought we should probably do so again. This involved the purchase of an induction stove with all the bells and whistles. The upgrade hopefully would make my many hours spent in the kitchen even more efficient.

Since indoor air-polluting gas stoves were thankfully not an option for our neighborhood, electric was our only choice. We made the rounds to Best Buy, Home Depot, and online to see what was available.

We eventually settled on a stainless steel induction stove. It offered nearly all the latest technology of the (amazing but ridiculously expensive) Viking stoves that celebrity chefs use but with a much more reasonable price tag.

This is the stove we originally picked. I particularly liked the extra-large knobs and oversized glass top that prevented spills from trickling down the crack between the stove and the countertop. It was exactly what I was looking for.

We also decided to get the matching convection oven (that also functions as a toaster) that sits over the top of the induction stove to replace our old microwave oven that I only ever used for storage anyway. This would give me more counter space as I could get rid of the countertop convection/toaster oven we were currently using that was on its last legs too.

Really excited about our upcoming purchase, I posted about it on social media to see if anyone had any further input.

Right away, a couple of comments got my attention.

Jeanette K. said, “My mother’s induction stove was measured by EMF professionals and had extreme readings.”

In addition, Beth H. warned that  “The only downfall [with an induction stove] is that you have to use pans that magnets can stick to”.

So glad I asked for the input!  Neither of these concerns about induction stoves was mentioned by the salespeople I spoke to or the marketing material I had reviewed.

Since I frequently cook with glass, having to only use pans that magnets can stick to would be a serious downside of having an induction stove because it would require me to purchase some new cookware and bakeware which I really didn’t want or need to do.

But, it was Jeanette’s comment about the EMF dangers of an induction stove that really gave me pause. EMF overexposure is a huge concern of mine that I’ve written many articles about.

We take great pains in our home to minimize excessive EMF exposure such as turning off wifi at night, using radiation canceling cases and headsets for our cellphones, and EMF shields for our PCs and notebooks. I also avoid dirty electricity in our home by never using dimmer switches or fluorescent bulbs.

In addition, we use battery power for our electronics as much as possible. Higher EMF exposure occurs when you use a laptop while it is plugged in, for example.

When I started examining the technology behind an induction stove, I was more than a little shocked and incredibly grateful Jeanette had commented about it to clue me in to do further research.  Here’s what I found out:

The technology of an induction stove works by alternating magnetic fields that generate heat in a cooking vessel made of ferrous metals. The benefits of induction cooking as opposed to thermal heating with a traditional stovetop include up to 50% faster and more even cooking of the food and slightly reduced energy usage. Parents of young children like it because the coil itself underneath the glass stovetop doesn’t actually get hot. This means the cooking surface stays cool and won’t burn little hands or steam up if you spill liquid on it.

While it is extremely controversial whether this type of radiation source is actually dangerous, the data is sufficient enough for me to avoid it. The latest information I found that should give anyone pause about bringing an induction stove into their home was published by the Journal Bioelectromagnetics in 2012. (1)

The study authors concluded that most induction hobs (rings) exceeded even the high 1998 maximum exposure levels set by the International Commission on Non-Ionizing Radiation Protection (ICNIRP) when a person was standing close to the induction stove.

The worst-case scenario was an up to 16-fold increase from these maximum exposure levels!

I don’t know about you, but I don’t cook standing at least a foot away from my stove. My arms definitely aren’t long enough!

In fact, this would be pretty much impossible if you needed to reach the back burners.

Don’t Use a Microwave? You Won’t Want Induction Either

The bottom line is that if you avoid microwaved food and microwaves in general, you will want to pass on the induction stove as it uses similar technology.

I’ve not used a microwave in 25 years (and not missed it for a second, I might add). Why would I start now exposing myself and my family to potentially dangerous, concentrated sources of EMFs with an induction stove which works in a similar fashion?

Of course, induction stove manufacturers insist the technology is safe. They claim that the radiation hazard dissipates within a few inches to a foot of the appliance. “Normal usage” would not expose a person to a radiation hazard.

Fortunately, the exact same stove I wanted was available in a traditional, thermally based cooktop without an induction feature. This is the case with all the induction ranges I examined in fact!

This is the electric stove model we eventually bought based on excellent consumer reviews. As a bonus, it much more easily fit within our budget.

Sometimes the latest and greatest isn’t always the best or even the safest.

The Truth about Takeout